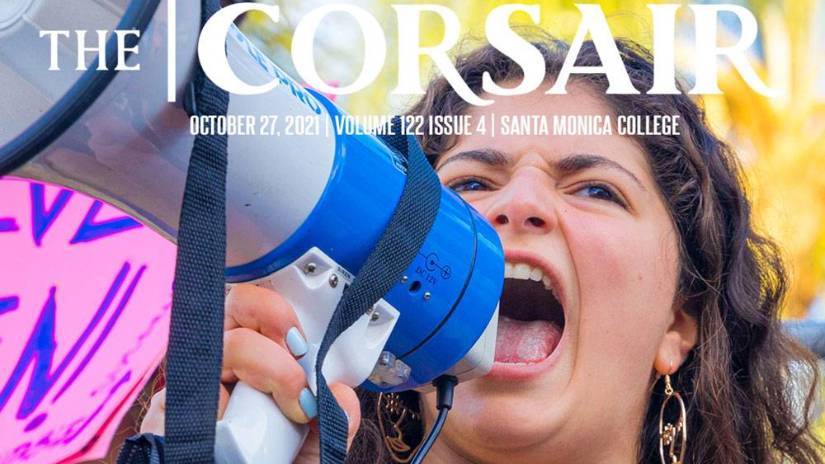 In addition, SMC student Guadalupe Perez was one of two student journalists recognized by the Society of Professional Journalists Los Angeles (SPJ/LA) as a student journalist honoree for 2022, at the society’s Distinguished Journalists Awards Banquet on Oct. 19 at the Omni Hotel in downtown Los Angeles. This past weekend, SMC journalism professor and Corsair adviser Ashanti Blaize-Hopkins was also elected by SPJ as national vice president—Blaize-Hopkins is the first Black woman to be elected SPJ vice president in the organization’s 113-year history.

And in the College Photographer of the Year awards judged Oct. 22 - Oct.29 at the University of Missouri, Corsair contributor Ethan Swope won awards/or was a finalist in a number of categories: Award of Excellence, Portrait; Finalist, Interpretive Eye; Award of Excellence, International Picture Story; and Finalist, Interpretive Project. Swope is also the White House News Photographers Association’s Student Still Photographer of the Year.

Here is a complete listing of the JACC, Pinnacle and other recent awards won by The Corsair and its staff:

At the Fall National Media College Media Convention held Oct. 26 – 30 in Washington, D.C., The Corsair and its journalists won the following awards from the Associated Collegiate Press:

Associated Collegiate Press, with more than 570 members, is a national community of collegiate journalists and collegiate-journalism advisers. To learn more visit studentpress.org/acp.

Among the nationwide Pinnacle Awards announced by the College Media Association on Oct. 27, 2022 in Washington D.C., The Corsair & its photojournalists won the following:

For more information on the Pinnacle Awards visit, collegemedia.org/contests/pinnacle_awards.  The voice of collegiate media and its advisers, College Media Association—which gives out the Pinnacle Awards—was founded in 1954 and now has more than 700 members (the people who advise the nation’s collegiate media newspapers, yearbooks, magazines, broadcast, and electronic media and their staffs) from coast to coast.

Founded in 1955, JACC is a nonprofit on the cutting edge of journalism education, bridging the gaps between students, educators, and publications by providing networking and educational events aimed at inspiring members at each stage of their journalism career. To learn more about the JACC visit jacconline.org.

"Santa Monica College journalism students put their hearts and souls into news stories, photos, videos and social media posts for the Corsair newsroom,” said SMC journalism professor Sharyn Obsatz, a faculty adviser to The Corsair. “I am thrilled their efforts are recognized by these esteemed awards—I urge everyone to check out their reporting at thecorsaironline.com, @corsairnews on Instagram, and issuu.com/corsair.website.”

Prof. Burkhart, who is the photojournalism adviser, stated that The Corsair’s photographers, writers, and editors “never fail to produce quality news and professional level work to inform the Santa Monica College community.” “I am proud of the group and individual honors won by the Corsair staff. They richly deserve the recognition,” he added.

Santa Monica College is a California Community College accredited by the Western Association of Schools and Colleges (WASC). The Corsair staff produces a bi-weekly newspaper in the spring and fall semesters, currently available on issuu.com/corsair.website, online at thecorsaironline.com. Follow The Corsair on Instagram @corsairnews.