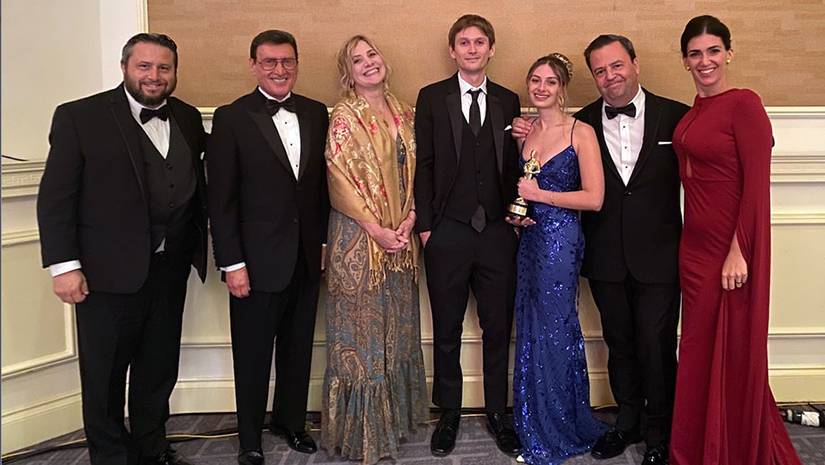 Selected out of Three Finalists by Russo Brothers, “a story that humanizes the historical tragedy of the Triangle Shirtwaist Factory Fire of 1911”

Written and directed by SMC Film Production student Alessia Crucitelli and produced by Andrew James Levay & Catharine Dada, “Leaving the Factory” focuses on the story of the mistreatment of Italian immigrant women factory workers, and their struggle to overcome oppression. The film stars Italian actress Roberta Sparta (who attended the gala) and co-stars Anne Bedian and Roberta De Santis.

Upon conferring the award to "Leaving the Factory," a videotaped message recorded by the Russo Brothers was played in front of the crowd of approximately 1,000, in which they said: “[The filmmakers have created] a story that humanizes the historical tragedy of the Triangle Shirtwaist Factory Fire of 1911, which caused the death of more than 120 women and girls who were trapped inside the facilities. A major focus of Alessia's film is to change how Americans view the early history of feminism and worker rights by examining the important contributions that Italian textile worker women made on behalf of the movement... our heartfelt congratulations, thank you for this incredible film!"

"The film is a masterpiece in my opinion and tells a little known story that needed to be brought to light,” said SMC Superintendent/President Dr. Kathryn E. Jeffery. “The writing, acting, set design, costumes, and music created a captivating sensory experience. So proud of our students, technical teams, faculty, and all associated with this beautiful, poignant storytelling vehicle!"

Writer/director Alessia Crucitelli stated that she was “beyond grateful to the Russo Brothers and the SMC Film Production Program for this incredible opportunity.” “My goal is for this story to be seen by as many people as possible and having their support will help a lot to achieve this goal,” she added. “I feel like I'm in a complete dream right now and I am so happy I got to have this experience with my producers, Andrew and Catharine, our SMC Professors Salvador Carrasco and Simone Bartesaghi, and lead actress Roberta Sparta by my side!”

Producers Andrew James Levay & Catharine Dada said that this film was “about a group of women who died protesting for equal rights. They deserve to have their story and legacy live on, and it’s a blessing for their story to be recognized as the winner of The Russo Brothers Italian American Film Forum.”

“We had the opportunity to directly put into practice all the technical elements of filmmaking that we learned in our film classes at SMC, adding in the real-life and necessary skills of persistence, patience and professionalism,” they said in a joint statement. “We learned with top of the line equipment and under the guidance of our professors who are seasoned in the field and it shows in every aspect of the film. We are deeply proud of the work of our whole class!"

SMC film production faculty lead Salvador Carrasco reminisced that one of his main motivations when he was hired by SMC in 2010 to lead the college’s efforts in creating a new Film Production Program, was “to help dispel the cultural skepticism—if not outright bias prevalent in our society in general and in the film industry in particular—towards the quality of cinema that can come out of a community college.”

“I feel very strongly about our mission because education shapes individuals, and if someone cannot have access to a high level of education due to financial constraints, it is the responsibility of our democratically elected government and academic institutions to provide it at the lowest possible cost,” said Carrasco. “The fact that ‘Leaving the Factory’ (in many ways the quintessential SMC film) has won this prestigious award at the Russo Brothers Film Forum competition in our country’s capital proves my point. I am very grateful for this recognition, a testament to the work of our students, mentoring faculty, loyal staff, and all who believe in what we do at the SMC Film Program!”

Carrasco also gave a shout out to Keslow Camera and the Hollywood Foreign Press Association for their invaluable support. “May there be many more groundbreaking SMC films to come!” he added.

The two other finalists in competition were “Rossi & Company” by Agata De Santis, and “Defending the Peninsula” by Charles Vincent Sabba. The viewing was followed by a Q&A with the filmmakers after the showing, moderated by Taylor Taglianetti, founder and president of the National Organization of Italian Americans in Film and Television (NOIAFT).

The Russo Brothers, who organized the competition, are best known for directing four films in the Marvel Cinematic Universe (MCU). One of them, Avengers: Endgame (2019), grossed over $2.8 billion worldwide, becoming one of the highest-grossing films of all time. Thanks to their successes in the MCU, the Russo brothers are considered the second most commercially successful directors of all time, behind Steven Spielberg.

Santa Monica College was named one of MovieMaker’s 40 Best Film Schools in the U.S. and Canada of 2022, and one of the top 12 in the U.S. West and Northwest alongside Stanford University, UCLA, USC, ArtCenter College of Design, and California Institute of the Arts, among others. And Hollywood Reporter flagged SMC as one of eight excellent low-cost alternatives to top-25 film schools based at private universities.

SMC offers an Associate in Science degree and Certificate of Achievement in Film Production. To learn more, visit smc.edu/filmproduction or email Carrasco_Salvador@smc.edu. The film program—as well as the films that come out of it— is on YouTube as the “Santa Monica College Film Program” channel.

Santa Monica College is a California Community College accredited by the Accrediting Commission for Community and Junior Colleges (ACCJC) of the Western Association of Schools and Colleges (WASC). For 31 consecutive years, SMC has been California’s leading transfer college to UCLA, UC Berkeley, and other University of California campuses. The college also tops in transfers to the University of Southern California and Loyola Marymount University and is the top feeder west of the Mississippi to the Ivy League Columbia University. In addition to the award-winning Film Production Program, more than 110 career training degrees and certificates at SMC—in fields ranging from the traditional (Accounting, Early Childhood Education, Nursing) to the emerging (Sustainable Technologies, Technical Theatre, and a baccalaureate degree in Interaction Design)—offer professional preparation for students interested in directly entering the job market, transferring to a four-year school, or upgrading specific skills. SMC provides news and cultural enrichment through its NPR radio station KCRW (89.9 FM), the Broad Stage at the SMC Performing Arts Center, and lifelong learning through distinctive programs such as its Emeritus Program for older adults.