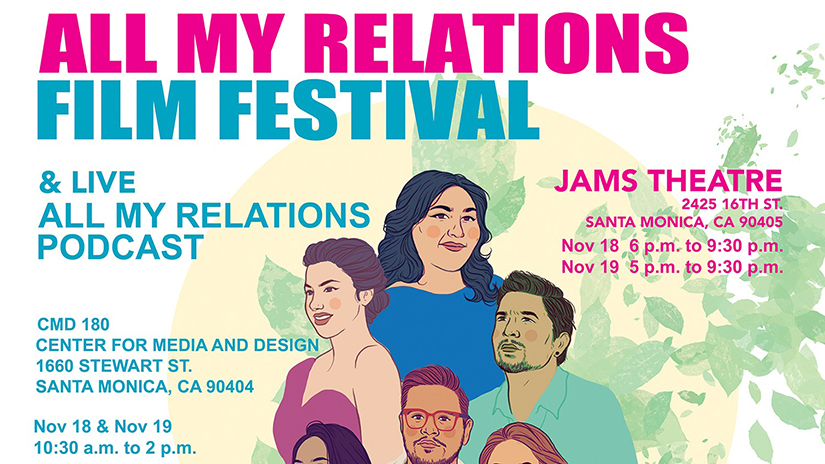 Santa Monica College (SMC) will host live sessions of the "All My Relations" podcast — hosted by Native American artist Matika Wilbur — and the first-ever "All My Relations" Film Festival on November 18 and 19. Full schedule and details at smcbarrettgallery.com.

Native American artist Matika Wilbur, SMC's artist-in-residence for 2022-2023, will lead the "All My Relations" podcasts featuring roundtable discussions with the festival's filmmakers on Friday, November 18, from 11 a.m. to 2 p.m., and Saturday, November 19, from 11 a.m. to 3 p.m. The podcast sessions will be held live in CMD Auditorium 180 at the SMC Center for Media and Design (1660 Stewart St., Santa Monica). A detailed schedule for the sessions is posted at smcbarrettgallery.com.

The "All My Relations" Film Festival will showcase eight Indigenous-centered films, each followed by a short discussion. The films will be screened Friday, November 18, starting at 6 p.m., and Saturday, November 19, starting at 5 p.m., in the new John Adams Middle School (JAMS) Performing Arts Center (2425 16th Street, Santa Monica). A detailed schedule of the sessions is posted at smcbarrettgallery.com.

Proceeds from the "All My Relations" podcast and Film Festival will be used to fund Santa Monica College’s first scholarship dedicated solely to Indigenous students.

Tickets can be purchased through SMC's Pete and Susan Barrett Art Gallery (smcbarrettgallery.com), which currently hosts the free exhibition of Wilbur's "Project 562: Changing the Way We See Native America."

About the "All My Relations" Podcast and Festival Filmmakers

"All My Relations" is a popular Native-issues podcast that explores the connections between land, creatural relatives, and one another. Launched in 2019, the podcast reaches about 60,000 people per episode. The podcasts recorded at Santa Monica College will be the second live series of "All My Relations," a follow-up to the successful live recording at the 2022 Santa Fe Indian Market.

Brit Hensel and Keli Gonzales [Cherokee Nation] teamed up for "ᎤᏕᏲᏅ (What They’ve Been Taught)." The film exploring expressions of reciprocity in the Cherokee world, brought to life through a story told by an elder and first language speaker, was created in collaboration with independent artists from the Cherokee Nation and Eastern Band of Cherokee Indians, and is part of Reciprocity Project, a co-production of Nia Tero and Upstander Project, in association with REI Co-op Studios.

Ryan RedCorn [Osage Nation] wrote and directed "Dead Bird Hearts," an Indigenous post-apocalyptic love story between an incompetent man and his dog. A filmmaker based on the Osage Indian Reservation in Pawhuska, Oklahoma, he is a co-founder of the all-Indigenous comedy troupe 1491s, the co-owner of Buffalo Nickel Creative, and director of the 2019 "Wes Studi Governor’s Awards" tribute film for the Academy of Motion Picture Arts and Sciences and a Paramount+ Take Action Film on the Keystone XL Pipeline. In 2021, he directed a documentary for PBS’s Roadtrip Nation and joined the "Reservation Dogs" writer’s room for season 2.

Jon Ayon [Mestizx (Comcáac/Pipil/Xicano/Salvadoreño)] wrote and directed "No Soy Óscar," which received the Full Frame Film Festival President’s Award. The film is about a Salvadoran-American father who films a letter to his daughter as he travels along the southern US border in search of a place that haunts him — the banks of the Rio Grande where Óscar Alberto Martínez Ramírez and his young daughter Angie Valeria drowned. Along the way, he contemplates land ownership, migration, and guilt as a Mestizo son of immigrants born on the “free” side of an arbitrary line.

Brooke Swaney [Blackfeet/Salish] wrote and directed "Daughter of a Lost Bird," the widely-acclaimed documentary that follows Kendra, an adult Native adoptee, as she reconnects with her birth family, discovers her Lummi heritage, and confronts issues of her own identity.

Shaandiin Tome [Diné], listed as one of Marie Claire’s Top 21 Creators to Watch in 2022, co-directed "Long Line of Ladies," made in association with The Pad Project. The film, which earned the Documentary Shorts Jury Award at South by Southwest® (SXSW®), tells the story of a girl and her community as they prepare for her Ihuk, the once-dormant coming of age ceremony of the Karuk tribe of Northern California. Tome's narrative projects have been selected for the Sundance Creative Producer’s Fellowship 2019, Sundance Talent Forum 2020, and Sundance/OneFifty/WarnerMedia’s Indigenous Intensive Fellowship 2020.

Matika Wilbur [Tulalip and Swinomish] will screen "Sassuma Arnaa," which follows the story of one woman revitalizing traditional Iñupiaq tattoos in the small village of Kotzebue, Alaska. Through her work, she discovers how revitalization connects to the original feminist, Sassuma Arnaa.

Recording artist Black Belt Eagle Scout [Swinomish/Iñupiaq] will provide live scoring for the "All My Relations" recordings. He was declared a favorite new musician of 2018 by NPR Music, Stereogum, and Paste. Black Belt’s debut album, "Mother of My Children," was also named as a Best Rock Album of 2018 by Pitchfork.

More information about the "All My Relations" podcast sessions and film festival screenings can be found at smcbarrettgallery.com.