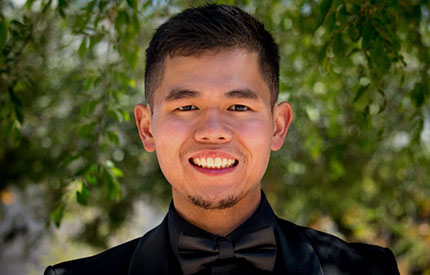 Singapore-born Ryan Ang, student speaker for SMC’s 88th Commencement, has first-hand experience with the downs and ups of life. When he was a teen, his father went bankrupt. “Creditors came to our house and seized everything for sale,” said Ryan, “and I remember thinking that I was about to become homeless, myself.” At 16, he was forced to leave school and go to work to help support his family. Ryan served his compulsory term in Singapore’s National Service, where “they put us out on an island, and we all perspired and toiled together. It taught me how to work and get along with people from all walks of life.“ He then moved to Canada, completed high school, and arrived at SMC with plans “to learn screenwriting,” he said. “But I found my passion in serving the homeless through the church — they’re just human beings like all the rest of us — and women’s empowerment means a lot to me, too. I realized that being involved in policymaking is really important, so I changed my major to political science and philosophy.”

At SMC, Ryan worked to develop his skills in public speaking, as well as listening to the concerns of others. He involved himself in student politics and government through the Associated Students, first as Commissioner for Director of Student Advocacy, then as Student Body Secretary. “I’m interested in politics, but with a focus on policy,” he said. “I like the idea of working behind the scenes.” Ryan also joined SMC’s chapter of Phi Theta Kappa, the largest international honor society of two-year colleges. With a 4.0 grade point average, he was welcomed as a member, but his involvement quickly expanded. He started as Commissioner of Fellowship, then became Secretary, and is now Executive Vice President of the organization. Acceptance letters from schools ranging from Columbia University to UC Berkeley are starting to arrive, so Ryan will be making his choice soon on where he wants to continue his studies. He plans to major in political science, but also wants to incorporate further studies in philosophy and economics into his educational future.

Ryan’s advice to current and future students? “Stop worrying about the future,” he said, “and start living.” Ryan is graduating from Santa Monica College with an Associate in Arts for Transfer in Political Science