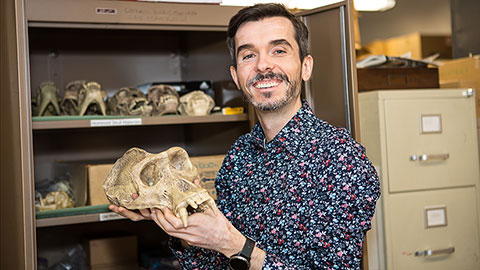 Ciarán Brewster came to the U.S. from Ireland at 18 to attend Pennsylvania’s Mercyhurst University, and discovered his passion for physical anthropology, particularly forensic anthropology.

“I was always interested in science,” he says. “Growing up, I would ask my parents to buy me atlases, fact books, and The Guinness Book of World Records.” He planned to study forensic sciences by majoring in chemistry or biology.

But during college orientation, he met an anthropology major studying forensic anthropology. “He told me about how he got to assist in crime-scene recoveries, working with skeletal remains, trying to figure out who a person was and how he or she died.”

So, Ciarán enrolled in an anthropology course and “fell in love right from the beginning.”

Today, he shares that passion with students as an anthropology professor in SMC’s Earth Sciences Department.

Dee Cappell was a liberal arts major when she “accidentally” enrolled in one of Ciarán’s courses. “I recognized on that first day,” she says, “that Dr. Brewster was a teacher who would influence my life.” She switched majors. “I discovered a field of study that is everything I’ve ever loved,” she says. “I just didn’t know it was called anthropology.”

As a vegan, Dee was also grateful that physical anthropology fulfills the same science requirement as biology — “but without the dissection of animals.”

Anthropology major Marissa Batchelor, also the secretary of SMC’s Anthropology Club, says that Ciarán “really cares about students’ wellbeing and success.” He even encouraged her to tutor fellow students — which has put her on the path to becoming a professor. “I always knew I wanted to be an anthropologist, but didn’t discover my passion for teaching until I became a tutor,” she says.

Ciarán credits the TV series “Bones” for increasing the profile of forensic anthropology. “The thing that I love about that show is you have a positive portrayal of a strong female character — something we don’t often see in fictional portrayals of science,” he says.

His classes include the experience of examining crime scenes, without the need for real-life tragedy. “We do a mock crime-scene recovery,” he says. Students figure out to “how to cover the crime scene — and, back in the lab, analyze the evidence to deduce how to identify this person and the means of death,” Ciarán explains. The students write up their forensic reports, and present their findings in class.
Ciarán notes that the skills he teaches are inclusive. “Working in a team, writing reports, giving presentations, conducting independent research — those are all skills that transfer to other professional disciplines.”

To provide some real-world experience, Ciarán takes students to visit the Los Angeles County Department of Medical Examiner-Coroner. “Students get to see how a coroner’s office works,” he says. “They also get to observe autopsies and tour the crypt where the bodies are kept.”

He also takes students on field trips offered through SMC’s Anthropology Club, including visits to the San Diego Zoo to study the primates. “Every semester I take students there,” Ciarán says. “In my opinion, it’s the best zoo in the world, and I joke that it’s my happy place.”

Ciarán’s extensive commitment to student success includes establishing tutors at SMC’s Science Learning Resource Center and the STEM Lab. He has also worked on grants, including one for $2.5 million from the National Science Foundation to enhance SMC’s commitment to equity and inclusiveness in STEM education, a project he helps lead with Associate Dean of Student Equity and STEM Programs Melanie Bocanegra and SMC Director of Academic Affairs Initiatives Edna Chavarry.