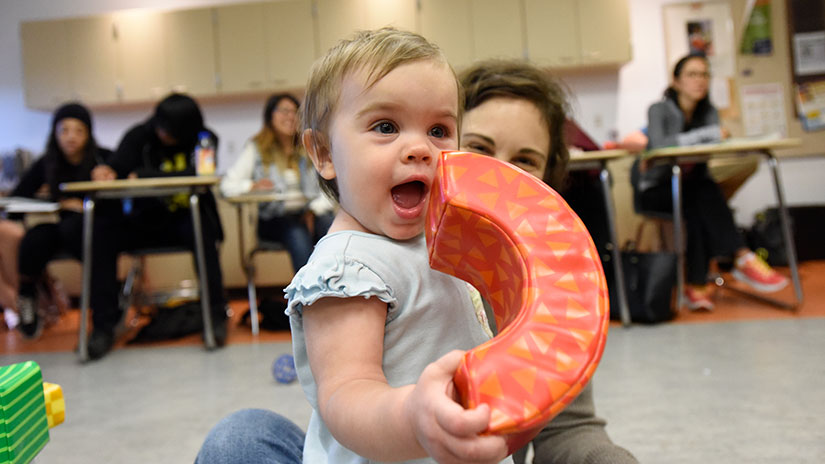 SMC’s Early Childhood and Education program builds on collaborations with community partners, through coursework, fieldwork, and professional development. The new Santa Monica Early Childhood Lab School, to be operated by Growing Place, will serve the unique needs of Santa Monica families and workforce.

“This is such a positive step forward, for our students, for the Santa Monica community, and for the children who will come to this Center,” said Laura Manson, Early Childhood Education Department Chair at SMC. “We have a real opportunity to be innovative together – to offer students the chance to be in a fully-operating childcare facility while receiving instruction, and for parents and children to benefit from the most current, scientific practices in the field.”

The Early Childhood Lab School – to be built on the corner of 4th Street and Civic Center Drive in Santa Monica – is slated for a 2019 opening. It will function as a childcare center for up to 110 children, and as a setting where SMC students preparing to become teachers in the early childhood development field will get practical experience and explore new approaches in working with pre-kindergarten children, including infants. Santa Monica residents and employees will have priority consideration for available spaces in the center; the goal of the City and the College is that a minimum of 30 percent of the enrollment is reserved for Santa Monica residents and a minimum of 15 percent for families in the low-income bracket.

“This collaboration is going to bring high quality early learning to our children and their families, and train the next generation of preschool teachers,” said Mayor Ted Winterer. “The lab school approach will help to address one of the critical concerns identified by our Well-being Index: better preparing our youth for kindergarten and helping to close the achievement gap. Growing Place is a great fit for this project and their involvement will help to make Santa Monica a place where everyone, no matter their background, can learn and thrive.”

Growing Place was selected after a Request for Proposal (RFP) process approved by both SMC and City of Santa Monica staff. An operator was selected ahead of the opening to allow for thorough planning of a model that is unique and innovative at both the state and national level.

“This is a real opportunity for Santa Monica to spotlight high-quality early education and its benefits to our society,” said Pauline McPeake, Executive Director of Growing Place. “Growing Place is guided by a strong image of the child and a belief in the role of education in constructing a better world. This partnership underscores SMC’s commitment to the development of cutting-edge practices and research.” McPeake added that the collaboration would allow both institutions to combine resources and reach a much broader audience.

The earliest discussions by the Santa Monica City Council about the construction of a childcare center in the civic center area go as far back as 1989; the idea gained momentum after 2001 when the Civic Center Working Group identified the provision of a child development facility as a priority based on a resident survey. In 2004, the City Council identified the benefits of incorporating SMC’s proposed lab school into the civic center project. Formal approval of the plan occurred in 2012, as the SMC Board of Trustees and the City Council approved a proposed agreement between the two agencies, which would allow for the construction of the Santa Monica Early Childhood Lab School within the Civic Auditorium campus. The RAND Corporation committed one-time funds via their Development Agreement with the City of Santa Monica, which will assist with program startup and tuition subsidies for low-income people.

The Santa Monica Early Childhood Lab School thus fulfills the City of Santa Monica’s Civic Center Specific Plan, which set forth a new vision for the Civic Center, and included the provision of quality childcare with priority given to residents and employees of the area. It is also part of the City’s Cradle to Career initiative and its strategic goal to invest in projects that help everyone in the community Learn + Thrive.

The design of the 20,000 square foot building, which is projected to cost roughly $13.2 million, is by Carde Ten Architects. The project is funded partially by SMC’s 2004 voter-approved bond Measure S, and general fund monies from the City of Santa Monica.

The facility is planned as an innovative “lab school” for SMC’s rigorous Early Childhood Education program – also known as the SMC Teacher Academy – where students will observe and document child development as they put their knowledge into practice, helping families availing of the Early Childhood Lab School’s services promote their children’s success and well-being.

SMC offers associate degrees and certificates in Early Childhood Education-Career and Early Intervention Assistant which prepare students to work with young children who have disabilities and other special needs as well as those at risk of developmental delays and challenges. The college also offers a department certificate in ECE, which equips students to obtain an Associate Teacher permit; and an Associate in Science for Transfer degree in ECE which satisfies lower-division requirements for a four-year ECE degree at a California State University (CSU) campus, and gives students the opportunity to get priority admission into many CSU campuses.

In addition to providing students a range of career and education options – including preparing for the state’s Children’s Center Permit, fulfillment of post-certificate professional development, and completion of advanced California Career Ladder courses – the SMC Teacher Academy prepares students for transfer to the University of California. Santa Monica College holds an unbroken 26-year record as California’s number one transfer institution to the UC.