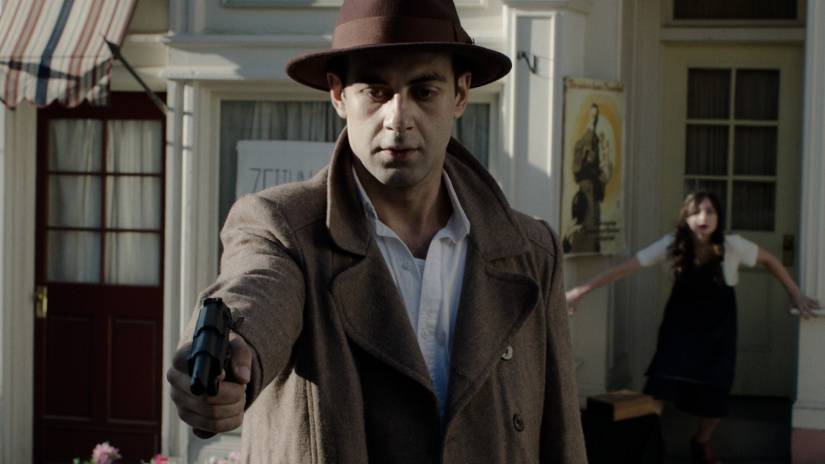 Ara Woland as Soghomon Tehlirian and Carrie Finklea (background) as Lotte in “The Attempt”, a Santa Monica College student film directed by Daniel Despart that has won Best Student Film at the 2020 Vienna Independent Film Festival.

Based on the true story of Soghomon Tehlirian

VIFF’S programming director, Elena Ringo, said about the winning film: “’The Attempt’ impressed the audience and judges with its artistic qualities and important subject matter. The current clashes in Nagorno-Karabakh made people recollect the Armenian Genocide, thus increasing interest in the film.”

“The Attempt” is set in 1921 post-World War I Berlin and it is based on a true story. It follows Soghomon Tehlirian, a young man who is given the mission to assassinate the chief orchestrator of the Armenian Genocide. During the attempt, Soghomon realizes that killing another man is not easy and contemplates starting a new life with the woman he loves.

"It’s a great honor to have won Best Student Film at VIFF,” said Daniel Despart, “and it is a great testament to the artistry and professionalism of our SMC crew, since we had to recreate 1921 Berlin in Los Angeles! My intention with this film was to inspire others to look further into the true story behind Soghomon Tehlirian and in turn, the Armenian Genocide as a whole. We must never forget our past, and in this modern age of wholesale disinformation and double-speak, this has never been more pertinent."

“’The Attempt’ takes a Dostoyevskian approach in exploring a young man’s moral conflict when he is given the mission to assassinate another human being,” said SMC Film Professor Salvador Carrasco, who heads the film production program. “Conflicts have recently arisen in the Caucasus that make the historical ghosts of this story ever so present. Such is the power of cinema: films can take on a broader dimension depending on what is going on at a given time in the world.”

Ara Woland, a renowned professional actor who plays Tehlirian and also co-produced the film, said, “I am thrilled that ‘The Attempt’ is getting the recognition it deserves because it is timely and more relevant today than ever. The events depicted in the film did not put an end to the Armenian Genocide. Armenians today, at this very moment, are at war, fighting for the survival of the nation and its 4,000 year old history. The world, however, is turning a blind eye just as it did during the Armenian Genocide, during the Holocaust, and other ethnic cleansings. The spirit of Soghomon Tehlirian is the perfect example of the perseverance of the Armenian nation. We will fight to preserve our existence, our culture and our sacred lands. And hopefully the world will wake up and fight terrorism and aggression.”

SMC offers an Associate in Science degree and Certificate of Achievement in Film Production. To learn more, visit the SMC Film Production website or email Carrasco_Salvador@smc.edu. The film program—as well as the films that come out of it— is on YouTube as the “Santa Monica College Film Program” channel.

VIFF is a nonprofit organization dedicated to the discovery and development of independent artists and audiences. VIFF seeks to discover, support, and inspire independent film and theater artists from around the world, and to introduce audiences to their new work. For more information, visit vienna-film-festival.com.