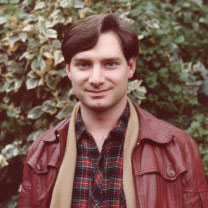 In his years as a full-time faculty member of the Music Department, David Goodman has earned a reputation as one of SMC's outstanding classroom teachers and has mentored hundreds of students who have gone on to pursue successful careers in music. An accomplished composer and pianist who is conversant in a multitude of musical styles and genres, he has written works for orchestra, chorus, solo voice, jazz ensemble, brass choir, electronic media, theater and film and has received awards from The American Academy and Institute of Arts and Letters, ASCAP, the National Orchestral Association, and Who's Who in America.

In 1975 he received a Bachelor of Music degree from Oberlin College where he studied composition and piano and went on to earn his M.A. and Ph.D. degrees at the University of California, Berkeley, where he studied composition and conducting. He has taught in the music departments at UC Berkeley, Pomona College, and UCLA, and in 1997 was appointed to the faculty of Santa Monica College as a Professor of Theory, Composition, and Music Technology. In addition to his career as a teacher, he has worked in the music and film industry as a composer, conductor, session player, orchestrator, arranger, and vocal coach. In 2001 he was awarded the first SMC Ilona Katz Chair of Excellence and from 2002 to 2006 was the Music Composition Panelist and chamber music coach for the National Foundation for Advancement in the Arts (now called NewArts).

His Canto de Esperanza has received critical acclaim throughout the United States, Europe, and Latin America and is included on GMCLA's Diversity CD. His scores for the PBS documentaries Reina de la selva and Darkness Into Light have been broadcast nationally and in Europe and received awards at the Houston International Film Festival. Among his other notable compositions are his Piano Quartet, commissioned by Pacific Serenades and Corsair Overture for Orchestra and Chorus, composed in commemoration of the 75th anniversary of Santa Monica College.

As a pianist, he has been Musical Director for The Fantasticks, The Seven Deadly Sins, Side By Side By Sondheim, Oswego (in collaboration with Man of La Mancha lyricist Joe Darian) and others. In the arena of contemporary music, he has performed the demanding piano parts in Schoenberg's Pierrot Lunaire, Donald Martino's Notturno, George Antheil's Ballet Méchanique, and Roger Sessions' Concertino among numerous other contemporary works. He continues to funnel his creative energies into both composing and playing a wide range of piano repertoire from classical to jazz.

In August of 2007, he was awarded his second Ilona Katz Chair of Excellence from the Santa Monica College Foundation to compose a work for chorus and orchestra that has as its central theme the issue of global and human responsibility. The culmination of this project, Prayers for the Planet, received its world premiere in June of 2011 by the SMC Concert Chorale and Los Angeles Concert Orchestra under the direction of Dr. James Smith. In 2016 Dr. Goodman received his second commission from Pacific Serenades for which he composed a five-movement work for flute and string quartet titled "Walking Music". It was premiered in June of that year by professional musicians from the Pacific Serenades Consortium at UCLA and in a private performance in Pacific Palisades.

To listen to some of David Goodman's music please click on the links below.