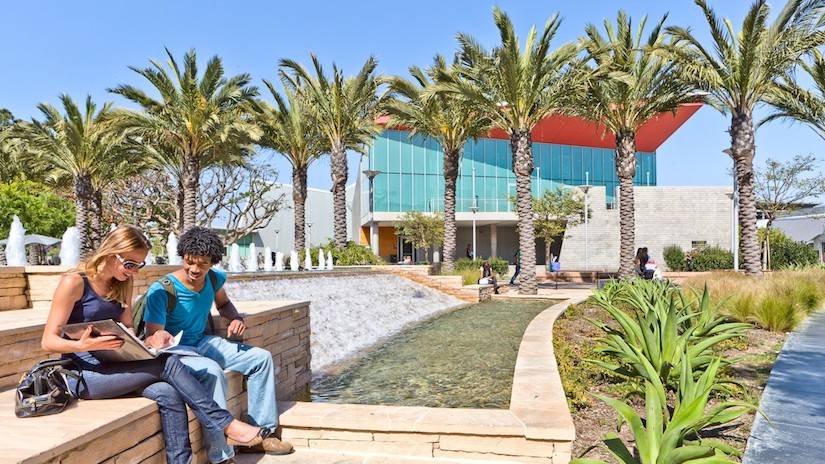 • Carol Davis, adjunct English professor, is the new poetry editor for the Los-Angeles based Jewish Journal. The newspaper has a weekly circulation of 50,000. Davis has also been awarded a Barbara Deming Memorial Fund/Money for Women grant – this is the oldest feminist granting agency in existence. She will use the award to travel to Germany to work on a new chapter during the winter intersession.

• Andrea Sanderson, adjunct music professor and SMC’s concertmaster was featured on a CBS Thursday Night Football Spot with actor Don Cheadle and a few members of the SMC Symphony.

• Good Chemistry! The American Chemical Society (ACS) recently awarded SMC’s Chemistry Club the “Commendable Award" for its activities during the 2013-2014 academic year. The ACS is the world’s largest scientific society with over 161,000 members and is one of the leading authorities on scientific information. As a student chapter of the ACS, the Chemistry Club’s mission is to stimulate an interest in chemistry through community outreach and club activities, and provide professional development via speakers and workshops.

• Debra Knox, Administrative Assistant in HR, helped paint truss lumber with Habitat for Humanity in November 2014. There are 12 homes being built, in Riverside!

• “Pyrometrics – A Retrospective in Ceramics,” at the Santa Monica College Pete & Susan Barrett Art Gallery was Ceramics Instructor Franklyn Phillips’ first retrospective exhibition (1970-2014). His work represents his growing involvement with the mysteries of meditation, metamorphosis, and nature’s hidden drama revealed through the primary elements of earth, water, fire, and atmosphere.

• The SMC Rotaract Business Club hosted the winners of ABC’s “Shark tank” on October 7, 2014. Marc Newburger and Jeffrey Simon, the inventors of Dropstop car wedge which is sold at Walmart, came to speak to students about entrepreneurship, and inspired them with their stories of hard work and dream chasing.

• English Professor David Burak was invited to speak at a forum “Gender and Activism at Cornell in the 1960s” sponsored by the Feminist, Gender, and Sexuality Studies Program at Cornell University (his alma mater) on November 1, 2014.

• Time to add that “Dr.”! Susan Finley, adjunct professor in the Counseling Department is proud to share her accomplishment of earning a Doctorate in Organizational Leadership from Pepperdine University in July 2014. Professor (and Dr.) Finley encourages her students to take an active role on campus, get involved, and never be too serious to have fun in their college experience.

• Dr. Kimberly James, professor of English, recently founded a non-profit called Books&Wanderlust. The mission is to enrich the lives of underserved populations by providing opportunities to explore the world, by providing scholarships for readers, writers and travelers in Los Angeles County and the Greater Cleveland area – and that includes SMC students. Scholarships can be used for textbooks, attending writing conferences, or study abroad programs. Visit www.booksandwanderlust.com for more information.

• Taking SMC’s message of global citizenship all the way to China – dance department faculty Judith Douglas, Raquel Ramirez, Sri Susilowati, Bernard Ceballos and Laura Canellias and SMC’s “Global Motion” dance company including 29 students were invited to Beijing, China over the summer of 2014 to perform at the “International Folklore Arts Festival.” They performed at theatres in Beijing with dance companies from other countries. Aztec, Indonesian, Mexican, Tahitian, Mexican Folklorico and Latin American Salsa were among their repertoire.

• Jeopardy, pizza and financial literacy? That’s what business professors Pat Halliday and Jenny Resnick did for SMC veteran students on September 30. Students played jeopardy to test their financial literacy and learned how to prepare a cash budget, courtesy of the SMC Veterans' Resource Center. And there was pizza for lunch, of course.

• History professor Jaime Cruz realized how travel makes history come alive – he spent two weeks traveling to Copa Cabana in Brazil, Santiago, Chile; Machu Picchu and the Amazon in Puerto Maldonado in Peru. The trip contributed to his knowledge of the Latin American history courses he has taught.