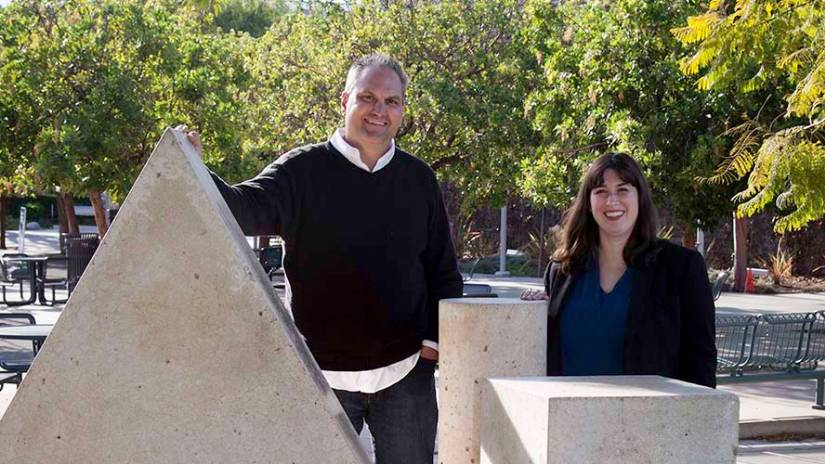 In December 2018, Santa Monica College received a prestigious $100,000 grant from the National Endowment for the Humanities (NEH) for an art history project entitled “Mapping and Preserving the Hidden Histories of Santa Monica”. SMC Art History professors Briana Simmons and Walter Meyer were behind this groundbreaking digital humanities project. The announcement was made in a Dec. 12 NEH press release; SMC’s grant was the largest award granted in Southern California.

Here’s what the three-year curriculum development project will involve: the creation of a digital database of art history narratives of a region including Santa Monica, Venice, and Malibu—but with a special emphasis on telling stories not often told, or heard. Walter and Briana will lead SMC students in developing the database, researching locations like the Inkwell (a Santa Monica beach where SMC student Nick Gabaldón and others helped challenge Jim Crow racism and open public beaches for all). The digital research and archiving project will align with 8 art history courses—SMC’s art history program serves around 2,000 art and non-art majors each semester—and the database will be made public (it builds on a project Walter began with funding from the SMC Foundation).

Walter and Briana will work with local community organizations such as the City of Santa Monica, the Santa Monica History Museum, the Santa Monica Conservancy, and the Social and Public Art Resource Center (SPARC) founded by artist/scholar Judith Baca, to identify the best locations for research. The project will be a part of a series of SMC’s Art History courses including Latin American Art History, Art Appreciation: Introduction to Global Visual Culture, Arts of Asia, and Introduction to African Art History.

While they are deep in the “planning phase” of this truly groundbreaking project, SMC in Focus caught up with Walter and Briana to learn more:

What was the journey or the “spark” that led you to apply for the NEH grant?

Walter: Briana was the spark. Her husband is involved with digital humanities, and she knows my passion for the same—and so she sent me an email about this grant for community colleges. We thought, ‘Should we apply?’ not thinking we would get it. Then we reached out to [Laurie McQuay-Peninger, SMC’s Associate Dean of Grants]. She said we should apply, and we ended up coming in over the summer for several weeks, to work on the grant application.

Briana: Just finishing up graduate school a year and a half ago, and realizing that Santa Monica College is such a special place, and there is a potential for these larger projects—and seeing what Walter had done so far with his classes—I thought, we could really take this to the next level.

So, what was your reaction when you found out that you’d not only gotten the NEH grant, but the largest award in Southern California?

Briana: I got a phone call from the NEH and then, I was like, I have to go find Walter!

Walter: I think we hugged and high-fived, right? And also, there was a little bit of disbelief. Then we had to keep it quiet [for a couple days] and . . . that was hard.

Tell us about the project, what is going to be involved.

Briana: The first goal is to discover the hidden histories of Santa Monica—what we don’t see represented in the predominantly white Hollywood narrative is the history that’s obscured from the general media. When you imagine Santa Monica . . . beaches, wealthy mansions, right? There’s so much more here. The way we’re going to find the hidden histories is by involving Santa Monica College students to do research, to make connections with other historical organizations, and then take that research to a public platform, on the internet, where, all of these interesting facts, artwork, stories and personal narratives that have been hidden are now available for anyone to use. Walter and I are in the planning stages, talking with community partners, to see about having students research and connect with them . . . .and then, in Fall 2019, we are going to implement this in our classes. So, actually working with students, instructing them in methodology and best practices, how to do research, talk about what are the interesting questions that come up, what are the gaps in the narrative, and so on. We are going to be teaching students not only how to do research but also how to put the research in this accessible online platform of Omeka. Then, we’re going to open that up to other Art History instructors who might want to try this kind of pedagogy in their classes.

At what point does the research become accessible to the general public?

Walter: Almost instantaneously. You can go and see the pilot projects we’ve done in my classes. The real key is in how we use our current course objectives and outlines and meet them through these unique, student-based projects. They own this. They’re generating things that are real world as opposed to just looking at art in museums. I want to do a couple quick shout-outs: I can’t emphasize how important amazing colleagues are, just Briana’s presence in our department has been so positive and helpful. And the SMC Foundation funded me with two Chair of Excellence awards in order to engage in digital humanities and new pedagogy. Without those awards, we wouldn’t have had a project to propose.

How groundbreaking is this project in the field of art history?

Walter: For community colleges, this is huge. I’m so grateful to work at SMC, and to have support—the Academic Senate Professional Development Fund (and some Foundation funds) have allowed me to go to the College Art Association conference each year. That’s where I’ve been really able to develop this notion—seeing how big digital humanities has become, nationally and internationally. And, in art history, it’s rather new. At these conferences, I have seen several presentations about using databases and this technology to teach. It’s always at four-year schools. I kept thinking, there’s got to be a way for us to bring that to our students, these are real-world skills used in the job force…other community colleges are doing humanities projects. But in terms of the digital humanities, I see the University of California and Cal State systems with full-on programs.

Briana: A lot of people are, like, what is ‘digital humanities’? Really it’s a way of coming to questions, because once you organize your research in a database, you’re able to see things that you wouldn’t have seen before. Many four-year schools now are interested in what’s called critical digital humanities—using digital humanities to question dominant narratives, dominant power structures. I feel that at a community college—where our students are so diverse—this is a natural fit as a project, as a way of getting at questions.

Walter: To Briana’s point about different histories – there’s a different kind of thinking which is digital. Analog thinking is linear. You start at page 1 and end up at page 30. But when people talk about digital humanities, it’s also about creating a knowledge base that is not close-ended. We will document sites (and we already have) but that’s not the end story. The narrative has the potential to evolve and we’re cataloguing more like data points as opposed to telling you the story. It just hit me when I was thinking about it—there’s this [notion of] who’s important in Santa Monica or in LA, right? Over the last 100 years, there are these white men . . . but what about before 1900? This area was originally populated by indigenous peoples and the city founders included those of African, Latinx and indigenous descent which continues to this day. So the actual history of this region is not “white” but that is the narrative we privilege. Once you get to a non-linear [history], then you have these open-ended ways of discussing things and reprioritizing them even in our history curriculum.

Tell us a little more about Omeka.

Walter: Right now, Omeka is not a great-looking platform. It’s a simple way of making the information we gather go quickly public. Everything you see there are from SMC students—some are really great, some clunky. Right now it’s a work in progress. One part of the NEH grant will be to actually hire students to help us edit, and go a little deeper. Because you only scratch the surface within a 16-week class. It’s important for students to see the ownership . . . the end product of something they produced because they took this class. It’s also a real world skill—they can go into the workforce and say, I’ve done work with a database (even if it’s really basic).

What would you say is the greatest benefit to students who will work on this project?

Walter: It’s what Briana said . . . students owning the telling of their stories and histories. And the choice to find and uncover [more]. Something they do in the classroom ends up as an actual item in the real world (or “real virtual world”!); they can point to it and say, ‘Hey, I worked on that.’ Also, the skill set of thinking and writing of a narrative, which, really, you don’t think about until graduate school or as a senior project. So, they’re getting to do this as part of a course in a lower division transfer class. I think that’s what is awesome!

Briana: Just going off what Walter said . . . this idea that history can change. It does change. It is changing depending on who’s telling it. So the students having their voices heard, as telling part of this history, and other students learning from it. I love the idea of it. This is just going to get bigger and bigger, with more connections with the community—this is what SMC is all about. It’s about opening your worldview but also bringing part of your story into it.