From Jakarta, with Heart 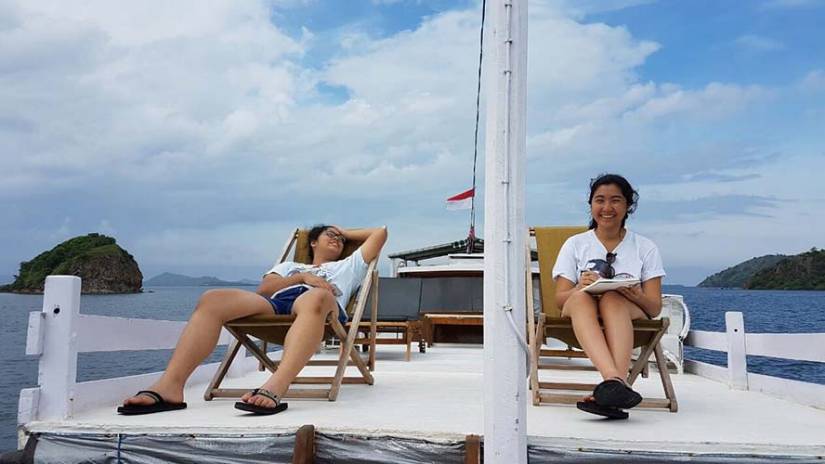 What’s in a name? Ask Eleonora Stella Oei, who’s been called “Stella” all her life. It’s a Latin word that means “star,” and she’s living up to the promise of her name.

After just one year as an animation major at Santa Monica College, Stella transferred to CalArts in Fall 2017 for a Bachelor of Fine Arts degree in Character Animation. For her first-year project, she created an animated video, “Side Effects,” a touching, short piece focused on a man who takes care of others, but forgets to care for himself.

It became an official selection at six international film festivals—including the Balinale International Film Festival 2018, UK CineFest 2018, and Tofuzi 2018—and a viral sensation.

“Side Effects” has been viewed more than 130,000 times on Stella’s YouTube channel; and on her Vimeo feed, another 88,000. And that doesn’t begin to account for her Instagram feed (@stella_Stelli), plus the hundreds of thousands who have watched it by way of re-posts from strangers and friends on their own social media pages.

Stella says it was inspired by a feeling she sometimes experiences. “It’s that moment when you feel a little bit down but you don’t want other people to carry the burden for you, especially if you’re someone who also takes care of others. I needed to create something out of that feeling, and apparently it resonated with a lot of people.”

The downside of “imitation as the highest form of flattery” was that someone saw “Side Effects,” shortened, sped it up, re-edited it, and changed the music, then ran it as his own.

“It felt really weird at first, and I was upset,” Stella says, “but at the end of the day, I’m just happy it reached so many people who felt its impact. I’ve closed the chapter on this and it’s time to move on and create new things.”

And that is the attitude that defines Stella Oei.

Her favorite teacher at SMC was Jim Keeshen, who describes Stella as a unique student, with a quiet, but determined aura, masking a powerful person. “She’s the student all teachers want: she does the work, asks the right questions, is on time with her attendance and assignments. One can see her grow as she absorbs the lessons.”

Stella took Jim’s storytelling and animation classes, and shared with him her aspiration to work in animation, storyboards or visual development. He said that to his amazement, “Her sketchbook was brimming with professional level drawings of people, animals, landscapes, in pen and ink, markers, pencils, color washes, etc.  It was evident that she had extensive art training.”

Actually, she didn’t. In Jakarta, Indonesia, she had only taken a drawing class in kindergarten and an oil painting class in middle school, but she had been drawing on and off since she was a child.

So, while helping her older sister research colleges, Stella began considering where she might go in the future. “I remember during an English language speaking test, I was asked what I want to do, and I blurted out of nowhere that I wanted to work for Disney or Pixar. I loved their films and thought maybe if I learn more about them, about what it takes to be an animator, I could focus my energy on that and try to do my best.”

She researched animation schools, and decided that if she were to study in this field, she should go to the best school. For her that was CalArts, so that became her goal.

But in Indonesia there were no nude life or figure drawing classes, which Stella needed to build a strong portfolio. Further research revealed that SMC not only offered those classes but was a leading transfer school, with a path to CalArts.

In addition to enrolling in life and figure classes, Stella joined SMC’s twice-a-week figure drawing club. For even more practice, she found a free figure drawing class at Otis College of Art and Design that attracted industry professionals, and carpooled with fellow students to attend.

Stella, who will be 21 in February, says SMC gave her the opportunity to lay down a foundation for her art, ethics and life. “I attended SMC right after high school. It was my first time living alone, and on top of that, I had to learn how to take care of myself, juggle classes and adapt to a new society with a different language. I knew I needed to take advantage of everything SMC had to offer.”

Her determination, focus, and her portfolio—along with Jim Keeshen’s letter of recommendation—got her into CalArts on her first try. And because of Stella’s success, her parents have now sent her younger sister to SMC, where she’s studying business.

After completing her first year at CalArts, last summer Stella was awarded a paid internship at Anima Studios in Mexico City, where she spent five weeks learning the trade from multiple angles in an intimate, professional working environment. It was exactly what she was hoping for, as she considers her future in this field.

Jim Keeshen believes that “Stella has all the ingredients to be a big success in the entertainment business, all she needs now is just a little bit of luck.”

Stella notes that animation has many specializations, and she said, “Lately, instead of just animating and moving the character, I’m more interested in story and creating the character, what they do, how to define this character, more of that stage of film making.”

She also believes that art can change the world and peoples’ minds. “Growing up watching movies really shaped me and taught me empathy. I want to make work that speaks to me and to other people, that is positive and inspiring. As long as I can work in animation, I know I’ll be happy.”