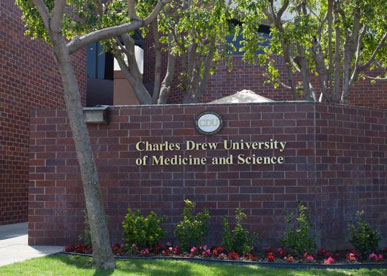 About Charles R. Drew University of Medicine and Science

Charles R. Drew University of Medicine and Science is a private, non-profit, historically black university and a minority-serving institution located in Willowbrook, unincorporated Los Angeles County, California, United States. It was founded in 1966 in response to inadequate medical facilities within the Watts region of Los Angeles, California, USA. Later, the institution became a university and changed its name in order to reflect its new academic role. The university is named in honor of Dr. Charles R. Drew. It was associated with the former-Martin Luther King Jr./Charles R. Drew Medical Center from 1972 to 2006, and sometimes referred to as King-Drew University.

The university is a member-school of the Thurgood Marshall College Fund.