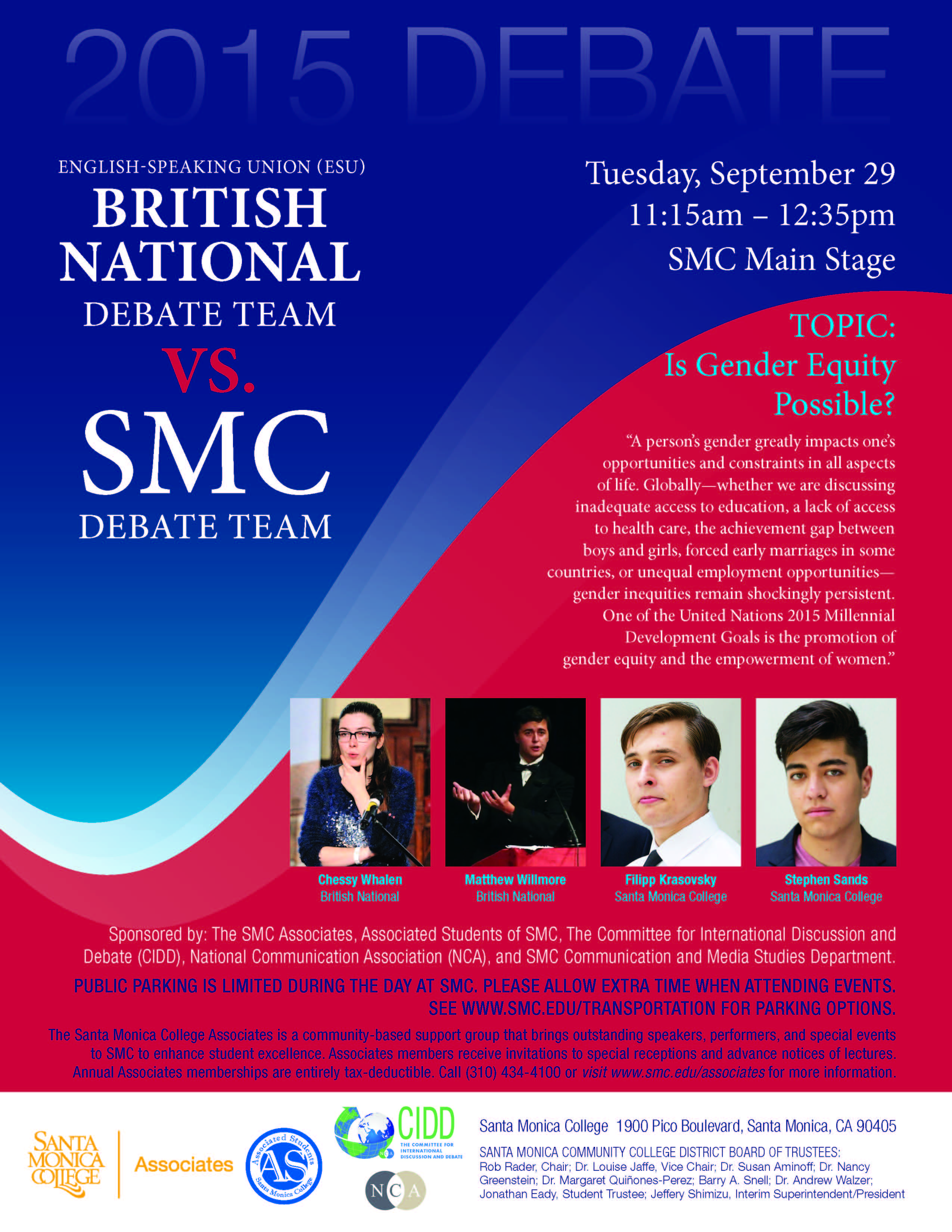 “Is Gender Equity Possible?” will be the topic of a debate at Santa Monica College between the English-Speaking Union’s 2015 British National Debate Team and the SMC Debate Team.

The debate will be held Sept. 29 at 11:15 a.m. in the Main Stage at the SMC Theatre Arts Complex, located at 1900 Pico Blvd., Santa Monica. The event is FREE and open to the public. Seating is strictly on a first-arrival basis.

“It is a great honor for SMC to host the British Debate team, and to be part of this long tradition of international debate and discussion,” said SMC Communication Professor Nate Brown. “I am confident that SMC – even as a community college – will eventually be a regular competitor at international tournaments, and this event with the British debaters is just the first. We are proud to be SMC, and proud to face such accomplished debaters.”

British National Debate Team members Chessy Whalen and Matthew Willmore will argue against SMC Debate Team members Filipp Krasovsky and Stephen Sands in the parliamentary-style debate, which pits opponents two against two. Each speaker has a specific amount of time to speak, but can be interrupted by the opposing team. Audience members will be able to indicate their preferences throughout the debate – as well as vote for a team – using

PollEverywhere.com on a variety of their own electronic devices.

Whalen, who just completed her 3-year BA in History at Balliol College Oxford, convened the Oxford Inter-Varsity and Oxford Women’s debating competitions, was an active member of the Oxford Union Debating Society, and was a quarter finalist at the 2015 European Championships in Vienna. She recently returned from a university-sponsored research trip in Mexico, and will start work next spring at a strategy consultancy in London.

Willmore earned his LLM in Human Rights at the University of Edinburgh and works extensively as a debating coach and judge for the ESU. He won the 2014 European Championships and reached the out-rounds of numerous earlier competitions, including the semifinals of the 2013 John Smith Memorial Mace. He has also been Chief Adjudicator at numerous competitions, and taught at universities in the UK, France, and the United States.

Krasovsky is in his second year at Santa Monica College. The son of Russian immigrants who escapedtyle="color: fuchsia;"&gt; Russia after the collapse of the Soviet Union, he placed 11th in California for congressional debate, and has won 35 other awards in public speaking – including parliamentary debate, duo oral interpretation, impromptu, extemporaneous, and Lincoln Douglas debate. He intends to transfer to an economics major, then attend law school.

Sands is also in his second year at SMC, majoring in business administration. He competed in speech and debate tournaments for 4 years while attending Granada Hills High School, received first place as best speaker in a competition at James Monroe High School in North Hills, and advanced to the finals at Duke University’s Duke Moot Court International Debate Competition, one of the largest high school moot court tournaments in the United States.

The British National Debate Tour – started in 1922 by the English-Speaking Union – sends a two-person team of British students to the United States each year to debate at colleges and universities across the nation. The team is sponsored by the Committee for International Discussion and Debate (CIDD) and the National Communication Association (NCA).