Beyond the Obvious: Marc Trujillo 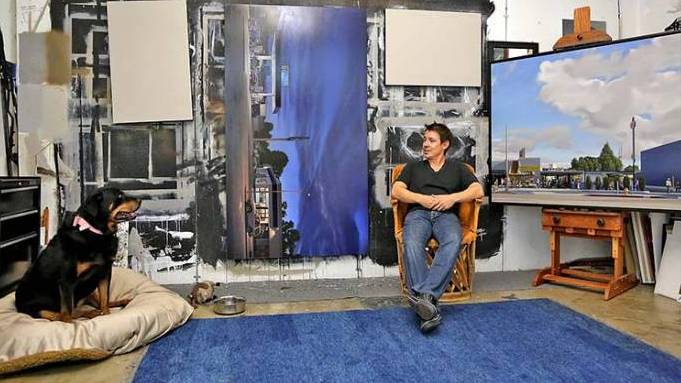 The inside of a Costco – or a KFC leg and thigh special – will never seem the same again after you’ve seen one of these subjects interpreted in Marc Trujillo’s paintings. If art talk doesn’t come naturally to you, it’s hard to pinpoint exactly what it is about the Santa Monica College art professor’s work that grabs you – except it does.

Marc’s work was recently featured on KCET’s “Artbound” twice – first as an article on the channel’s blog and then as a short documentary after audiences voted it the most popular feature that week. One of his favorite museums – the New Britain Museum of American Art in Connecticut – also acquired one of Marc’s paintings for their permanent collection (Marc’s work is also available for viewing at Hirsch & Adler in New York City).

Predictably, Marc has a lot of professional artist friends with whom he enjoys “talking shop”, but he says nothing compares to the experience of teaching at SMC.

“My students here at SMC are so diverse in every meaning of the word,” says Marc. “They're from all over the place and from all points of view…as an artist that keeps me very nimble.” Teaching was always part of his dream, says Marc, and he finds that his work in the classroom and in his studio are completely, mutually beneficial.

Marc counts Johannes Vermeer and Diego Velazquez – and the desert of New Mexico where he was born and raised – as big influences. Marc’s paintings often features places and scenes you might think banal, places he calls “North American purgatory” that we go to often and pass through without giving them a second thought or (heaven forbid) enjoying the experience of being there. In his paintings, elements like wide spaces, the intricate interplay of light and the painstaking detail – the freezer section in a grocery store, for example – all point to his influences.

When he takes his students to museums, he likes to point out to them what he calls “a genealogy of influence.” While many would agree that the American painter Edward Hopper’s work is similar to Vermeer’s, for example, Marc tells his students to go “straight to the source.”

A Guggenheim Fellow, Marc recalls being invited to speak at Maryland Institute College of Art where he had once been denied admission (he ended up at the Yale University School of Art, his top choice, where he went on to earn an MFA). He likes to tell his students that story, and how the school he wanted to go to the most – Yale – offered him the largest scholarship.

On class trips to the museum, Marc asks his students to be analytical in their responses based on discussions in class about specific composition strategies, and then bring back what they responded to in the paintings they viewed, and translate it in their own work. “I try to help the students look at the paintings as artists and not as fans,” says Marc. Like him, they do little thumbnail drawing of paintings that they like in museums and note three compositional things they liked.

“What grabs me about those places is primarily visual,” says Marc about the places he paints – which do not include any historical landmarks, a conscious choice to allow the viewer to see things without telling them how to feel about it. Marc spends weeks doing drawings and painting a “grisaille” (an acrylic painting in black-and-white) that helps him figure out what the composition should be for the painting before he starts the actual oil painting.

Marc does a lot of guided practice and demonstration and makes it a point to introduce his work to students early on.

“Demonstration is so important especially in such a diverse community,” says Marc. “That's one of the ways you address just how many languages there are in a classroom. If my students don’t get the point I’m making in English – they’ll get it when I actually do the thing.”

(All photos courtesy of Marc Trujillo; photo of Marc and his studio assistant, Ursa the Rottweiler by Eric M. Swenson)