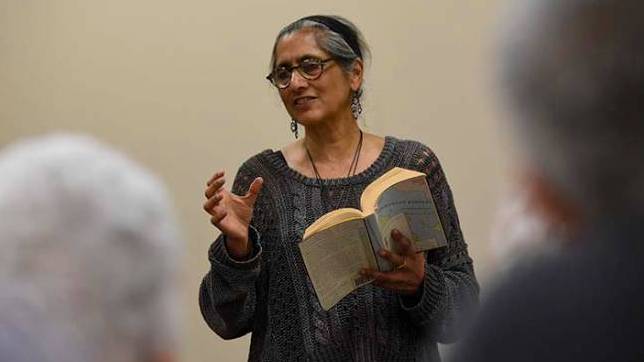 "As a native New Yorker, I have always believed that no civilian has any need to own a gun," she begins. The class is transported to the 1950s when Newman and her former husband moved to a 30-acre farm in Deering, New Hampshire, which they bought for $5,000. "Shoot first, ask questions later," her husband instructed Newman. The piece ends with her husband turning in their guns after they've moved away from the farm, the day Robert Kennedy was shot.

A student named Marcia reads about the time she walked into a house she was subletting in Venice Beach and found a former college-mate – now a nudist – blissfully cooking in the buff. Afterwards, Wali and the other students offer positive critiques. "I love the detail – and how you draw us into the scene," says Wali, a filmmaker, short story writer, and novelist. "Like telling us the woman was naked except for her red flip-flops."

Newman – a former researcher at the Library of Congress – says that the first time she wrote creatively was when she came to Emeritus, after she moved to Santa Monica in 2009. Writing stories based on her own life have given her great insights into her own life, says Newman.

Wali’s memoir-writing class is one of hundreds of free classes offered at Emeritus, a landmark program that celebrated its 40th anniversary last year. In the year ranging from summer 2015 to spring 2016, Emeritus offered 382 classes. A quick glance at the schedule of classes shows arts and crafts, computer training, T’ai Chi, French, Yiddish and Spanish literature, music appreciation, Spanish folk singing, and many more. And over 3,000 older adults benefit from classes that are held at the campus on Second Street in Santa Monica, or at other locations throughout the cities of Santa Monica and Malibu.

"Emeritus is proud to have met the unique lifelong learning needs of older adults for over 40 years," said Gita Runkle, Associate Dean of Emeritus. "And we look forward to meeting their intellectual and wellness needs for years and years to come."

It is obvious that if there is one word to describe Emeritus, it is "community."

"This class is a strongly bonded community," says Wali, of her students. "The most important thing is that we've created this safe environment where they feel like they can share their personal stories, and not just that, they become better writers. They stick to it, and the bar keeps getting raised. It's impressive!"

Margaret Ross teaches a class called "The Fix-it Class." She teaches her students how to do simple maintenance tasks – turning off gas and electricity, for example – and discusses consumer-related issues, like how to protect their credit card and bank accounts from hackers, and much more. During tax season, she taught her class about the Identity Protection (IP) Pin, an additional layer of protection offered to eligible taxpayers to prevent the misuse of their social security numbers.

"I have students tell me, 'I wish I had known about this class years ago'," says Ross, a former licensed psychotherapist and English teacher. "I myself am an older adult so this work is particularly dear to me. My students bring back photos of things they've fixed, I feel like I've done something helpful."

This distinctive lifelong learning program also enriches the community with music and arts – a 60-member Emeritus Concert Band has been putting on free concerts since 1979. The acting classes also present theater performances, and the Emeritus Art Gallery regularly showcases work from students as well as guest artists. In addition, Emeritus has two literary publications: one is called the Emeritus Chronicles and the other is called The Ongoing Moment (the latter includes works of art intermingled with the literary pieces).

"I've learned from my students the grace of aging – through how sharp they are, how willing they are to learn and engage," says Wali. "They are role models for me."

Visit www.smc.edu/AcademicAffairs/Emeritus to learn more about the Emeritus community.