The Power of Second Chances 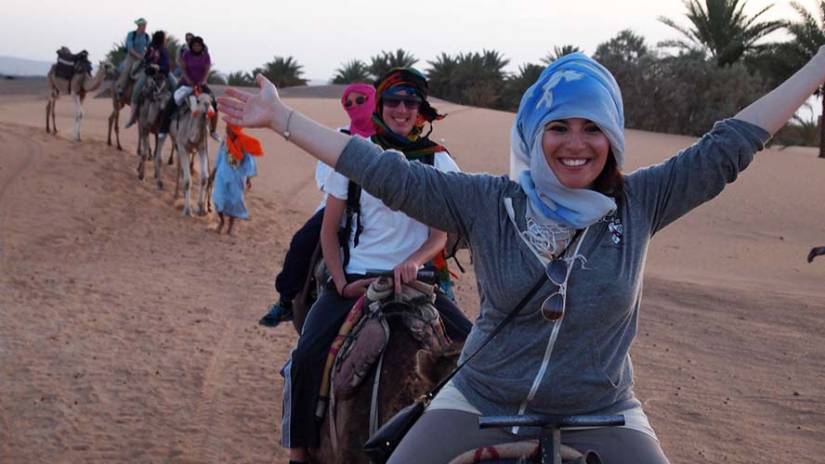 Ilona Gerbakher is living proof of the power of second chances. At 15, she was a straight F student.

"I don't think I went to class once in my freshman year," she said.

Today, she’s a PhD candidate in Islamic studies at Columbia University, with a bright future as a scholar of the Graeco-Arab translation movement and Jewish history in the medieval Middle East.

Her inspirational story illustrates, among other things, why community college is an indispensable institution.

From Odessa to Sherman Oaks

Ilona was born in Odessa, Ukraine, in the twilight of the collapsing Soviet Union. Three generations of her Jewish family emigrated to the United States in 1989 when she was only two.

“It was the typical immigrant, two-suitcase story,” she said, with a musical laugh that makes light of past hardships.

The Gerbakhers were intellectuals and professionals, but the American dream eluded them. Ilona’s grandfather had been a concert pianist in Odessa. In Los Angeles, he put his musician’s hands to work as a chiropractor. Her father had been an oral surgeon in his homeland, but in California he struggled to reestablish his credentials. It took him eight long years to pass his medical boards.

“We were reduced to absolute pennilessness,” Ilona recalled, of her early childhood living in the Fairfax district and later in Sherman Oaks. “My father worked as a cook at a mental institution. My mother worked nights as a cleaning lady at Cantor’s Deli. They did whatever they had to do. I don’t remember my mom ever not working 20 hours a day. It took a heavy toll on our family.”

In Ilona’s first week as a high school freshman, against the backdrop of 9/11, her parents divorced. Almost overnight, she went from honors student to full-time truant.

“I just couldn’t handle school,” she said. “I struggled to recover from my family breaking apart. My father left. My mother was working as a dental assistant, and she wasn’t home much. My grandmother and grandfather were working full time. It was very dislocating.”

By junior and senior years, Ilona was back on track, earning A’s in her all-AP schedule of classes and making a name for herself on the debate squad, even winning a state champion title in impromptu.

“But it was too late,” Ilona said. “I graduated Taft with a 2.7 GPA, in the bottom third of my class.” Her teachers had made up their minds about her. Informed by the school admissions advisor that she was “not college material,” Ilona went home and cried.

Luckily no one at Santa Monica College agreed with that assessment.

Falling in Love with Arabic

Ilona thrived at SMC, majoring in philosophy and excelling at debate. She earned first-place trophies for the Corsairs in extemporaneous and impromptu speech at the 2008 nationals, and she co-captained the team in 2009. “I’m very extraverted, and I love talking,” she said, explaining her debating success.

Later that fall, she transferred to UCLA, continuing to coach the Corsairs in her spare time. By then, though, she had found her life’s calling: as an Arabist.

Ilona had always been good with languages. Russian, French, and biblical Hebrew were woven into her early childhood education, and Slavic languages—Polish, Ukrainian, and Belarusian—came naturally. In 2009, during a summer internship as a translator at the U.S. Holocaust Memorial Museum in Washington, D.C., she decided to try her golden tongue on something new. A visiting Persian-Israeli scholar needed help cleaning up her English translations, and Ilona traded her manuscript-editing services for Arabic lessons. She fell in love with it almost instantly.

Teaching and research fellowships have taken her all over the Arabic-speaking world, including Morocco, Qatar, and Israel. In addition to classical and modern standard Arabic, Ilona has since mastered the Moroccan and Palestinian dialects. She’s also proficient in Farsi, Pahlavi (medieval Persian), ancient Greek (both Attic and Koine) and Aramaic.

Currently she’s pursuing her PhD in Islamic studies at Columbia University. Three years into her program, she’s just rolling up her sleeves to begin her dissertation. Her proposed topic: the courtesans of 9th century Baghdad.

She has two other writing projects in the hopper: a textbook chapter on the Qalandar Sufi sect of central Asia, and another on the political language of Islam. Both are in collaboration with her graduate advisor, Columbia religion professor Katherine Ewing.

This fall, she’s heading back to the Middle East on an advanced Arabic language fellowship through Harvard’s Center for Arabic Study Abroad.

After her PhD, Ilona plans to go on the academic job market. With UCLA, Harvard and Columbia on her resume, she’ll likely do well. But looking back, she attributes much of her success not to these elite institutions.

“Like fuel in a rocket, a lot of what I am today, it happened at SMC,” she said. “I never had a professor question my capacity. I never had anyone make me feel stupid or less-than. They all said, ‘Of course, you’re smart. Of course, you’re going to do great things.’ And that—to a young person, especially when they’ve struggled—is really redemptive.”

Asked where she’d like to end up teaching, Ilona doesn’t hesitate.

“I want to be back here in LA, and I want to teach either at SMC or UCLA,” she said. “I love both my almae matres. These are schools that serve low- and middle-income students the most. I think it’s really important to help give students the opportunities that I was given by the teachers at SMC and UCLA. It’s very hard to be an immigrant. And it’s very hard to be a transfer student. I understand that. As a professor, I want to also be a mentor.”