The Broad Stage Recommits to its SMC Relationship 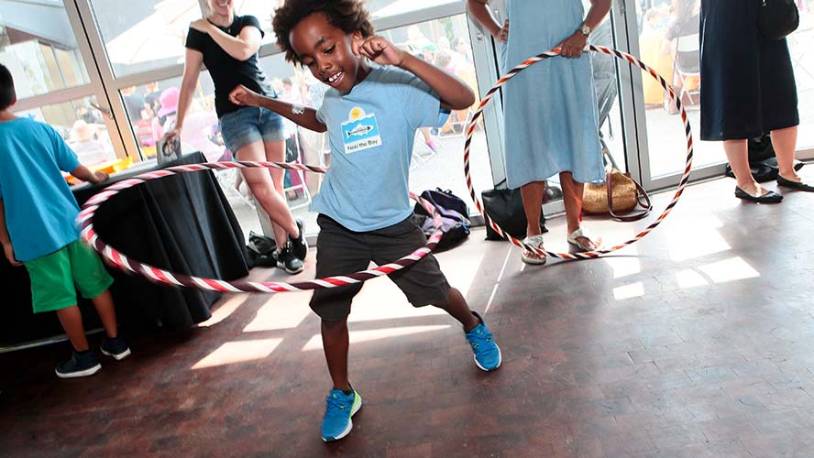 It’s been almost 10 years since the The Eli and Edythe Broad Stage at the SMC Performing Arts Center and Santa Monica College tied the knot. This year, they’re renewing their vows, in a manner of speaking.

The glue that binds them together is The Broad Stage’s Education & Community Programs office. Last spring, it hired Ilaan Egeland Mazzini as its new education director, with the goal of “beefing up and solidifying our commitment to the campus,” as she put it.

“For the first time, we’re intentionally putting together our program prior to the school year,” Ilaan said, referring to the 2018-19 season currently being finalized. “We’re looking at these artists and saying, ‘Let’s embed in their contract that they’re going to do an educational component. And let’s make sure that we tell SMC about it in advance, so teachers can incorporate it in their curricula and put it in front of their students.’”

Even before Ilaan arrived, deeply discounted tickets, open rehearsals, master classes with world-class artists and hands-on learning opportunities for SMC students have always been the norm at The Broad Stage.

International student Nancy Rivera Gomez has lost track of how many master classes she attended there. At least eight, she reckons, during her two-and-a-half years at SMC. ‎The most recent was with artistic director Lillian Barbeito and two professional dancers from the L.A.-based troupe, BODYTRAFFIC.

“They were amazing,” said Nancy, a dance major from Jalisco, Mexico, who just transferred to Cal State University Long Beach, where she is now pursuing a BFA in dance with a minor in international business.

Nancy has taken advantage of the SMC connection to The Broad Stage in other ways, too. Through her student job with the SMC dance department, she worked backstage and in the ticket office for more than a year.

“I got to know all The Broad Stage employees,” said Nancy, who hopes someday to start her own dance troupe in Mexico. “It was really a good experience to understand how a theater works.”

A Marriage Made in Santa Monica

The Broad Stage opened its doors in 2008 through a unique partnership with Santa Monica College. While the college owns the facilities at the SMC Performing Arts Center, an independent nonprofit oversees the steady stream of world-class performing artists who walk the boards of the 500-seat Main Stage and 99-seat Edye black-box theater roughly 250 nights a year, plus some 29 special matinee performances for 14,000 Los Angeles-area schoolchildren.

“It’s a shared space,” said Education & Community Programs manager Alisa De Los Santos. “We are the major tenant, but SMC is the first entity that books in the space. So performances by SMC dance programs and large music ensembles all happen here, too.”

A new instructional space, the East Wing, quietly opened in the spring; a grand opening will follow later this fall. The highlight of this $12.3 million expansion is a flexible performance space with a footprint identical to The Broad’s Main Stage. That means student productions can block out precise movements and tailor their dynamics to the Main Stage even when it isn’t available for rehearsals.

Efforts to find convergences between SMC’s educational mission and The Broad Stage’s artistic one continue apace, helped along by a stream of post-performance panel discussions, informal Q&As and four or five formal master classes a year.

Two weeks before their September 23 engagement, members of the Versa-Style Dance Company will make a special trip to the Broad Stage to teach an SMC master class. The L.A. based hip-hop troupe bases its two-hour workshop on choreography it would be performing for the Broad Stage audience. For an extra $10, students in the master class could, if they wished, see the show using deeply-discounted student tickets.

These $10 student tickets aren’t just for performance majors. Any SMC student can buy them.

“We set aside a block of 20 student tickets for almost every show on the Main Stage,” says Alisa. That may not seem like a lot, but it adds up quickly. Full-price Broad Stage tickets typically run between $35 and $85. The 2017-18 season opener, a Josh Groban fundraiser benefiting Arts Education and Community Programs, fetched $500 to $2,500 per person.

Even so, the $10 student seats occasionally go empty. Alisa lists a variety of factors: many SMC students work nights or have long commutes.

“Which is why several shows have open rehearsals during the day,” Ilaan explains. “That way, commuters can have the experience of coming to the theater and seeing a run-through of the performance. We’re also trying to do more outreach to our music students, because they’re right here.”

Another project aimed squarely at SMC students is “Trial by Jury,” an innovative series that grapples with contentious social issues through a mix of narrative film, theater and live dialogue—a process culminating in a verdict rendered by the audience itself. Building on the overwhelming response to last year’s “Trial by Jury: The Case of the N-word,” the series presents its second installment on October 23 with “Trial by Jury: A Case of Deportation.”

So popular was the first “Trial by Jury” event that SMC’s Public Policy Institute arranged a repeat performance last year. This season, the Broad Stage has set aside 100 seats to meet student demand, and it will host a welcome reception and town-hall event just for SMC students. “Because we knew the college had such a strong interest in this format and this topic,” Ilaan says, “we’ve been collaborating with Associated Students around this performance.” On the lookout for more ways to reach SMC students, Ilaan identified another opportunity through an existing project called Family Circle. Geared for low-income households within 10 miles of campus, this community program gives participating families free access to three Broad Stage shows of their choice, together with hands-on learning components, such as a backstage tour or personal conversation with one of the performers. Family Circle also provides a catered meal and Santa Monica bus vouchers for guests needing transportation. The program—serving 30 families a year, or about 150 people—has been around several years, but by partnering with the college’s Extended Opportunity Programs and Services, for the first time it is enrolling qualified current SMC students who are themselves parents of young children.

Her team is designing a new film series in collaboration with the Office of Student Life and Brave New Films, a local company that makes short, impactful films around social justice issues. Expected to launch next year, the series will be screened in lecture halls on the main campus, with Ilaan’s team playing a curatorial, matchmaking role.

“Wehope to be present on the main campus in a more visible way,” she said.

That desire is shared by The Broad Stage’s leadership, including its board of directors and two artistic advisory boards, the latter of which are packed with world-famous names like Dustin Hoffman, Plácido Domingo, Quincy Jones, and Anna Deavere Smith.

“We are striving to deepen these relationships and create more synergy on campus and on our stage,” said SMC Performing Arts Center director Jane Deknatel. “Our Education and Community Programs have been an important bridge between The Broad Stage and Santa Monica College students, faculty and staff.”

(Photos included in the slideshow are from a master class by Versa-Style Dance Company at the SMC Core Performance Center on Sept. 13, 2017; and from the community outreach festival Broad Fest)

Dance Theatre of Harlem, three performances, April 20 & 21, 2018 An evening of neo-classical and contemporary ballet from the fabled company’s repertoire, showcasing choreography spanning 1993 to 2014.

Bedlam’s Saint Joan and Hamlet, 12 performances, in repertory, April 5 through 15 Stripped-down stagings of Shakespeare’s Hamlet and G. B Shaw’s Saint Joan, brought vividly to life by a cast of just four actors. The New York-based Bedlam theater company specializes in re-configuring the classics to “upend audience perspectives” and “subvert the relationship” with familiar texts and authors.

For more information, go to thebroadstage.org