For the Love of Students 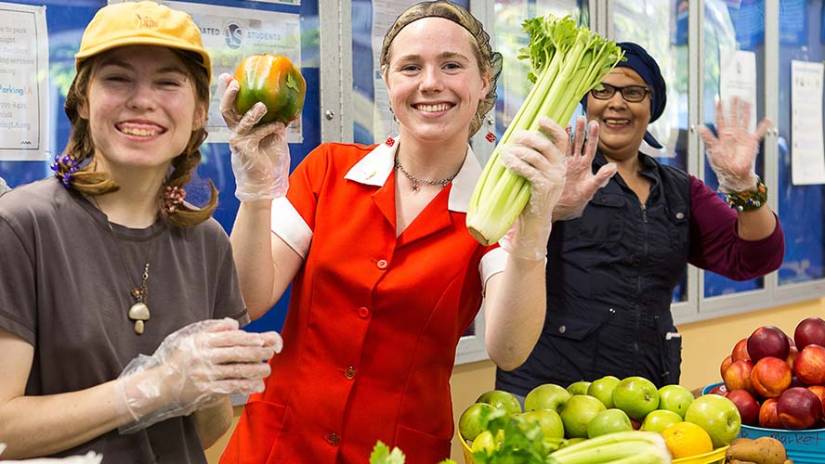 It is a truth universally acknowledged that it is difficult for a hungry student to learn. While there are no comprehensive nationally representative studies to look at food (or housing) insecurity on college and university campuses, an April 2018 research study conducted by the Wisconsin HOPE Lab—which surveyed 43,000 students at 66 institutions nationwide—found that 42 percent of the community college students felt food insecure.

These findings came as no surprise to a group of dedicated Santa Monica College employees and student leaders who have been working tirelessly to make use of available resources and build connections with community organizations and nonprofits to create as wide a “safety net” as possible so that no SMC student goes hungry. What’s included in the net? A weekly farmer’s market (Corsair Market); a FLVR food voucher program funded by Associated Students (AS); five food closets across main campus, collectively called “The Galley”; and a newly launched partnership with the federally-funded CalFresh.

Perhaps most noteworthy of all—the now campus-wide effort involves Associated Students and the Office of Student Life; Auxiliary Services; the Campus Store; and the Center for Environmental and Urban Studies/Office of Sustainability—is the fact that it began, quite literally, with students feeding students.

Wednesday afternoons in the SMC cafeteria are pretty much like any other—except for a bustle of activity in the east side. Smiling volunteers stand behind crates and baskets full of fresh fruits and vegetables. There are also some pre-packaged, non-perishable food items—granola bars, cookies, peanut butter, and more. A near-constant stream of students line up with bags and student IDs; they leave with their bags full of food that will nourish and help sustain. The bounty is completely free: they haven’t had to pay a penny.

The Corsair Market provides 1,500 pounds of fresh produce every Wednesday during the fall and spring semesters and feeds roughly 150 students every week. The market was inspired by a hugely successful bi-annual student-organized free farmer’s market called Students Feeding Students (this still takes place as well). Veronica Casillas, a counselor in the Office of Student Life, came across a food recovery agency called Food Forward and approached Dr. Nancy Grass, the Associate Dean of Student Life with the idea of replicating Students Feeding Students on a more regular basis.

Veronica and Nancy went to Ferris Kawar, SMC’s project manager for sustainability and adviser to several eco-focused clubs, with the idea. And that was that. Just three weeks later, in the spring of 2017, Santa Monica College held its first weekly Corsair Market in front of the Organic Learning Garden.

Each week, volunteer SMC employees and students collect about 8 boxes of produce from farmer’s markets (Food Forward solicits unsold produce from vendors each week using volunteers from SMC and the community). And Jorge Valadez, an operations assistant in the SMC Campus Store, drives to the local Westside Food Bank facility at 7:30 a.m. before his shift at work begins. He spends four hours, more or less, sifting through bins and cold cases of donated produce and foods from grocery stores like Trader Joe’s, Whole Foods, and Gelson’s (SMC pays just 2 cents per pound of food). These will go to the Galley food closets on campus and to the Corsair Market. (Fun fact: Last Thanksgiving, 80 turkeys were given away to SMC students).

Jorge brings back roughly 1,200 pounds of produce and non-perishable food items to campus. It is a labor of love, and Mitch Heskel, SMC’s Dean of Education Enterprise, points out that “Jorge is a perfect example of the spirit of wanting to help students.” (David Dever, Director of Auxiliary Services, is also heavily involved with the logistics of retrieving and delivering food and used to do what Jorge now does).

This spirit is visible in the many student volunteers at the Corsair Market. Take Gicela Galadez and Lisset Martinez, for example. After an hour of standing and handing out produce to their fellow students, they peel off gloves and hairnets and organize their recyclable bags, which are filled with leftover produce: kale, mint, and small packs of Chips Ahoy. They are getting ready for afternoon and evening classes, and for a long commute home.

Lisset, a Liberal Arts major who wants to be an elementary school teacher, says that “it is wonderful” to be able to help give food away to fellow students, many of whom (like Gicela and Lisset) live in “food deserts”—places where it is hard to get affordable or fresh, good-quality food. “Here in Santa Monica—there’s Trader Joe’s, Whole Foods—all these markets,” says Gicela. “We don’t have any of these where we come from.”

When asked about how the Corsair Market came together—several people being inspired at once, several departments finding a way to collaborate—Nancy Grass calls it “a confluence of things.” The confluence has, to date, seen 65,645 pounds of food flow through its Corsair Market and The Galley closets (as of Sept. 17, 2018).

Brooke Harrington, currently AS Director of Sustainability and an Environmental Studies major, has been volunteering at the market since fall 2017—“it was my first real experience doing something for the school”—and now takes on a lead role. “It’s really nice to give produce away to students who need it, to see the gratitude, the community aspect of it,” says Brooke. She adds that volunteering “jumpstarted” her involvement on campus with eco-focused clubs like Plastic Free SMC, and that working at the market is entirely “selfless and all about helping hungry students.”

Marvin Clerk studies game design at SMC; he is pleased to have a bag full of vegetables to take home to his mom in Culver City. “Zucchini, onions…pretty much they look really damn good,” he says, adding that he did not like vegetables until he tried what he calls “actual”—fresh, farmer’s market produce—vegetables from the Corsair market.

A Little Something for Everyone

The Galley food pantries—first set up in fall 2017—are essentially cupboards/mini-closets in five locations on SMC’s main campus: EOPS/Guardian Scholars, Athletics, Counseling, Associated Students (Cayton Center), and the Veterans’ Resource Center. Things requested by SMC staff and students in the area often determine what goes where. To find requested items, Jorge often has to sift through large bins of miscellaneous products at the Westside Food Bank. Athletics will often get food items like protein bars and fresh fruit, for example. Some pantries also stack baby food products for single mothers and gently-used clothing.

When students go to a pantry, they will see food nutrition posters—like the “Eat a Rainbow” ones—that inform them on what constitutes a healthy meal. Things are often grouped together to make it easy: spaghetti and pasta sauce, canned tuna and black beans, and so on. Nancy Grass wants students to know that the galleys are there for them. “Use it, please,” she says. “We don’t want you to be hungry.”

The Flavor of Empathy

Before she became Associate Dean of Student Life, Nancy Grass was a professor for almost two decades. When she began working with Associated Students, student leaders had identified food and housing insecurity as the most challenging obstacle they’d faced in trying to attend college, something she had long known to be true. As a professor, she had stashed protein bars, fruit, and water bottles in her office for hungry students.

In spring 2016, this group of student leaders launched SMC’s first food lunch voucher program, called “FLVR.” AS Director Jonathan Hughes developed the original program; another director, Jazzmin Sardin would help streamline the program’s format to be based on a student success and retention model. The FLVR program serves, on average, 200 high-need students with up to 18 free hot lunch vouchers per semester. It continues to be funded by Associated Students.

While SMC has received $56,397 in the form of a “Hunger Free” allocation/grant from the California Community Colleges Chancellor’s Office to help launch and expand CalFresh and other food security programs, Nancy Grass was inspired by the Swipe Out Hunger program that allows students to donate meals from their meal plans at cafeteria checkouts to hungry students to create an SMC version. This fundraising campaign—that aims to make FLVR and other food security programs self-sustaining—is named after the year of SMC’s founding (1929) and the concept is simple.

“We figured that for every 19 people that donate 29 cents, it pays for one food voucher fully,” says Nancy. Doing the math quickly, she adds: “I’m in the cafeteria at least five times a week. So, over the course of a month, if I’m paying for one meal and say, 1,000 people who work at this college pay for one meal a month…that’s a lot of meals!”

Nancy says the cafeteria has seen a “constant flow” of people who say they want to donate more than 29 cents. “People are just really anxious to give,” she says.

Groceries on the Table

This fall, Santa Monica College also launched an expanded partnership with CalFresh, a federally-funded program to help those in need purchase groceries. Eligible students currently can qualify to get as much as $192 per month for groceries. Nancy and Meka Webb—a consultant who has extensive experience in working with County food security programs and nonprofits—have been busy rolling out the associated “CalFresh ‘Assistor’ Program”. An LA County program, the Assistor Program allows institutions to assist students in signing up for Cal Fresh, through trained employees, generally counselors whose day-to-day work involves high contact with needy students.

In the meantime, The County’s Department of Public Social Services has also sent a “mobile unit” and personnel for several “CalFresh Days” where students can apply for the benefit. (SMC was also instrumental in encouraging the County—with the support of Education and Social Services Deputy Genethia Hudley-Hayes and the office of District 3 Supervisor Sheila Kuehl—to prioritize campus vendors in becoming participants in the CalFresh Restaurant Meals Program). Campus Kitchen, a popular vendor in the SMC cafeteria, was approved to accept EBT cards in spring 2018; students also have access to vendors near campus such as Burger King, Domino’s Pizza, Pizza Hut, Subway, and Jack-in-the-Box.

Between the Galley food closets, which students can access daily, and FLVR (one hot meal a week, plus, hopefully, leftovers), the weekly Corsair Market, and CalFresh for those who qualify, Nancy says that “it’s a very outstanding golden safety net we’ve been able to develop…this is a great local model of what can be done with a limited amount of resources and time.”

Her dream, she adds, is that every student enrolled in a community college has access to at least one healthy meal a day.

More information on SMC’s Food Security Programs. You may also contact Meka Webb at 310-434-4065 or foodsecurity@smc.edu.