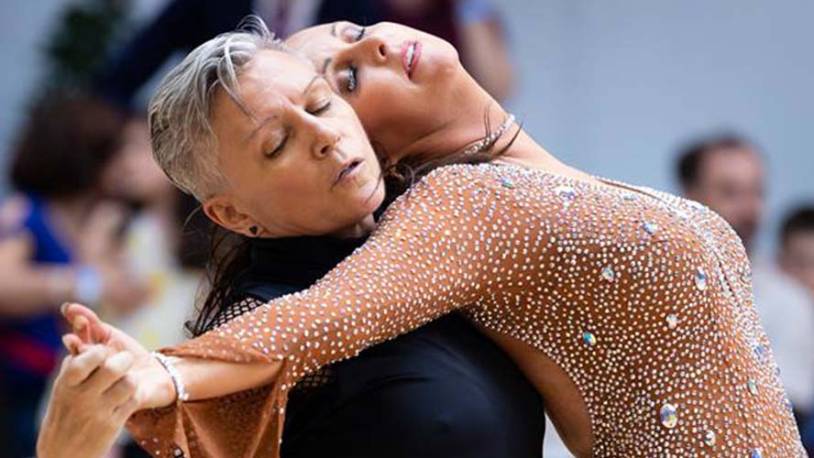 SMC was represented with flair at the Gay Games 2018 in Paris this year! Jo Popadynetz, SMC course materials buyer, and her dance teacher/partner, Deborah Fields Perez, brought home the Bronze Medal—they ranked third in the World in Women’s Sr. Latin Dancesport Worldwide Competition. “Mainstream society doesn’t exactly hold out open arms to butch lesbians in general, let alone to those of us who want to lead ballroom dancing”, says Jo. “I encourage all of our students at SMC, and around the world, to follow your joy, don’t let anyone stop you from doing what you love!” Almost 10,400 athletes participated in the Gay Games from over 80 countries. Jo’s dedication to countless nights and weekends of rehearsals and intensive physical therapy sessions paid off with a world title. You make us (pun intended) so proud, Jo!

English instructor Jennifer Havenner is excited to announce the launch of her latest novel, Hag, which was released October 2 (Jennifer writes as Kathleen Kaufman). Hag is the story of an ancient line of Scottish witches from ancient times to present day. There was a book launch at Book Soup on October 5, with a reading, author signing, and, says Jennifer, “an overall celebration of all things witchy.”

What’s in a name? That question resonates in literature and in life. A new volume, published by USC’s Figueroa Press, contains essays from Thematic Autobiography workshops conducted by SMC trustee Susan Aminoff, Ph.D. and Marlene Wagner, Ph.D. Workshop participants offer personal reflections to show how their given names have inspired, encouraged, or otherwise influenced their behavior.

SMC Art Professor and painter Marc Trujillo has a new show at Ventura College’s New Media Gallery, which will run from Nov. 1 – Nov. 29, 2018. The show, called “The Underwater Part of the Iceberg”, will feature Marc’s paintings of “the purgatory” of American urban and suburban landscapes such as gas stations, shopping malls, big chain stores, and restaurants.

The Other Conquest, the highly acclaimed feature film directed by SMC Film Production faculty lead Salvador Carrasco, was screened and discussed at Antioch University in Santa Barbara as part of an effort to support conservation initiatives and indigenous people. The film is a drama about the aftermath of the 1520s Spanish Conquest of Mexico told by the perspective of the indigenous Aztec people.

Judy Louff, administrative assistant in the Theatre Arts department, participated in the Walk to End Alzheimer’s in Santa Monica this month. The reason strikes close to home: Judy’s mother, a longtime Santa Monica resident and retired secretary for many Samohi principals, suffers from Alzheimer’s. Judy is a member of the Grand Champions Club for raising over $1000, and you can check out Judy Louff's walk page right here.

The Music department sends in several brags, courtesy of Director of Choirs Jeremiah Selvey. Here goes: First: the Music Department marched in solidarity with LGBT students and cheerleaders in the Los Angeles Pride Parade. On July 31, Jeremiah submitted to Centaur Records, a major classical label, the final product for a two-CD project entitled “Empowering Silenced Voices,” featuring 21 tracks and nearly two hours of new music on issues that are “socially conscious” – such as human rights, human displacement, war, terrorism, the intersection of technology and humanity, and environmentalism. The CD will be released in about six months. In June, Jeremiah also presented at the Indiana Choral Directors Association conference on “Integrating Social Consciousness into Your Choral Rehearsal and Performance.” In addition, he served as a judge for The American Prize 2018 in two categories: Choral Composition for Professional Composers and Choral Performance for the Collegiate Level. Check out Jeremiah’s bio on this page. And—as if all that were not enough—Jeremiah also received a grant from 4Culture in Seattle to perform a concert featuring world premieres of works on social consciousness.

More brags from the Music department! Professor Brian Driscoll has been elected president of the board of the children’s music non-profit Elemental Music, whose mission is to inspire, train, and nurture young musicians. They currently serve nearly 300 young participants each year across seven programs, including a wide variety of ensembles and lessons, with 40 percent of families receiving need-based financial aid.

SMC Associate English Professor Diane Arieff is proud to share the results of the English Department’s third annual English 1 essay prize (the results were announced in a ceremony held on the main campus August 22, with the student winners, their families, and English faculty all in attendance to celebrate). Drawing from a competitive pool of papers nominated by English instructors, the contest panel chose the strongest research-based essays for this year's contest. Along with a certificate, the First Place winner receives a check for $300; the Second Place Prize $200; Third $100, and $50 for Honorable Mention.

SMC student Andrew Camacho, whose essay, "Going Vegan: Curbing Environmental Pollution and World Hunger through Diet," took first place, said the process of writing his research paper was "eye opening in several ways." The most important thing, Camacho said, was "the process of validly taking a position and then being able to express those thoughts clearly so that other people understand what I'm saying . . . my English 1 class at SMC is something I will remember fondly over the course of my life."

Janelle DeStefano, Associate Professor of Music (Voice/Opera) at SMC has been invited to present a workshop on zarzuela (Spanish operetta) at the National Winter Workshop for the National Association of Teachers of Singing (NATS) this coming January 2019 in Florida. Placido Domingo, who came backstage to speak with the performers during intermission, attended SMC Opera Theatre’s 2014 production of the zarzuela Luisa Fernanda.

Talk about resilience in adversity. Laurie Heyman—who is administrative assistant to Sherri Lee-Lewis, the VP of Human Resources—was diagnosed in 2011 with a muscular dystrophy disease called FSHD, or Facioscapulohumerol Muscular Dystrophy. Currently there are no cures to stop or alleviate this disease. Since the diagnosis, Laurie has been involved in raising awareness, raising funds, and participating in scientific research studies to support the search for a cure, and on August 19, she helped launch the Los Angeles Area Chapter. She has been appointed as the first Director of the Los Angeles Chapter. On October 21, the Chapter will be hold their annual fundraiser at the beautiful Cicada Club in downtown Los Angeles. If you are interested in learning more about FSHD, or in attending the fundraiser, The Ghostly Gala to Vanish FSHD, please contact Laurie (Heyman_Laurie@smc.edu).

Last October, administrative assistant Lisa Burns applied for a scholarship through UnionPlus.org. In May 2018, she was notified that out of over 6,000 applicants she was chosen and awarded the highest scholarship of $4,000 to continue her education through Brigham Young University Idaho’s online program. Lisa also became a Mimi (grandmother) for the first time on August 4, 2018 to Anya Mae Meiling (rhymes with smiling). Congrats, Lisa!