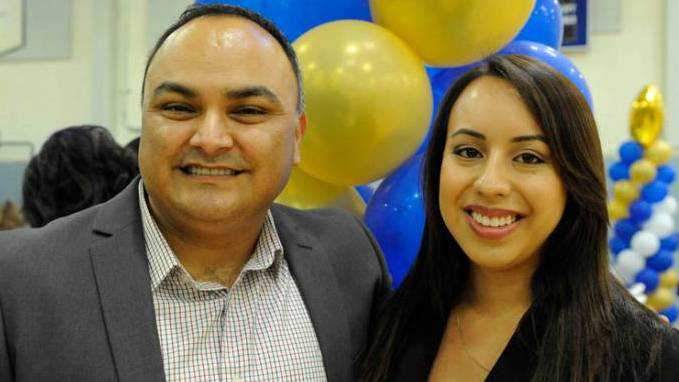 When Marilyn Perez-Garcia ended up in foster care at age 15, college seemed an unachievable dream. This fall, after three years at Santa Monica College—with the support of SMC’s Guardian Scholars program and her own hard work—she is headed to the University of California, Riverside on a full scholarship.

The SMC Guardian Scholars program provides support services to foster youth, a population for whom educational disparities are a harsh reality. According to the National Working Group on Foster Care and Education, although 84 percent of high school-aged foster youth want to attend college, only 20 percent of those who graduate from high school move on to college, while only 2 percent to 9 percent of former foster youth obtain a bachelor’s degree.

To break that pattern, the Guardian Scholars program offers academic, financial aid and mental health counseling as well as career planning and workshops addressing essential life skills such as stress management and financial literacy. Six SMC Guardian Scholars, including Perez-Garcia—who eventually plans to go to law school or a master’s program in psychology—are transferring to four-year institutions this year.

Debra Joseph-Locke, the senior student services specialist who oversees Guardian Scholars at SMC, prides herself on maintaining an open-door policy. “I tell students I will see them at any time if I’m not in another meeting,” she says. “Many stop by because they are in crisis.”

Housing and hunger are among the biggest challenges. “Many are homeless or living in their car,” says Joseph-Locke. “They don’t necessarily tell you that right off the bat. It takes time to gain their trust.”

Students who self-identify as foster youth in their financial aid or SMC applications are then contacted about the Guardian Scholars program. The program also receives referrals from high schools, caregivers and social workers. Those who choose to join Guardian Scholars complete a short in-take application and then meet with Joseph-Locke one-on-one to arrange counseling and other support—from housing to medication and from food assistance to transportation support to ensure they can get to and from their classes. The staff even helps students register for auto insurance if needed, and students are reimbursed for non-tuition expenses like the health fee.

SMC received a three year grant from the Angell Foundation of $48,000 per year to establish Guardian Scholars, and additional support came through grants from the S. Mark Taper Foundation, as well as the Stuart Foundation and the Sidney Stern Memorial Trust.

Meanwhile, partnerships with UCLA and Loyola Marymount University give participants access to information on transferring to universities and activities to enhance their academic futures and build a network of support. Organized visits to the UCLA and LMU campuses, as well as California State University, Northridge; and California State University, Los Angeles, also help student make decisions about the best fit for their academic ambitions.

Now in its third year, the SMC Guardian Scholars program is steadily growing. The first year saw 59 students enter the program, with 75 participating the second year. “We expect even more for the third year,” says Joseph-Locke, adding that many more who are eligible have not yet taken advantage of the program because of the stigma associated with foster care.

“Those who choose not to join are often those who need it the most,” she says. “We provide support, not labeling. We make them feel part of the fabric of the college.”

The three year grant from the Angell Foundation runs out in June 2016 and SMC will seek new funding for Guardian Scholars including through SB 1023, a bill signed by Governor Brown last September which authorized the California Community Colleges Chancellor’s Office to provide additional funds to up to 10 selected community college districts for special support services for foster youth.

In April, SMC Guardian Scholars held its first awareness week—designed not just to spread word about the program but also to break down stereotypes about foster youth.

Perez-Garcia—who helped other foster youth by interning at the juvenile dependency court—says that, while she was bullied in high school for being put into foster care, she felt accepted by Guardian Scholars. “My message to anyone in foster care is to know that education is truly a chance at a better life,” she says.

To find out more about the SMC Guardian Scholars program, click here.