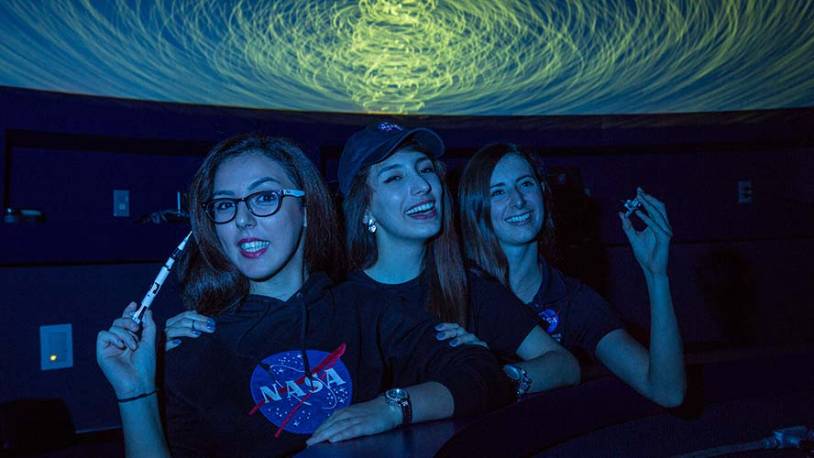 NASA is best known for interplanetary exploration, but here on Earth, one of NASA’s critical missions is to ensure that it has a diverse workforce with strong training in Science, Technology, Engineering, and Math—a combination referred to as STEM—now and in the future. And now, thanks to three initiatives, Santa Monica College STEM students have a chance to experience NASA and JPL up close and personally, and discover what academic and professional options are open to them.

NASA’s National Community College Aerospace Scholars (NCAS) brings students into JPL for four days to build a mock Mars rover and meet JPL scientists and engineers. The Student Independent Research Internship (SIRI) matches students with JPL mentors for a semester to work on research projects, concurrent with their coursework at SMC. And a new 10-week summer internship program funded by NASA offers an in-depth experience at JPL, working for a JPL researcher.

The NCAS Gateway to No Limits

SMC’s STEM initiative has been encouraging traditionally underserved and underrepresented students to look toward career opportunities they may never have imagined—whether it’s working on a mission to Mars or with the technological, research, and other staff that support such projects.

Take, for instance, Amanda Duval, an SMC math and physics student who participated in the NCAS session at JPL in October 2015.

“In my first year at SMC, I didn’t know what I was doing, but getting into STEM really saved me, and helped me focus my direction and goals,” says Duval. “The NCAS program opened my eyes to the opportunities at other schools, JPL, and in the aerospace industry.” She’s applied to transfer to a University of California campus this fall, with plans to major in aerospace engineering.

Since 2012, SMC students have participated in NCAS sessions, which feature a five-week online course that culminates in a four-day onsite experience at JPL and other NASA centers. It’s an entry-level gateway for community college students to test their STEM skills, and to discover options available to them for academic advancement and professional growth.

“There's a misconception that NASA is only interested in Harvard or MIT graduates” says Alicia Baturoni Cortez, program manager for NCAS at NASA’s Johnson Space Center. “We do want them, but we are also interested in people who are passionate about space exploration, and who are really good in their chosen field. We bring in community college students who may have watched a shuttle launch on TV as children, and show them that working for NASA is a realistic goal, even if they never dreamed it was attainable.”

The NCAS experience, offered twice a year at JPL, attracts more than 1,000 applicants nationwide per round; 216 were selected for the Spring 2016 session at NASA centers across the country. Of the eight SMC students selected in April—Kevin Payumo, Sarah Eldin, Jessie Shin, Cameron Smith, Tsun-Ching Song, Salar Tabesh, Romina Mirtabatabaeipour, and Parisa Khorram—three were headed to JPL, and five to NASA’s Armstrong Flight Research Center in Edwards, CA.

During the NCAS session, four teams of 10 students spend four days conducting an exercise that reflects what an actual NASA team does, creating a mock proposal and competing to design, build, and test a LEGO Mars robotic rover. The students also receive tours of the centers and labs, talk personally with top engineers and scientists, and are treated to a resumé workshop to learn how to emphasize their STEM skills.

SMC is also one of only four minority-serving community colleges nationwide selected by the NASA Office of Education for a cooperative agreement known as MUREP MC3I (Minority University Research and Education Program, Community College Curriculum Improvement), generally referred to simply as MC3I. Established in October 2015, MC31 allows SMC to fund paid summer internships for both students and faculty to work on applied projects at JPL starting in 2016. More than 150 applicants vied for nine student and three faculty internships during the first round.

SMC Geology Professor Dr. Cara Thompson, Principal Investigator for the MC3I cooperative agreement, was surprised by the interest. “We were expecting maybe 20 applications,” she says. “Instead, we received 150!” In addition to internships, SMC is developing curriculum and math modules, as well as bringing in experts as speakers, and organizing tours of JPL.

The new 10-week MC3I-funded internships will place SMC students on teams led by a JPL researcher, collaborating alongside graduate and post-doctoral students on projects. SMC faculty will have a chance to engage in professional development that helps them stay current in their research field and pursue their own project proposals.

The SIRI Pathway to JPL and Beyond

SMC students may also apply for SIRI and be paired with a JPL scientist or engineer for a semester-long, credit-based internship at JPL. SIRI interns are nominated by SMC faculty and selected by JPL mentors to work in-depth on a particular research project.

The SIRI program is more intensive; a semester-long internship at JPL concurrent with a student’s studies at SMC. Though Ivria Doloboff wasn’t accepted on her first try, her persistence paid off. Continuing through various other internships at JPL, she now works there on several different projects, among them NASA’s Astrobiology Institute: Icy Worlds Team, performing research and experiments that address geochemical conditions for life’s emergence, as well as the environments that may sustain life today on Mars, icy moons, ocean worlds, or exoplanets.

“Being an intern through the SIRI program while a student at SMC changed my life forever,” she says. “Working as a contractor at JPL is a direct result of the high-quality mentorship I received from my SMC faculty sponsor, JPL mentors, and opportunities through the JPL Education program.”

Thanks to her SIRI experience, SMC chemical engineering student Po Chee Leung was awarded a Summer 2016 research internship at UCLA focusing on water purification, which dovetails with her goal of an advanced degree in the field of environmental pollution.

The skills she gained at JPL—learning complex laboratory procedures, operating multiple analytic instruments, participating in discussions about experiment challenges, and performing data analysis—more than qualified her for her UCLA internship.

Inspiring Students to Reach for the Stars

Doloboff credits SMC Earth Science Professor Simon Balm for her chance to get involved. “Professor Balm’s encouragement was the catalyst for the blossoming of my potential to achieve a lifelong career goal,” she says. “My first reaction to the SIRI opportunity was that JPL would never select a community college student. But, with his encouragement, I applied anyway. Mentors don’t select strictly upon academic criteria; instead, the multidimensional qualities of a student—including interpersonal skills, interest, drive to learn, and character—are evaluated as well.”

Although a minimum GPA of 3.0 is required for all these programs, SMC Computer Science Professor and JPL liaison Jinan Darwiche, who oversees the College’s SIRI program, says that STEM faculty encourages “students who are eager to learn, and who realize what an opportunity JPL presents them with.”

Both current and former NCAS students credit SMC Math Professor Dr. Hafedh Herichi for inspiring them to apply. “When he said he would write my letter of recommendation, his excitement motivated me to do my best!” says Amanda Duval. “Not all skills are genetic. Thanks to these STEM programs, we can mold ourselves into the person we want to be.”

Dr. Herichi concludes that motivation cuts both ways. “I've taught at many places in Southern California,” he says, “but the one thing SMC stands out for is students with strong potential to strive for excellence and to grow academically.”