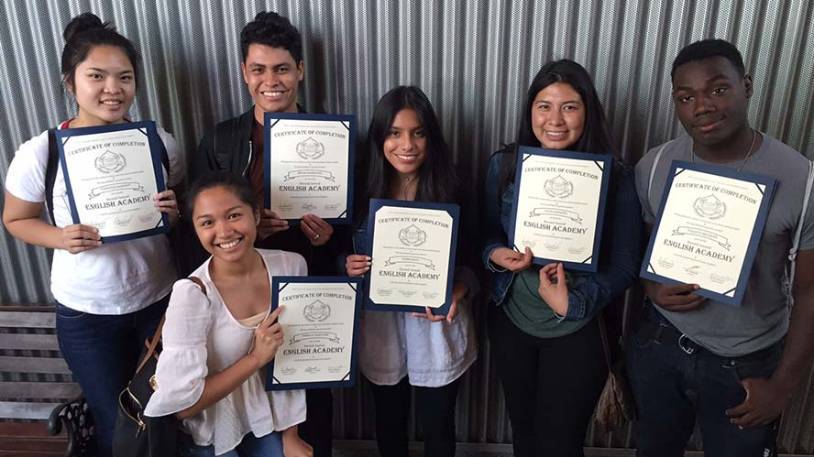 Imagine skipping a year of pre-college English, because you made it through a two-week, rigorous boot camp called "English Academy." It sounds too good to be true, except that 213 Santa Monica College (SMC) students - a whopping 92 percent of the participants - did just that. This was the second time the Academy was held. Of the 164 students in the inaugural English Academy, held last August, 150 - or 91 percent - passed directly into English 1.

"Not just do they get to skip a year’s worth of English, but that translates to a year of financial burden which, for low-income students, is a really big deal because many of them have to support their families," said SMC English Professor Susan Caggiano who taught in the Academy and will be a faculty lead beginning next summer.

The Academy compresses up to two semesters’ worth of fundamental college writing instruction into a two-week boot camp for first-year students who otherwise would have to enroll in at least one pre-college level class before progressing to transfer-level English 1, the research-oriented reading and writing course (it also satisfies the English requirement for an Associate degree).

The prerequisites that many students-especially those coming from traditionally underrepresented backgrounds-have to take to in order to be transfer-ready have proven to be a roadblock to their success. The United States has the highest college dropout rates in the industrialized world, and studies have shown that too many prerequisites contribute to the problem.

The SMC English department found this mirrored in the numbers of underrepresented students making it into English 1, or else, took English 1 and did not succeed. The Academy would, they hoped, remove some obstacles and move students faster towards transfer or a career.

How do English Academy students who are placed into English 1 then fare? (Students submit a final research paper for assessment.). Last fall, the first cohort succeeded in English 1 at a rate of 83 percent. By comparison, out of those enrolled in the course but not through the Academy, 69 percent succeeded.

The Power of Community

While the reading, writing, and research skills taught in the Academy are crucial for academic success, there is something else "equally valuable," says Susan. Academy graduates are enrolled into English 1 as a cohort, so they can continue to draw from shared experiences.

"They’ve developed a sense of belonging, a sense of community," says Susan. "Because that’s one of the things that students who come from inequitable circumstances often experience - the feeling of not belonging on a college campus, feeling like they’re outsiders."

"It’s cool because I met a lot of people and made friends with people I would normally not hang out with!" says SMC student Tajaun McLean, who commutes from South Central LA.

It Takes a Village

But there’s more. The English Academy - which operates as a part of SMC’s First Year Experience program, a student success program for first year students - offers students a complete support network, points them to other tools they will need.

"The counselors assist students with enrolling, make sure they understand how to use the resources at SMC; we help them navigate the matriculation process," says SMC Counselor Jose Hernandez. That includes things like making an educational plan, deciding on next steps and transfer goals, and financial aid. "We also encourage them to get involved on campus, join student clubs, and do internships."

Students kept telling Susan over and over again that they had no idea all these resources existed. "Students are pretty savvy-look at how they use the Internet and social media! Now they know how to use this institution’s network of librarians, professors, and counselors," she says.

English Academy graduate Sophia Shewfelt said that what she enjoyed most about the Academy was "one-on-one support from [my] professor and writing assistant - and classmates." Many of the peer writing assistants who assisted the 15 instructors were alumni from last year’s first-ever Academy.

Jose said that the program’s biggest impact definitely is "the connection to the professors, who keep their doors open to new students. That’s huge." Susan added that a lot of students she taught in English Academy would come to her office hours, instead of going to their instructor. "After spending 40 odd hours in two weeks with an instructor, that kind of connection just happens."

It Must be Said

For their research assignments, students were encouraged to explore topics relevant to their own lives, to tell their story in the context of a larger societal issue. A football player in high school, Tajaun talked about how the concept of equity relates to football and coaching. "It’s just like in classes, where teachers focus on the good students," he says.

"At first I wasn’t very good at football, and the coaches just kind of explained the basics and left it at that," says Tajaun. "Then, I started learning from some other players and I got very good and became a star and all that. Then the coaches started paying attention to me!"

The English Academy taught Tajaun how to "use the opposition’s points to strengthen your argument in an essay." He hopes to major in business at SMC, and become an entrepreneur to support his mom, whom he has seen, "…work so hard - missing my football games, track meets, birthdays - to take care of me and my disabled brother."

"I thought English Academy was going to be writing essays, day in, day out, but they really just went over stuff that you should have known, from, like high school," he adds.

English Academy students present their research papers at a symposium at the end of the two weeks. Counselor Jose Hernandez recounted a few that deeply moved him. They included a student who had the skills he needed in Math, but failed to move up to the next level because the test (and its many word problems) was in his second language, English.

Another student talked about how he always felt alienated and behind everything in his ESL class, feeling like "he was from a different world." Yet another talked about how he was encouraged to persist in school only because a teacher paid him a house visit.

"I walked away with tears in my eyes," said Jose, "hearing all the things that students have experienced in school, and to think that they came to college in spite of it. I feel like the most valuable thing English Academy has done for a lot of them is being able to accept where they are coming from and who they are…to understand that their voice is important."

This year, the program also included a talk from UCLA Professor of Education Tyrone Howard, who shared his own journey of how he succeeded in college and went on to obtain a Ph.D. in spite of a mountain of adversity - including trauma within the family.

Speaking of the Academy’s success, Susan Caggiano said: "I was excited by the outcome but I was not totally surprised, I understand what our students are capable of. If you provide them with an environment that tells them they have a chance, they’ll take that chance."

SMC’s First Year Experience also has other "bridge programs" for new, first-time students such as Summer Bridge and College Day. In addition to the 15 instructors, 2 faculty leaders, and 1 counselor involved in English Academy, 3 librarians taught academic research workshops. The English Academy was funded by the State of California’s "Student Equity" budget for California Community Colleges. In 2015-2016 the statewide allocation for equity was $140 million of which SMC received approximately $1.9 million. These funds were expended in accordance with a comprehensive plan – a multipronged answer to the state’s call for community colleges to help close the equity gap – which includes devoting resources to ongoing research and inquiry into assessing the challenges faced by underrepresented students, and bolstering existing student support services.