No Debate About the Speech Team 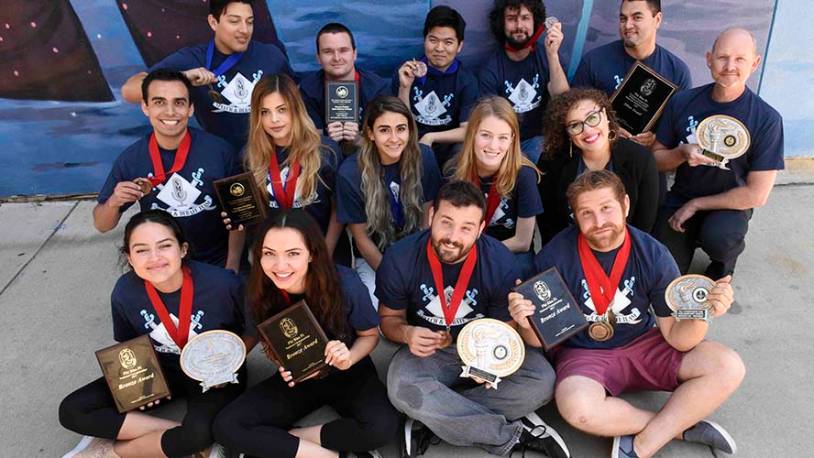 The Santa Monica College Speech and Debate Team capped a yearlong hot streak with wins at the Pacific Southwest Collegiate Forensics Association’s (PSCFA) Cool-Off tournament. But however notable their awards, the team’s real prizes are in the students' experience, the skills they build, and the bonds they form.

Team membership begins with a two-unit class and although not every student goes on to compete, they all benefit from gaining skills in critical thought, organization, and persuasive communication.

“I love the confidence debate gives,” says 2016-17 team captain Thal Gondim, who is transferring to UCLA this fall to study business economics and wants to become a judge. “You learn to back up your views when talking to people with different opinions. That’s a very beneficial ability — especially today.”

The team is coached by communications faculty members Luis Andrade, Nate Brown, and Brianna Broady. Nate revived the speech and debate program in 2006, and for several years served as the team’s sole faculty coach. Luis joined in 2015, while Brianna came on board a year later. Their expertise has enabled the team to add other forms to its longstanding specialty of parliamentary debate, including such styles as impromptu, extemporaneous, informative and persuasive speaking.

The wider range also has heightened the team’s popularity. “Every semester, we have more and more people who want to join debate,” Luis says.

In his inaugural competition with the team, Edward Lee won first place in impromptu speaking and took a gold medal at the PSCFA tournament in the International Public Debate Association (IPDA) division. Edward, who is studying engineering and computer science, finds that the skills being honed by his time on the team fit perfectly with his future goals.

“I believe they help you advance beyond being just an engineer into becoming a leader, managing and working with others to really accomplish things,” he says. Pragmatically, he observes, “Even when it comes to your salary, you’re going to debate on the merits of why you deserve a raise.”

Leila Tovran, who also took gold in the IPDA debate division at the Cool-Off, goes even further. “I think speech and debate can be related to any aspect in life, because arguing points will be important in any field I want to go into.”

Leila previously studied at Columbia University and will return there this fall. She wants to pursue degrees in physics and philosophy — both of which, like speech and debate, depend on logical patterns, she notes.

The students on the team come from a variety of majors—and from diverse places around the globe. Alumna Ilona Gerbakhar, who emigrated from Russia with her family, won two national medals for the SMC team during 2007-2009, and served as co-captain and later as a volunteer coach after transferring to UCLA. Describing herself as a “nerdy person who got picked on a lot in high school,” she found the college and the team to be supportive oases.

Ilona went on to earn a full-ride presidential scholarship to Harvard and is now a second-year PhD candidate at Columbia University, studying religion. Of her time on the SMC team, she says: “It was the defining experience of my young adulthood, and I am where I am because of debate. Everything good that’s come out of my life can be traced to those years.”

Matt Linsky — who, like Leila, is transferring to Columbia this fall — says of his admission to that prestigious university, “I could not have done it without debate. It gave me the extra edge.” He joined the team after taking coach Luis’s argumentation class. “I loved him as a teacher and thought, ‘This seems like a really good thing to try.'”

Matt’s victories for the team include winning, with best friend Ben Kolodny — who he met on the team — first place in the British Parliamentary debate division at the 2016 PSCFA Fall Championships. He also won first place against a field of 42 competitors in the impromptu category.

Ben has competed in 10 tourneys so far during his time at SMC. The biggest one took the team to Washington, D.C., for the Phi Rho Pi Nationals Tournament. Considered the Super Bowl of community college speech and debate, the April event featured teams from more than 60 two-year colleges. The SMC team won eight awards in six events.

The Team that Could

Prizes from Nate’s early years coaching the team dominate an awards case in the Letters and Sciences building because space is too tight to exhibit all the honors the team has since garnered. “We’re a high-performing team, and do it on very few resources,” he says. Nate’s dream is to build an endowment to ensure the team’s long-term sustainability.

While limited resources may keep the team from traveling to as many tournaments as their competitors from four-year universities, they excel in those they attend. The team hopes to someday also have a dedicated training space, but in the meantime, camaraderie abounds.

“We have a nice sense of community on the team,” Brianna says. “The students are really great at taking care of each other and supporting each other.”

Student Albert Cueva, who earned a silver medal at the Cool-Off, likens speech and debate to his previous experiences in playing football. “You all come together, and it’s like you’re more than friends — you’re family,” he says.

“I was just trying to find a place where I fit in at college,” says Albert, when Nate gave him a flyer for the team. In addition to the close friendships he has formed, he also feels speech and debate are giving him a leg up on his future. “I want to be a teacher,” he says, “so this gives me more confidence to talk in front of groups of people.”

Speech and debate are also like playing football in another way, according to Garrett Parker, who was a finalist in extemporaneous speaking at the Cool-Off. “It’s like mental athletics,” he says. “It keeps you in really good intellectual shape and forces you to pay attention to what’s going on in the world.”

The career of alumnus Russell Wald, who was part of the 2006-2007 team, bears that out. He now heads government relations on national security and cyber policy for Stanford University’s Hoover Institution in Washington, D.C. While he says being on the team provides “a great opportunity to learn more about current affairs and certain issues,” a greater value comes from forcing students “to put yourself out there in front of people and defend your ideas.”

Russell, who transferred to UCLA to complete his degree, says that forthrightness comes in handy every day as he engages “in a bipartisan way with people on Capitol Hill, in the White House and at the Department of Defense.”

Speech and debate also taught him to distill complicated ideas into easily understandable digests — a core skill of his job, as he shares the findings of Hoover Fellows with policymakers.

“It’s important for people to support this program,” Russell says of SMC’s Speech and Debate team. “It unlocks so many doors.” For Russell, the initial entryway to his current career was an internship with the Los Angeles World Affairs Council. “I found that by being inspired by debate, which then led to other doorways.”

Ilona says she definitely plans to keep supporting SMC’s Speech and Debate team, because she wants the coaches to continue being able to inspire and mentor students. “My own academic journey led from SMC to Harvard,” she says, “and there will be more stories like mine as the team continues, because such possibilities are what debate opens up.”