Maritza Lopez: One Dream at a Time 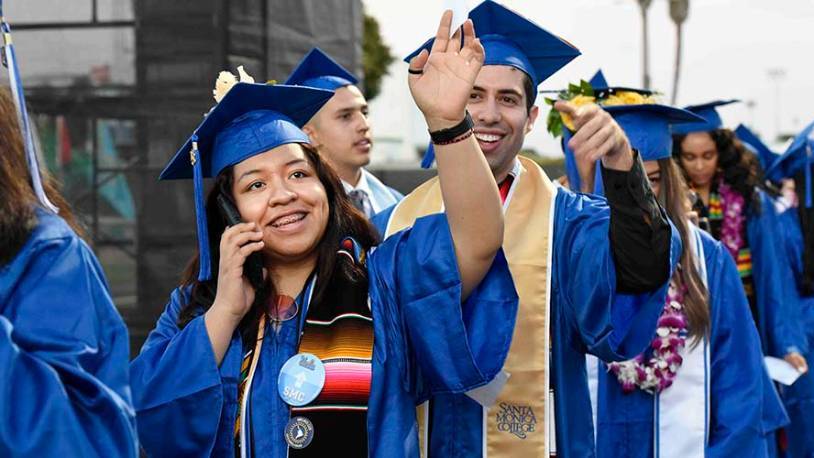 Maritza Lopez—Santa Monica College Art History graduate and soon-to-be UCLA student—remembers the time her father was hired to paint flowers on a blimp. Sometimes Maritza and her siblings helped, but mostly they slept in the car, waiting for him to finish. That was a defining time—one that sparked Maritza’s love for art, a passion she would pursue in the face of the greatest adversity.

Maritza wants to curate a museum someday or teach Latin American art history. When she first began applying to colleges as a first generation college student, she had not even heard of UCLA. “It’s hard to explain to them what it is…UCLA,” says Maritza, speaking of her parents. In high school, when she got awards in art class, her family asked if that would help pay rent, or feed her. When Maritza’s father, an electrician, lost his job, the family of seven faced a dire financial situation. They were evicted from their apartment, and have been spending the past few years couch-surfing, living with “family after family,” says Maritza.

After graduating from Ramon C. Cortines School of Visual and Performing Arts in Los Angeles, Maritza took a few classes at a local community college, but decided to attend SMC—long commute notwithstanding—because she wanted to be somewhere far from home, to meet new people. She would wake up at 4 a.m. most days so she could be on campus by 7 a.m., and she spent her evenings studying in the SMC library until it closed.

So when she was able to get into Students for Students—the first shelter in the nation to exclusively serve homeless college students and run by UCLA students at Mt. Olive Lutheran Church, a few blocks from SMC’s main campus—it made a huge difference.

“I’ve been able to get a good, six-hour’s sleep,” Maritza says.

How did Maritza do it—manage to improve upon the 1.0 GPA she began with, and transfer to her dream school—in the face of so many odds?

Breaking Out of Any Box

Maritza was aware, from a young age, of stereotypes and discrimination—the boxes within which people wanted her to remain. She often helped her mother, a housekeeper, clean houses. Once, a homeowner told Maritza’s mother, “You should feel happy that you have this job … go take a class and learn better English.” At that memory, Maritza’s eyes fill with tears. Then there was the client who insisted on talking to Maritza in Spanish even though Maritza spoke English back to her: “to practice.”

“I was just tired,” says Maritza, “of [feeling that] we are stuck in a cycle … being homeless, not able to get a degree.” So, even though she often felt alone and unsupported by her family in her academic pursuits, she did not give up.

At SMC, she found the best way to cope: Maritza surrounded herself with people and got involved. In the beginning it was a way to get her mind off the circumstances at home.

“Home is home. Work is work,” is how Maritza describes her approach to staying and thriving in school. A friend recommended “The Alchemist,” the novel by Brazilian author Paulo Coelho, and Maritza says that she had an epiphany while reading it. “I thought, ‘People are so afraid to lose their dreams, because they feel like once they reach it, what else do they have left?’ ”

“If you think of tomorrow … five, ten years, it’s going to stress you out,” says Maritza. “I say, ‘go with the flow.’ We learn something every day.” She also told herself that if she didn’t “work [her] butt off,” she was not going to get there.

Then there were people who inspired her, as Maritza put it, to know that she can be there one day. People like SMC counselor Dr. Paul Jimenez who went to UCLA and got an Ed.D. (he was undocumented). Nate Donahue, the Art History professor whose passion for Latin American art history convinced Maritza to switch majors from studio art to Art History. Or History professor Marisol Moreno who “never made anyone feel stupid.”

It did not take long for Maritza to become a familiar face around campus. She became Communications Officer for the Inter-Club Council—the governing body for SMC’s 90+ student clubs—and also a student worker at the Adelante Program /African American Collegiate Center, greeting new students and parents and “getting them hyped up,” as she puts it, about college.

She also gave of her time and abilities beyond SMC. Maritza worked for the Special Olympics, the Children’s Institute, the YMCA, and Stair Climb US Bank. Dr. Nancy Grass, SMC’s Associate Dean of Student Life, called Maritza “a model for selfless leadership.”

“She is blessed with the insight to not wallow in self-pity or self-doubt,” wrote Dr. Grass, “but to see the gifts she has been afforded in her quick mind, her sharp wit, and her wellspring of love for humanity.” Dr. Grass noted that Maritza had the ability to be “respectful and thoughtful,” while also being able to “speak up and speak out.”

In the classroom, Professor Moreno observed how well Maritza got along with other students, and also noted her deep interest in topics related to structural inequalities in history.

Maritza demonstrated that her interests went deep: she became an advocate for equity and social justice at SMC, becoming a strong ally and supporter of the I.D.E.A.S. club, connecting interested students with club leaders and supporting the rights of undocumented students.

A World of No Limits

The most interesting thing about being at Santa Monica College, says Maritza, was meeting new people.

“I learned a lot when I joined the ICC (Inter-Club Council) team,” says Maritza. She worked with two other women. “One is from Turkey. The other was Persian.” There was a little culture shock, and then the best part: “I get to hear their stories, about their countries,” says Maritza. “And I tell them stuff about myself—and they’re so interested.”

Maritza says she finds it “invigorating” to be in an environment where there are people who have opposing viewpoints or beliefs. “I don’t think you should stop someone who’s saying something you don’t like,” says Maritza, “because if you destroy what they’re saying, you’re stooping down to their level … so yes, I just listen to people around Santa Monica.”

Maritza’s advice for other students comes from personal experience: “Surround yourself with other people. Get involved.” When she was around other people at Santa Monica College, Maritza says she felt that life is “still moving.”

About her future, Maritza is cautiously optimistic. She is thrilled that she got into UCLA, of course, but she quotes a favorite proverb in Spanish: “El que se ríe último se ríe mejor,” which is roughly translated in English as “Whoever laughs last, laughs better.”

In other words, she wants to celebrate when she has finished school, when she has achieved her goal. But, considering how far she’s come, taking it—in her own words—“one day at a time,” Maritza Lopez has everything it takes to conquer her aspirations, one dream at a time. We are rooting for her at Santa Monica College.