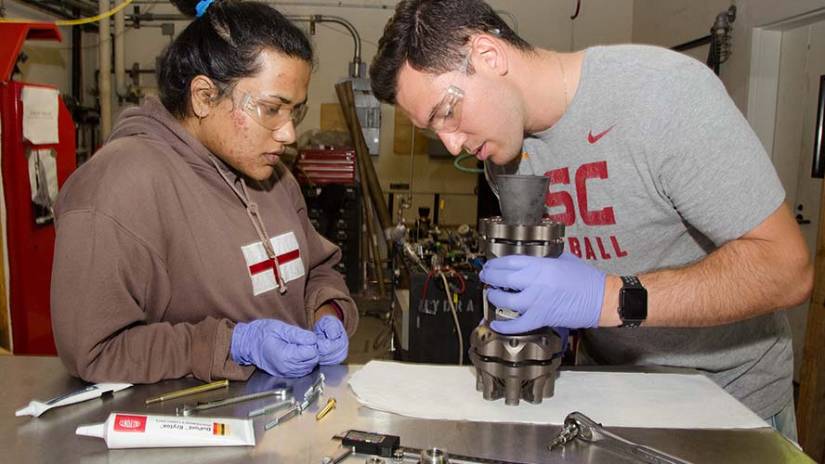 Maria Hernandez wouldn’t take no for an answer. She knew bone-deep that engineering was her destiny, so when she hit a wall in math, she didn’t back off.

Never once did Maria consider quitting her aerospace engineering major. “Honestly that didn’t cross my mind,” says the resilient Corsair from East Los Angeles. “My mom raised me to never expect anything to come easily. I knew that STEM was meant for me. I just kept going.” Today, Maria is a math tutor at SMC’s Adelante Program. A member of the Scholar’s Program, she recently aced Calc 3 and pulled a very respectable B in differential equations, dispatching two advanced math courses in a single semester.

For as long as she can remember, Maria has dreamed of working for NASA, Northrop Grumman, Boeing or SpaceX. Like her older brother Juan Hernandez ’10, who transferred to UCLA from SMC and just earned his NYU law degree, Maria hopes to continue her education at a top university, maybe even an Ivy.

Both goals are within her reach.

That couldn’t have happened without SMC’s STEM Science and Research Initiative.

The program is an academic support hub for traditionally underrepresented students interested in science, technology, engineering or math careers. Admission is by application, but the requirements aren’t terribly steep: it only takes a 2.5 high school GPA, two years of high school science, and math-readiness at the intermediate algebra level to qualify.

Maria is currently on her third, arranged through Base 11. The nonprofit workforce development company partners with top community colleges like SMC to feed the thirsty STEM workforce pipeline.

In her first placement at UC Irvine, Maria independently designed a face recognition system using the single-board computer system, Raspberry Pi. Her second internship was a 10-week summer residential program through UC Irvine’s Autonomous Systems Engineering Academy. She and her lab partner, a student from Skyline College, designed, fabricated and flew a semi-autonomous quad copter that they’d built from scratch on the open-source Arduino platform. Her third internship—working in the flow mechanics lab of Caltech aeronautics professor Beverley McKeon—begins in June.

These experiences have been so transformative that Maria is now a self-appointed Base 11 intern recruiter at SMC.

It was Maria who recruited her friend and fellow SMC STEM student Tehreem Raza.

A mechanical engineering major, Tehreem spent last year as a Base 11 intern in the Liquid Propulsion Laboratory of USC’s Viterbi School of Engineering. The grad-student-run lab focuses on designing and optimizing new types of liquid rocket engines. After some intensive lab training, their supervisors wasted no time putting the community college students to good use.

“They completely remodeled our Hydra test-stand project in CAD software, which was much needed,” says Mike Moruzzi, one of two USC grad students overseeing the lab’s three interns. The test-stand is used to take precise measurements of temperatures, forces, thrust and pressure during ground-based rocket test-firings.

Next, Tehreem and her teammates built a new oxygen manifold for Hydra. “That was crucial to our first successful static-firing of a rocket engine in December,” says Moruzzi. “We couldn’t have done it without the systems the Base 11 students built.”

In the spring, the interns modified the entire test-stand, splitting the oxygen, pressure and fuel lines so two rockets engines could be test-fired simultaneously.

Like Maria, Tehreem had taken full advantage of the STEM program. She particularly appreciated the textbook lending program, which saved her hundreds of dollars.

She first discovered the STEM program in her second semester at SMC, and it changed her life.

“I practically live in STEM,” she says. “I park my car, arrive at Drescher Hall at 8 am, and I’m here every day,” she says.

She wears many hats there, working both as a STEM tutor and an SI leader. But it’s in her role as a peer mentor where Tehreem thinks she makes the biggest difference. This relatively new program offers sympathy and sound advice to rookies whose commitment to difficult STEM majors may go wobbly under pressure. Everything from balancing hard classes to coping with math anxiety to handling failure … peer mentors have been there, done that.

Students like Tehreem and Maria are invaluable role models, according to STEM program director Melanie Bocanegra. They’re living proof that hard work pays off and that STEM majors can be accessible to anyone, given the right support structure.

Hurtling into Aerospace at High Velocity

Both of the young women maintain punishing workloads and study schedules.

Maria lives with her family in East Los Angeles. To beat rush-hour traffic, she leaves home every morning at 5 am and sleeps in her car until her first class begins. She stays on campus until the library closes at 10 pm. On Saturday, she drives to Fresno to work all day in the family’s small retail shop. Her year-round internship at UC Irvine further taxed her schedule and added many miles to her commute. But she persevered, learned and thrived.

Tehreem lives with her aunt in the Palms neighborhood, so getting to SMC isn’t a problem. Even so, she has very little free time. In her final semester as a Corsair, she is carrying a full load of science courses: physics, chemistry, biology and astronomy. She also clocks 20 hours a week in her various jobs at STEM. Her Base 11 internship—which she calls “the best experience of my life so far”—takes Tehreem to USC three days a week, including Saturdays.

Asked how she manages it all, Tehreem answers nonchalantly: “Oh, I’m used to it now.”

The child of Pakistani doctors based in Saudi Arabia, she came to the United States alone as an international student in 2015. Her older brother is an engineer in New York, and Tehreem was determined to follow suite. Looking back, she knows things could have turned out very differently.

“The STEM program does help a lot,” she says. “The kinds of classes and professors I’ve been able to take, the priority enrollment that I get, if I didn’t have that …” she trails off. “I have international friends who couldn’t get into the STEM program, and they ended up dropping classes. It didn’t work out.”

In June, she will transfer to a four-year college—most likely to Cal State Long Beach, because she wants to stay local, but she was also admitted at UC San Diego, UC Davis, and UC Riverside. Eventually she hopes to continue on to grad school at USC Viterbi.

But before that, Tehreem has one more internship lined up through SMC STEM.

This summer, she and Maria will both be Base 11 interns at Caltech. While Maria works on boundary layer manipulation under Professor McKoen, Tehreem will working be in the lab of aeronautics and bio-inspired engineering professor Morteza Gharib, a leading researcher on fluid dynamics and aquatic breathing.

The difficulty level will be ratcheted up considerably for both young women. These internships have them not only working under the direct supervision of top research faculty at one of the world’s best engineering schools. They have them fully integrated with interns who are current Caltech undergraduates, among the nation’s brightest.

They’ve already proven they can achieve whatever they set their sights on.