She Traveled, She Saw, She Learned: Michele Harrison 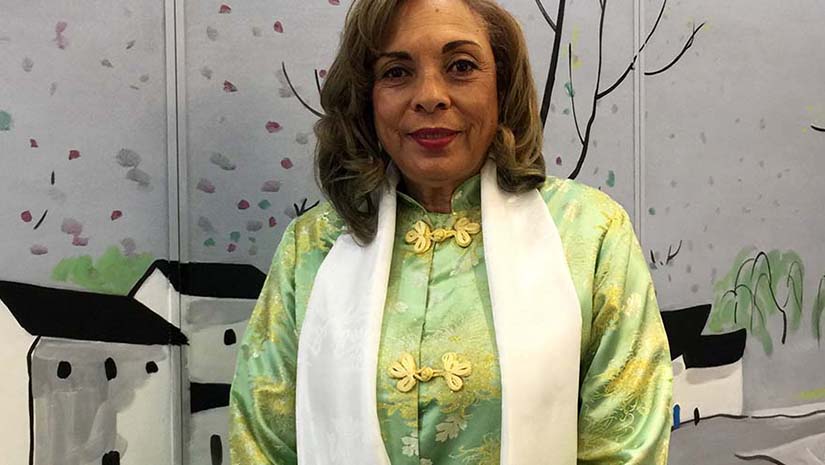 “One must travel to learn”, so goes the famous quote attributed to Mark Twain. And although Michele Harrison, an administrative assistant in Santa Monica College’s Office of Student Life, set out to teach English to Chinese schoolchildren because she “wanted to do something different,” it was she who returned the wiser.

Having been raised in a multicultural household in Los Angeles—her father was from Texas, her mother from Jamaica—Michele had always been curious about the world beyond. Her uncles were in the military, and the gifts and postcards they would send lit in her a fire for travel. When she graduated from the University of Washington with a Bachelor’s Degree in Political Science, Michele became a flight attendant with the Flying Tiger Line—also known as “Flying Tigers”—which was a major military charter operator.

Flying Tigers flew military personnel all over the world, and so Michele traveled to Saudi Arabia, Okinawa, the Philippines, Nigeria, you name it. In the late 80s, FedEx bought the airline and subsequently Michele was on the lookout for a new job. She wanted “something international.” When she took some computer and photography classes at Santa Monica College, she knew this place was it. That, in short, was how she came to work at SMC. And her job was exactly what she wanted: working in an office where she coordinates upwards of 60 student clubs at one of the most diverse and global college campuses in the nation.

Time for Something Different

Michele’s only son, Tourѐ Egan, went to college but found that it was not his thing. His mother said: “Go out and see the world.” Tourѐ, who is in his mid-thirties, applied for a job teaching in China through the University of Connecticut, and ended up living there for four years.

Then it was 2018; Michele turned 66. She wanted to do something different and Toure’s new life inspired her. She told her son she wanted to go and teach English in China. At first, he tried to dissuade her. “Mom, you’re too old.” But during Michele’s visit in Beijing— Tourѐ obliged her with visits to everything on her wish list: The Great Wall, The Temple of Heaven, the Forbidden City, the Terra Cotta Warriors—she met her son’s friend, who was also a recruiter of teachers. Michele “happened to mention” that she would like to teach English, and this man said, “I have a perfect school for you in the country.”

Tourѐ, ever protective of his mother, thought that wouldn’t do. But Michele was adamant—and as it turned out, “the country” was a city of almost 2 million: Yinchuan, the capital of the Ningxia Hui Autonomous Region in China. Her SMC supervisors approved her leave of absence and in September 2018, Michele set out for nine months of teaching English at Yinchuan No. 6 Middle School.

Michele never guessed that she would use vocal exercises she’d learned in theater class to teach English to Chinese schoolchildren. But that’s exactly what happened. Her regular class consisted of tenth graders, and she also taught eighth and ninth graders.

“They were very fascinated because they had never heard anyone really speak English,” Michele says. “They go to the movies, and watch Americans there, but they had never articulated the words. So I had to be really innovative.” She taught them how to sing “Let it Be” from the Disney movie Frozen. She walked them through vocal exercises that got them to open their mouths a little wider than they were used to. She used a lot of Marvel characters in her lessons, using the familiar to bridge the gap to the unknown.

Michele was deeply impressed by her students—and they reminded her of those back at home in Santa Monica. “The students were so well-mannered, well-dressed . . . they have to clean their school, sweep up leaves and so on,” she says, “even here [at Santa Monica College] there are Chinese students who will say, ‘Oh, Michele, the lobby is a mess. Let me help you clean it up.’”

This adventure in 2018-19 led to Michele checking two things off the bucket list: going to China, and teaching. She made friends, too. One girlfriend took her to the temples and museums, took her shopping. And when she was alone, Michele discovered that somehow, it was possible to communicate without words. A translator app came in handy, and when that failed, there was always sign language.

She remembers a “tea lady”, who somehow managed to understand Michele’s condition—a headache, say—and prescribe her the very tea she’d need to dispel the malady despite not speaking a common language.

A Hunger for Learning

Much to her surprise, Michele found that her students would much rather learn English than do their homework. In fact, they would say, “We need a break, teach us English.” She set up a Poetry Corner/English Corner; they would pick various subjects—specifically Chinese culture-related or festivals such as the Chinese New Year—and research how people across the world also partake in these.

On Saturdays, students would visit Michele in her apartment to visit, practice English, and eat lunch. “I introduced them to salads and they taught me how to stir fry!” she says, also noting that the food in China was “outstanding.”

But it wasn’t all work either. Michele found time to relax, and set out on some adventures of her own. A special highlight was a visit to the mountains of northern Shanxi province, where Mao Zedong hid his Red Army. A friend whom she calls “Mr. Leo” took her to a visit to the area, and told Michele she was the first American to visit that area. They were farmers, and some of his family tended the graves on the hillside. She took a hike, and found that she was a little afraid of heights “because we had to walk on ledges and there would be drops on either side!”.

Mr. Leo said to Michele: “We will never go to America, but America has come to me to have lunch and I am honored.”

When Michele first got to Yinchuan, it was a holiday. One of her students invited her to come visit her mom, who was a doctor of acupuncture. The host said something Michele did not expect. “I think you’re an excellent ambassador for your country.”

“That’s what happens when you leave,” says Michele. “You become the ambassador for your country—you become the spokesperson for Americans.”

She began to feel the full weight of being an ambassador. “Every morning, I would look at the news [on US-China relations] to see if I’m going to be embarrassed when I go to work!” Michele says. Not surprisingly, she found that any negativity in the media—the trade war, and so on—did not affect her relationships with her new friends or vice versa.

Michele returned from her adventure with a treasury of memories and a renewed sense of wanderlust. She says one can go anywhere – without even knowing the language. “You can learn a lot from books,” she says, “but you gain wisdom through experience. So you’ve got to see it, smell it, touch it . . . hear the music, see the opera, taste the beer. I even ate bugs!”

Dr. Isaac A. Rodriguez Lupercio, SMC’s Associate Dean of Student Life, who supervises Michele, affirmed her role as a global citizen/ambassador at the college. “Whether it is working with student clubs or supporting our front desk operations, Michele infuses an inclusive outlook,” Isaac said. “She does her best to connect with our students, and shares her life experiences.  She constantly strives to understand students’ backgrounds, traditions, and culture.”

As for Michele, she keeps in touch with her students in Yinchuan, and hopes that one or more will make their way to Santa Monica College someday.