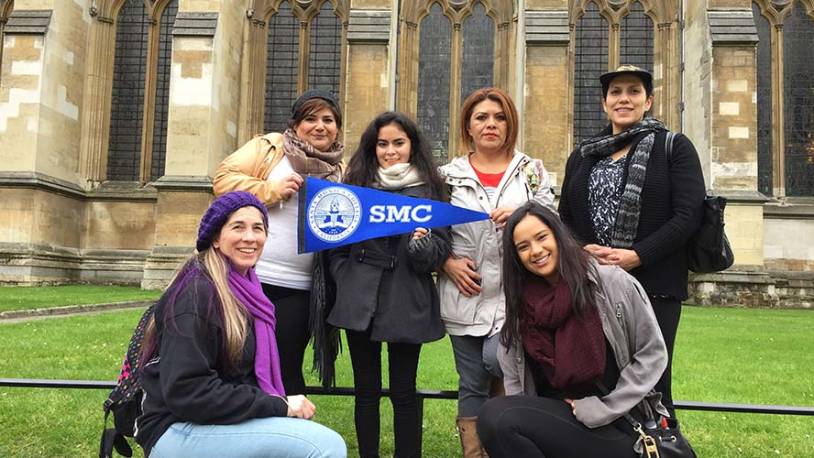 "This royal throne of kings, this sceptred isle…This blessed plot, this earth, this realm, this England." (William Shakespeare, Richard II)

Once upon a time, there were 22 Corsairs. They sailed—nay, flew!—across the Atlantic Ocean to England on a merry mission from Santa Monica College in the spring of the year 2016 (in the meanwhile, some Corsairs set forth for South Korea, but that's another story.).

This mighty institution, let's call it "SMC" (for this tale is very, very long) was home to Corsairs from Everywhere. And when we say "Everywhere", we really mean Everywhere—including the fair kingdoms of Santa Monica, Malibu, Los Angeles, Orange County, and far-off kingdoms like Sweden, China, Turkey, Iran…you get the idea.

But while they studied many things at SMC, these Corsairs began to see a world beyond their own. This did not just mean a voyage across a gigantic pond to see the land of Shakespeare, Monty Python, and fish n' chips—it meant that these 22 Corsairs learnt about a fine SMC tradition called Global Citizenship. That may sound like gobbledygook, but what it really means is that this SMC transforms Corsairs into citizens of the world: after all, how can we survive without knowing that the only thing that really divides us from other worlds is a plane ride, a voyage, a night's sleep?

Sandra Sotelo is a Theatre Arts Major at Santa Monica College. She calls LA's Koreatown home. This is her first time in England. Today at the Royal Academy of Dramatic Arts—better known as RADA—Sandra (and her fellow Corsairs) participated in a workshop with Shakespearean actor Gary Langdon. She read out lines from Winter's Tale in a room where scores of eminent actors had trained for hundreds of years.

"Theatre is my passion, and I want to pursue it my whole life," says Sandra. "To get called out to read, and to get over my nervousness, it was scary-exciting!" When asked to describe England in one word, Sandra responded, without missing a beat: "Heart-pounding."

"Writing in my journal today, I asked myself why I am here," says Sandra. "I wanted to be here because I wanted theatre to be in my soul. I want it to be in my pores and just pour out of me." – April 9, 2016.

Xochitl Nisbet: For Whom The Road Never Ends

Xochitl "Xochi" Nisbet became a mother in her twenties and had to give up college to focus on supporting her family. After working for 15 years as a database administrator for nonprofits, Xochi began taking classes at Santa Monica College as a "returning student."

"I might be the most eclectic SMC student," declares Xochi, "I mean in terms of the classes I've taken here." Her choices are eclectic indeed. Computer, voice, piano, musical theatre—Xochi began exploring old loves and stumbled upon new passions. For instance, she had always loved to sing and play the piano as a child. So, she enrolled in piano and voice classes at SMC, to revive her long-lost talent.

Another long-ago dream would also come true at SMC. Xochi had always wanted to study abroad, but as a mother of young children, the opportunity had always "passed [me] by." But SMC's ten-day Global Studies field trip to England provided her the perfect opportunity.

She thoroughly enjoyed the experience, especially the plays she saw, from Shakespeare to Eugene O'Neill, in settings like the historic Old Vic in Bristol to the Royal Shakespeare Company in Stratford-upon-Avon. Xochi took part in workshops with RADA and Bath Spa University drama faculty. And her study abroad experience culminated in watching RSC's production of Hamlet, a refreshing and brilliant take on the old tragedy.

"Everything has been so valuable for me—the workshops, the conversations I've had with professors, the plays we've seen—and I will be incorporating all of it into my own acting," says Xochi.

Xochi says she "accidentally" took the musical theatre class at SMC, because she did not realize it would culminate in a workshop experience. But it gets even better: some of her SMC friends talked Xochi into auditioning for the summer SMC Theatre Arts musical Man of La Mancha. And, Xochi was selected to play the innkeeper's wife! – April 20, 2016.

Madeline Yagle talked about how much she loved musical theatre as she headed to Bristol. She couldn't help raving about her favorite musical Phantom of the Opera and reminisced about what it was like to see it in London years ago.

"I remember seeing the audience, people who had seen it, like a million times, and people who were seeing it for the very first time," said Madeline. "And people from so many countries. I remember thinking that with art you can touch all these people in different ways!"

In Bristol, Madeline watched Eugene O'Neill's play Long Day's Journey into Night, and before they stepped into the historic Bristol Old Vic, Madeline did not know who else was going to be in the play (other than Jeremy Irons as the father).

Life has a way of coming full circle for Madeline. Because Hadley Fraser—whom Madeline had seen years ago in Phantom of the Opera in the role of Viscount Raoul de Chagny—was also in Long Day's Journey into Night. "A pleasant surprise" may be an understatement to describe Madeline's reaction!

Safe to say, Santa Monica College has allowed Madeline to explore new things—and discover some old passions along the way. At SMC, Madeline is a Communications major but is taking musical theatre classes as well. She's always loved theatre and went to acting camps as a child but it was watching Phantom of the Opera that made her decide to take musical theatre classes.

"I decided: if I like it so much, why not just give it a go?" said Madeline, about her decision to minor in musical theatre. "You never know until you try."

She sees the thread in all her passions: her love for interacting with other human beings. "That's the connection between all the things I love," says Madeline. Her passion for life is such that she finds it "sad that [I] have to focus on just one thing."

"I like how many different classes there are at SMC," says Madeline. "When I thought of community colleges, I used to think it was ‘small', but SMC is not that way at all. People tell me about all these classes they're in, and I'm like, ‘I never heard of that, did you just make that up?'"

Madeline hopes to transfer to a university in England, specifically, Bath Spa University where she had the opportunity to take drama classes this week. – April 15, 2016.

Michael Chong has a YouTube channel on which he posts short films—his passion is filmmaking—and there's one on his life in Los Angeles. It highlights the house he shares with several roommates in West LA, his house-duty (tending the garden), the campus at Santa Monica College, the SMC library—where he spends a few hours daily—and his dream university, UCLA.

Michael is an international student at SMC, from Hong Kong. The reason why he picked SMC might sound just a tad familiar. "I came to SMC because it is a positive pathway to get to UCLA."

He plans on majoring in Applied Math, and then to transfer to UCLA to major in Actuarial Mathematics and minor in…yes, film! He admits that while he really loves film, he wants a fail-safe Plan B.

This is Michael's second time in London. But this is different in a few ways: first, he's been to several plays (including Shakespeare's Winter's Tale at the Sam Wanamaker Playhouse on the site of the original Globe and Agatha Christie's The Mousetrap at St. Martin's Theatre on West End). While he admits that he isn't "into" theatre—as a short film aficionado, he finds them too "long"—he now has a newfound appreciation for the preparation that goes into a play (this morning, Michael and his SMC counterparts went to a workshop with British actor Eunice Roberts, who is in The Mousetrap). Michael also enjoyed thinking of how he would adapt the plays he watched into films.

Also, while he loves travel, it is always hard to figure out what to do, so to have activities and a structured schedule—as SMC has done for him—is a major plus.

His favorite thing to do in London? "I like walking around and seeing the buildings, it reminds me of home, of Hong Kong."

His favorite thing about SMC? "That I have a goal and the chance and motivation to pursue it to make my dream come true." –April 11, 2016.

Kishore Athreya: A Line of His Own

Kishore Athreya's zest for life is visible in many ways. He is an English and pre-med (yes, you read that right) major at Santa Monica College, interns at Cedars-Sinai's neurology department, and is Director of Publicity for SMC's Associated Students (Kishore has since transferred to the UC Riverside School of Medicine).

Born in Chennai, India, Kishore moved to the U.S. with his family and has lived in several states, Hawaii and Minnesota included. At SMC, he began as a Biology major, but when he took an English 2 class, he found it "exciting." Eventually, he decided to focus on pre-med (he hopes to do research in neurology and cardiology) but, he says, "English will always be my passion."

Kishore believes in a balance between the sciences/STEM and the humanities.

"SMC English Professor (Lawrence) Driscoll and I were talking once about how various eras have resonating ideas, how some remain and make its way into a different era," he says. "Science and STEM are like our next era of exploration. But we lose a part of our culture when we are not in touch with the humanities."

On this global field studies course to England, Kishore's appreciation for the humanities has expanded. He and his SMC counterparts have been working with a Drama professor from Bath Spa University as well as SMC Theatre Arts professor Perviz Sawoski and English professor Gordon Dossett on Shakespeare's Hamlet.

"I enjoyed the Hamlet workshop a lot," says Kishore. "I think people misunderstand that creative arts are not structured…they require a great deal of discipline, a set of guidelines just like in the sciences. We focused on iambic pentameters…how we can replicate Shakespeare, how we can make one of his lines our own." – April 14, 2016.

[Santa Monica College approved a one-unit Global Field Studies course, which was launched this spring to complement its longstanding Study Abroad program. The ten-day field studies trip to England—as well as one to South Korea led by Korean language Professor Jihyeon Cha, also over spring break—was the new course's maiden voyage. Several students received Global Citizenship scholarships from SMC to make the experience possible. SMC's Study Abroad trips this past year included one to Latin America in the summer and another to South Africa over the winter.]