Laura Zwicker: On Her Way to the Stars 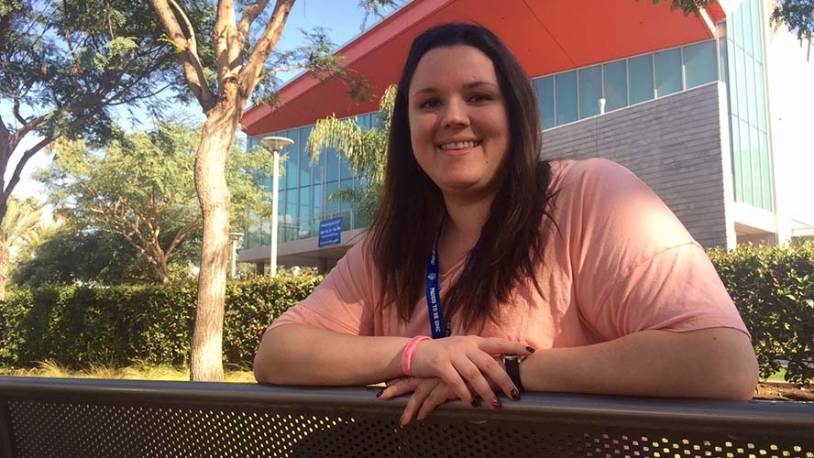 Laura Zwicker represents the students of Santa Monica College (SMC) on the college’s Board of Trustees. Along with Terrance Ware, Jr., Associated Students (AS) President and the AS Board, Laura has a weighty responsibility—that of making sure student interests are heard. In this official role, she is a familiar face around campus. Laura proudly wears a blue tag identifying her as student trustee and she is often accosted by new students.

"I love wearing this badge and I love it when people stop me for help; I’m like ‘yes, please ask me where the bathroom is!’” quips Laura. "I really just want to help.” Anyone who knows Laura—even only peripherally—knows the truth in this statement. And anyone who knows Laura’s story can only be in awe of her evolution, but mostly and vastly, of her resilience and strength.

A Reason to Wake Up

In 2011, Laura had been out of school for almost ten years (she had previously taken classes at Johns Hopkins University and Loyola University Maryland). She was also homeless, often without an address—living in halfway homes or treatment centers.

Her childhood was difficult, to say the least. "I had a lot to recover from—both family and health issues,” says Laura, "and I was just aimless for a while, not sure what I wanted to do or even if I wanted to keep going.”

So she decided to apply to Santa Monica College.

"I just wanted to have a reason to wake up in the morning, someplace to go, and people to interact with,” says Laura. Her first semester was trying. "I didn’t know anyone, I was struggling financially with housing…but I wanted to do something positive, I wanted a change.”

She made herself go to student club meetings even though she didn’t want to, and she felt afraid of speaking to others. "I usually sat in the back and pretended to text people…but I knew it would be good for me to have a sense of community so I kept going back,” remembers Laura. "I found everyone to be welcoming…and I grew to feel that I was part of a community who cared about and encouraged each other. That made a huge impact on me.”

In her childhood, two things served as an escape for Laura: fantasy and outer space. "I spent a lot of time in my head or with my imaginary friends as a child, living in another world,” she says, adding that she watched a lot of Star Trek and Star Wars, "I also always admired how much social commentary and criticism you can get away with in sci-fi.”

Laura wanted to write science fiction, so she signed up for creative writing. Then, when she saw that SMC also offered astronomy classes, she signed up for one "just to give myself some background.” Enter Astronomy professor Gary Fouts, whose passion for his discipline can only be inadequately described as…astronomical. Fouts also happened to be the faculty advisor for the student-run SMC Astronomy Club, which Laura joined.

Today, thanks to Professor Fouts, Laura is focused on two majors: creative writing and astrophysics. "I realized I was good at it,” she says. As part of the STEM Science Research Initiative at SMC, Laura has also been able to get some hands-on experience at NASA and JPL—including meeting with JPL scientists and engineers, and working on a research project with a JPL mentor—through two internships (the NASA Community College Aerospace Scholars program and the Student Independent Research Internship).

In her second semester as a member of the Astronomy Club, Laura decided to run for office and served as secretary, and eventually went on to become the club’s president. During the two years she was club president, she met many other student leaders, including former SMC student trustee Jonathan Eady. He "saw something in me,” says Laura, and "pushed me to get more involved, to step up to the plate.” The rest is history.

Louise Jaffe, Chair of the SMC Board of Trustees, calls Laura "exceptionally thoughtful.”

"Her practice of thinking deeply and fully considering issues leads to collaborative and effective solutions,” says Louise. "It is a pleasure and an honor for me to know her and to see her emergence as a respected student leader. She gives me hope for our country's collective future!”

Interim Associate Dean of Student Life Nancy Grass makes a similar observation and said that Laura "…is an extremely intelligent, dedicated and diligent student leader who strives to make a lasting and meaningful difference for the College and for all of our students.”

Laura attributes her passion for leadership on campus to those who made her feel welcome on campus (in addition to the Astronomy Club, Laura was also a member of both the Natural History Club and the Chemistry Club). "I wanted to create that feeling for other students, I want them to have a niche they can call their own,” says Laura. "More than anything else, serving other students to give them the opportunities I had—or even more—has been my driving force.”

The work of representing her fellow students has also been "personally challenging.”

"In just the few months I’ve been student trustee, I feel like I’ve had ten years’ worth of personal and professional development!” says Laura. "I like doing things that make me uncomfortable and push me beyond my limits…public service is definitely something I can see myself doing.”

So what is it like to be on the Board of Trustees? While Laura had definite goals based on her campaign, one of the things that helped her is being "open minded to learning.” A challenge in the very beginning, for a self-avowed "reserved person”, was learning to speak out.

"I don’t like to impose myself in conversations or speak up unless I know what I’m talking about,” says Laura. "So, at first, I was quiet, just getting a feel for the situation and looking for opportunities where I can be of assistance to students and to the college. That’s something that AS President Terrance, all of our AS board, and I have in common…we have heard from [fellow] students on things that they want to see on campus, but we also want to be of assistance to everyone working here. We want to be seen as colleagues…that we can be useful and part of the process.”

What was a surprise for Laura was how "political” the position can be. Along with Terrance, Laura attends many meetings and represents Associated Students on committees including the DPAC or "District Planning and Advisory Council”; they also sit on the DPAC budget planning subcommittee. She says they were not aware of everything that goes into running the college. "It’s just so fascinating,” says Laura, "to see how all these moving parts fit together.”

But what was the biggest surprise? "It’s easy to assume when you’re a student that no one’s listening or that no one cares,” says Laura. "But when I started going to the Board of Trustees meetings and interacted with SMC staff, I was blown away by how everyone was thinking about how to impact students—and I do think that’s important because we have more than 30,000 lives being impacted at SMC.”

Laura hopes to transfer and continue on to get a Ph.D. Her role as a student leader has been so gratifying that she is actually contemplating switching majors to Political Science. She just wants to "find ways to help people,” and there’s no doubt that life will give her plenty of opportunities to do just that.