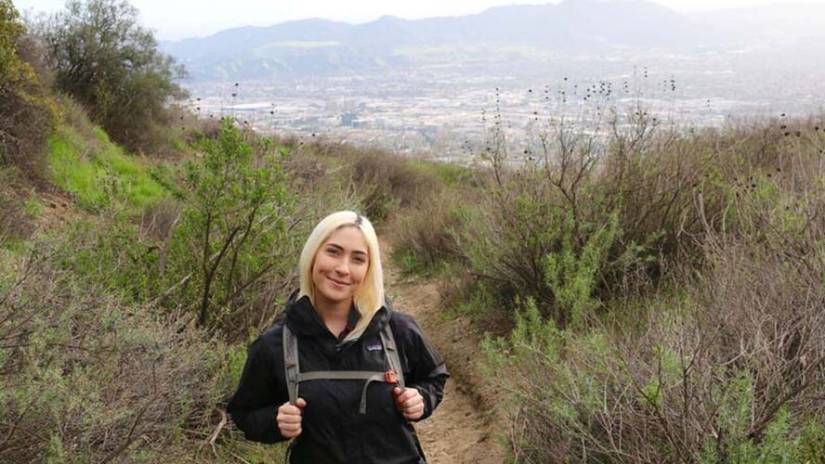 She recalls that “transcendent moment” very clearly. On one side of the enclosure, there were some people agitating the leopard, who was pacing back and forth, whipping its tail. That’s when it happened.

“It came towards me, stopped right in front of me,” says Korinna. “It looked me straight in the eye, and let out something like a deep ‘meow.’ It was one of those moments when I felt I had transcended everything—I saw myself in the snow leopard’s eyes, felt empathy for it.”

“This is funny,” she said, “but when Britney Spears came on the scene, I loved her and wanted to have something to do with the industry.” So Korinna had enrolled in the Options for Youth program and studied cosmetology at John Burroughs High School in her native Burbank. After her graduation, she found work as a hair and makeup stylist—which is what she was doing when she met the snow leopard.

Korinna was a first-generation college student. When she arrived at Santa Monica College, she struggled with having to support herself financially and navigate a whole new world. She worked full time while attempting to complete classes like Chemistry, Geometry, or Pre-calculus, all in the same semester. She drank too many ‘energy’ drinks a day, and studied into the early morning.

After a few false starts, Korinna found a subject she really loved and a university that offered a Bachelor’s degree in exactly what she wanted to do: Wildlife Management and Conservation Biology. She has been accepted as a transfer student at Humboldt State University, and will be transferring there this coming fall. But Korinna is not waiting until she’s gotten a degree to begin her work—the snow leopard has waited long enough.

It Begins in Her Backyard

Felix Ma, an SMC Life Sciences lab technician, encouraged Korinna to find an internship that would let her gain experience in what she wants to do. She spent months reaching out to organizations like the National Park Service—and nothing panned out. One day, Korinna’s brother Jeff asked her if she had been to the Stough Canyon Nature Center in Burbank.

“I just started talking to the director, and I asked what kind of research they did there,” remembers Korinna, “and she said they didn’t currently have funding for research—and that put a light bulb on in my head, because the Verdugo Mountains are an isolated habitat for pumas and other large carnivores.” The center—which serves as an “educational gateway to the Verdugo Mountains and the Rim of the Valley Trails”—became the beneficiary of Korinna’s indefatigable passion. Korinna has also been interning with the Mountain Lion Foundation over the past few months.

As part of her research at Stough Canyon, Korinna has been “estimating carnivore densities around the Stough Canyon Nature Center using noninvasive techniques such as camera traps,” she said. Carnivore densities? Camera traps? Korinna breaks it down: “I’m using a really high-resolution camera that uses no-glow infrared LED technology. When it is triggered at night, the infrared sensor goes off and captures an image—which most animals—like cougars, raccoons, coyotes—can’t see.”

Korinna’s blog reveals entries showing the animals that have wandered across her camera so far. On January 16, 2017, the blog title exclaims: “…You Won’t Believe What the Camera Captured!” “Meet the species Urocyon cinereoargenteus, also known as the Gray Fox.” Ten days later, on January 26, it’s “a beautiful bobcat.”

Korinna is using her research to observe the behavior of large carnivores, specifically how ambient temperature or ambient light affects their movement and activity. She writes, too, about the threat of rodenticides to bobcats.

“Korinna’s passion and dedication are so visible,” says Adrine Ovasapyan, Recreation Coordinator at the Stough Canyon Nature Center. “She’s always here checking on things, communicating with us on what she finds, sharing her footage.”

The center plans to share Korinna’s footage with visitors through monitors installed in the lobby.

Why is urban wildlife research and education so important?

“For so long, we’ve thought of nature as something separate from us—you know, like the rainforests in Brazil, or designated zones like Yellowstone or Yosemite,” says Korinna. “But it’s important to realize that nature is all around us. When you’re sitting on the 405 freeway listening to NPR, there’s probably a red-tailed or a raptor hawk gliding on the wind above you, looking for food.”

She pulls out her laptop and points out fragmented wildlife habitats in the Los Angeles area, one of the most diverse eco-systems in the world, filled with wild animals. The growth of cities has brought about these “fragmented habitats,” divided by urbanization: homes, freeways, other development. And the affected animals—such as Griffith Park’s mountain lion P22—have ventured out of their homes.

“P22 is the first puma known to cross both the 101 and the 405 freeways and live to tell the tale,” says Korinna, pointing out that his habitat is “the world’s smallest known habitat.” P22 was named by the Park Service, with “p” for “puma,” and the number designating that he is 22 out of 44 pumas they have studied. Korinna talks about P22 and P41—who lives in the Verdugo Mountains—as though they are her long-lost friends.

“P-22 is forever a bachelor, unless he decides to cross the 210 freeway into the San Gabriel Mountain Range—where there are diverse mountain lions. But if he does that, he could very likely die on the freeway,” says Korinna. A recent study of the mountain lions in the Santa Monica Mountains using information collected by the National Park Service showed that, with a lack of genetic diversity, the population faces the possibility of extinction over the next 50 years. Without such diversity, a situation called “inbreeding depression” can take effect and affect the ability of mountain lions to survive and reproduce.

“We need to plan our cities better,” says Korinna about the need for wildlife corridors, “We should make it part of our infrastructure for underpasses to be part of every freeway. We need to think about wildlife whenever we think about economic development.”

A Mentor Weighs In

SMC Life Science Professor Dr. Mary Bober met Korinna when she took her Biology 22 (Genetics and Molecular Biology) course. Korinna struggled with test-taking but, said Dr. Bober, “I didn’t notice it because she worked so hard, and not only did she understand the course content, she was often helping other students.”

Korinna’s enthusiasm was infectious. Dr. Bober will be her mentor for Spring 2017, as Korinna continues her research at Stough Canyon as part of an “independent studies” option that SMC offers, with transferable credit to a California State University campus.

“What I am finding so extremely impressive is the passion she has to be a wildlife conservationist, and the independence she has displayed against all odds to achieve this goal,” says Dr. Bober. “She is well on her way to achieving this goal, but equally remarkable is the self-direction that she has shown, becoming extremely active in the Mountain Lion Foundation. as well as building bridges with the Stough Canyon Nature Center.”

The professor visited Stough Canyon in January, bringing an additional camera for the research project. The visit—documented by Korinna on her blog—showed Dr. Bober that Korinna had developed important professional relationships with the wildlife biologists and directors at the center, and all through her own initiative.

“It can be daunting in the scientific community to develop worthy projects,” says Dr. Bober, “and it is a rare person who can create the network needed to realize these goals.” She points out that Korinna has already emailed some of the professors at Humboldt State, asking if she can get a head start on internships with them this summer.

Korinna hopes to obtain a Ph.D. in her field, and wants to be a field biologist (obviously). The options, as she sees it, are endless: “Later down the road, I may go to Africa, do savannah conservation, maybe work in the rainforests in Brazil, or Alaska—it’s really intriguing to me—or who knows? I may just stay here,” says Korinna. “And down the road, when I get old and can’t do fieldwork anymore, I can see myself being a teacher. I love to teach.”

Considering how much Korinna has accomplished on her own, and how much she taught this writer in an hour, all those possibilities are clearly visible on the horizon: as reality.

In addition to Korinna’s blog, you can follow her research on Instagram @korinnadomingo. The Stough Canyon Nature Center and Korinna are using the following hashtags for the project: #burbank #burbanknaturecenter #stoughcanyon #stoughcanyonnaturecenter #verdugomountains

Information about the SMC Life Sciences Department and its offerings is available here.