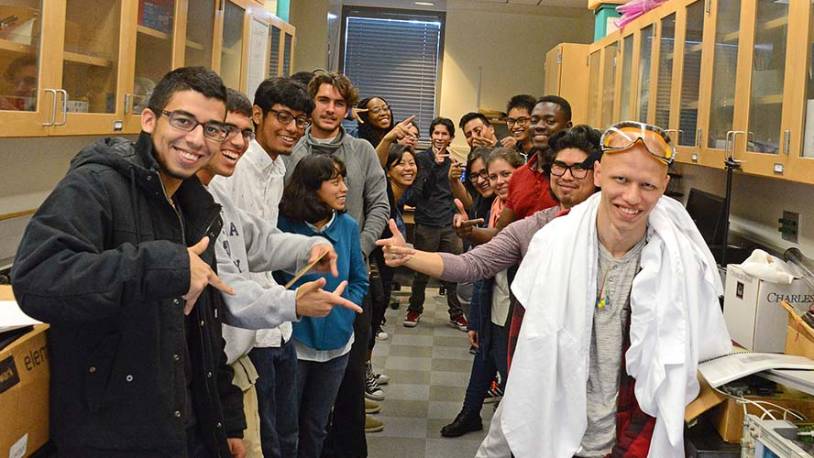 When Angel Mendoza entered Santa Monica College, he was unsure of the direction his education would take him. But with guidance from the SMC STEM Science and Research Initiative, he discovered an unexpected passion for engineering.

“Engineering opens doors to many kinds of projects,” the 23-year old student said. “I don’t want to spend my career sitting in a cubicle doing the same things over and over again. I want to work with my hands, so I’m taking classes to transfer to a four-year college as a mechanical engineering major in the fall.”

Thanks to a new five-year, $6 million grant from the U.S. Department of Education, students like Angel will now have the opportunity to take engineering classes at SMC, and summer engineering workshops are also being planned. Students can also look forward to a new Student Design Area—or a “makers space”—where they will build individual projects to get hands-on experience and advance their creative, practical, and professional skills.

Tram Dang, SMC Physics and Engineering Professor says that the majority of her STEM (Science, Technology, Engineering, Math) students have told her they want to go into engineering. But SMC lacked a formal engineering program—until now. “We offer a few classes related to engineering,” says Melanie Bocanegra, SMC Associate Dean of STEM and Equity Initiatives at SMC, “but not a formalized pathway. And that was the impetus behind applying for this grant.”

Professor Dang is now working on creating the curriculum for the Engineering program and designing the makers space. She’s already devised coursework for Engineering 1(Introduction to Engineering) to give students an overview of the many different specialties to choose from—electrical, mechanical, structural—and what they entail. And she’s also completed the syllabus for Engineering Graphics and Design, which includes software training in Computer Aided Design (CAD).

Both engineering courses will be offered in Spring 2017, and Electronic Circuit Analysis with a separate lab component will be introduced in Fall 2017. All of the courses are being designed to help students meet the standards typically required for transfer as an engineering major.

Building for the Future

In the Science Building, there is a small DIY engineering space with equipment for students who want to build independent projects. One group of students is trying to reverse engineer a drone. Another group, put together by Angel from students in Professor Dang’s Physics class, is researching how to design and build a small cube satellite to measure atmospheric glow.

This is exactly the kind of project Professor Dang wants to see in the new Student Design Area. “Engineering is an inherently collaborative field,” she says. “This will be a workspace where students can come and build things. SMC’s Art Department already has a laser cutter; when we add a 3-D printer, they’ll be able to create actual working models.” She also envisions working in tandem with SMC’s Fashion Design program and other departments to design functional objects that also look good, “like the FitBit or Apple Watch.”

This matches Angel’s goals. “I want to be able to help build instruments used in scientific research,” he says, “and the makers space will give me the hands-on experience to do that while I learn about different aspects of engineering.”

The focus of the $6 million grant is to increase the number of Latino/a, under-represented, and low income students in the STEM program, with an emphasis on engineering. “STEM majors are rigorous,” says Melanie Bocanegra, “but it’s important for students to know that it’s totally possible to do well.” To help them succeed, SMC’s STEM program offers counseling, priority enrollment, tutoring, and financial support.

Gabriella Dean, a 20-year-old, third-year student preparing to transfer in the Fall, hopes to design propulsion systems for rockets as a mechanical engineer. “SMC’s STEM Program helped me figure out what classes I needed and to find people to study with,” she says. “There’s a lot of mentorship here, and you can really build community. These classes can get pretty hard, and there are lots of late nights, so I like that there are people around who understand what I’m going through.”

Professor Dang agrees that STEM classes can be daunting, and says that one aim of the grant is to help expand experiential education. “At SMC, none of us believe that just because you don’t have math skills, you can’t be a STEM major,” she says. “There’s a lot of encouragement in this program, and we’re focusing on learning by application, rather than just lectures and tests.”

Many students working their way through the lower level math classes are now getting As, says Professor Dang, even if they started with Ds.

Melanie says that there are a lot of “STEM-adjacent” career opportunities in the marketplace now, especially in engineering. “Employers are not just looking for academic degrees. They want students who have the ability to work in teams, communicate with one another, and bring skill sets to the table. And we have a great community of students doing this in their everyday lives and getting trained in these areas.”

Professor Dang adds, “We don’t have people building circuits anymore because computers and robots do that, but we do need people to design, program, and maintain those computers and robots. And if we teach our students to do this well, we’ll be able to reach out to local tech companies for internships, and maybe even create a vocational program for engineering students.”

Aside from studying math and science, Professor Dang believes the most important lesson she can impart is that engineering takes perseverance. “When you design something, you’re almost always making iterations of an older design,” she says. “You’re never quite done, your design is going to slightly fail in some way, and you’ll have to fix it. Getting the message across that failing is part of succeeding is probably the hardest thing we need to teach our students.”

SMC’s STEM program has been a success and is now building on its prior achievements. In 2011, SMC received a $5.8 million Department of Education grant for the STEM Science and Research Initiative, which was established in partnership with UCLA. “It’s been incredible to see what we’ve already done,” says Melanie. “So much has branched out from that original grant, and we’ve used everything we learned in the first five years to apply to the next five.”

Professor Dang says that SMC has helped change a lot of students’ lives. “I always tell my students, ‘Dream big, you don’t know what you’re going to be able to do, and we’re here to support you.’”