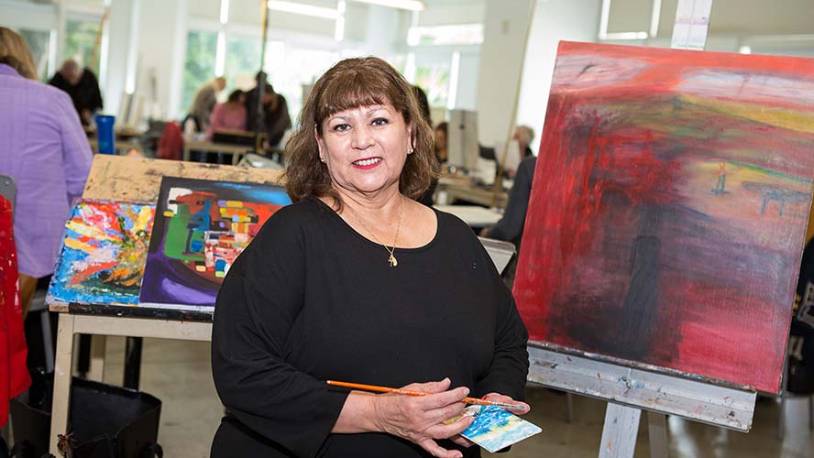 There’s an unusual hairdressing establishment tucked between 17th and 18th Streets on Ocean Park Boulevard in Santa Monica. Hair Brains is the brainchild of owner and Santa Monica College (SMC) Emeritus student Mercedes Garcia: evidence of two dreams come true. Original paintings by Mercedes in a range of genres — abstract, realism, impressionism — cover every possible space: by the shelf of hair-styling products; in the waxing room; overlooking the hairdressing stations.

As a child growing up in Puerto Vallarta, Mexico, Mercedes dreamed of being a hairdresser and an artist. Her mother and grandmother raised Mercedes and her siblings — eight of them in all — after her father passed away when she was 11. They “did not starve, but were not wealthy,” she says. She looked at the wealthy ladies driving around in their cars and said to her mom, “Someday, I want to drive a car.” When Mercedes’s aunt immigrated to the United States in the seventies, she offered to take her niece along.

“I fell in love with America,” says Mercedes. She attended Venice High School, followed by beauty school, and “never went back.” At 21, she became the co-owner of a hairdressing salon in downtown Santa Monica. Three years later, the landlord decided to sell the building, and Garcia spent a few years at another salon. She wanted to buy her own beauty shop, and take the risk of success or failure upon herself. In 1990, she found the location at 1718 Ocean Park Boulevard, and opened Hair Brains. “I’ve been here since then, and I hope to be here until I retire,” she says.

In the mid-90s, one of Mercedes’s clients — who was also an artist — told her about the SMC Emeritus Program, which offers more than 120 free classes and special programs of interest to older adults. Offerings range from arts and crafts and topics of personal interest to more practical ones like computer training and home arts and maintenance, among others. Under the guidance of former painting instructor Evi Debes, Mercedes began painting at Emeritus. Her weekly routine ever since includes attending the painting class now taught by Jesse Benson at the Emeritus campus on Second Street in downtown Santa Monica.

Mercedes says she loves everything about her Mondays at Emeritus. “I love to see people painting, I have friends, and I myself have so much passion to paint.” She does not paint anywhere else but at Emeritus, and has had her work displayed in several of the Emeritus art exhibits. Stowed away in the waxing room is a newly framed painting of a boat tossed about on a stormy sea, which will be displayed in the upcoming Annual SMC Emeritus Student Art Exhibition. The exhibit runs May 4 to July 5 in the SMC Emeritus Art Gallery, with a free opening reception from 5 p.m. to 6:30 p.m. on Thursday, May 4.

“Mercedes is a fantastic student to work with — socially engaged with her peers at Emeritus, and always pleasant to be around,” says Jesse. “Her work is very expressive and fearless, and reveals many emotive qualities. Her paintings have great visual presence from far away and rewarding details when viewed up close.”

Mercedes — who cites Pablo Picasso, Henri Matisse, and Diego Rivera among her influences — does not like to be held within borders of subject or genre. Her artistic process, she says, often begins with remembering an impression and just following whatever she sees in her mind. “Sometimes I see figures, and I follow them, and I just keep going with the colors — and if I don’t like if, I leave it; if I like it, I keep working,” says Mercedes, whose favorite subjects are the ocean and landscapes in nature.

“I was always fascinated by America,” says Mercedes. “I wanted to be somebody. I wanted to be successful, to work hard, and to be a good hairdresser and an artist. I love people, and I want to feel that people are happy with my work. That’s more important than anything to me.”

Garcia has a website dedicated to her art: mercedesart.com. All the Emeritus Program offerings for older adults are listed on the SMC Emeritus website.