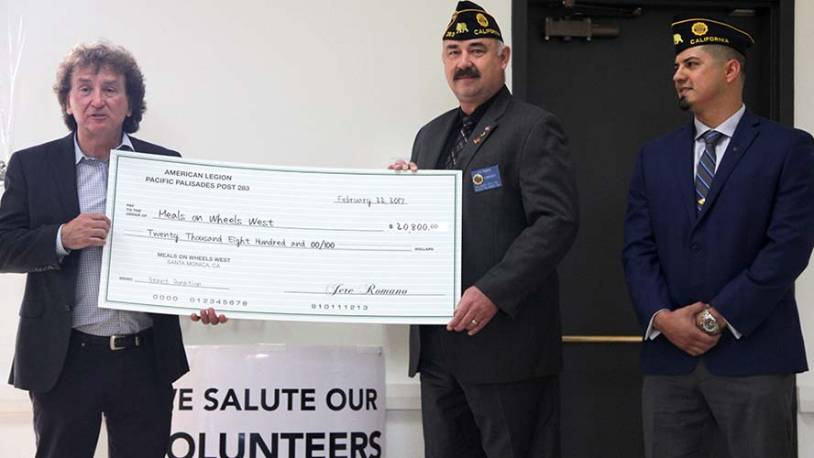 SMC Police Department Sergeant Jere Romano is actively doing good in the community. As Commander of American Legion Post 283—which recently made a $20,000 donation to Meals and Wheels to help feed the hungry, including veterans—Jere was featured in an ABC7 segment and quoted in a Santa Monica Daily Press article.

English professor and poet Carol Davis had a poem Admiral Nimitz from her latest book Because I Cannot Leave This Body featured in American Life in Poetry. The online project is the brainchild of Ted Kooser, Poet Laureate of the United States, 2004-2006. Carol’s poem reached 3.5 million readers around the world!

“Memory of a Rock” is a solo exhibition featuring new paintings by Los Angeles artist and SMC Art professor Carlson Hatton at Patrick Painter, Inc., Bergamot Station—right down the street from SMC. The exhibition features motifs of minimalist markings that run throughout the pieces gathering in large groupings of re-worked mono-prints. The show runs March 25 – May 6, 2017. Don’t miss it!

We have many treasures at SMC—and one was recently named a 2017 “Mid-Coast Literary Treasure" by the Ventura County Arts Council. The honoree was Emeritus instructor and poet Ellen Reich—Ellen was also recognized by the City of Malibu for this distinction. Congratulations!

And, the Los Angeles Review of Books published Strength to Strength: The Life and Ascent of Maya Angelou, a Q&A with the filmmakers of the award-winning PBS documentary Maya Angelou in “And Still I Rise”. The interviewer was, of course, Monique. Read the LARB article here.

Guggenheim Fellow and SMC Art Professor Marc Trujillo has a solo show “Urban Ubiquity” at the Bakersfield Museum of Art. John O’Hern of American Art Collector wrote a great review of the show in the current issue of the magazine, out now.

The Dance Department has a litany of brags! They partnered with SMMUSD to teach ballroom dance to 800 fifth grade students, thanks to the support of the SMMUSD and SMC President Kathryn E. Jeffery and as part of a new pathways program.

The department partners with Grant Elementary School to offer internships in dance education. Now in its second year, the SMC Dance Teaching Certificate program continues to prepare dance educators to teach in the Pre-K and elementary school classroom. This program, developed by SMC Dance faculty Roberta Wolin-Tupas, culminates in a teaching internship. This spring, eight SMC student interns were selected to teach at SMASH/John Muir Elementary in Santa Monica.

In February 2017, the SMC Dance Department hosted a special on-site audition for the prestigious State University of New York, The College at Brockport. The master class audition was led by undergraduate director James Hansen. Four students were awarded $1,000 dance scholarships for transfer. (The Dance Department has moved into their new home: the third floor of the beautiful Core Performance Center.).

And, in faculty brags:

Caleb Mitchell was given an invited residency as guest choreographer/ teacher for St. Louis, Missouri's Center of Creative Arts (COCA). Under the direction of Kirven and Antonio Douthit-Boyd, COCA invited Mr. Mitchell to create a seven minute work using the music of the legendary Scott Joplin. This choreography entitled "Birthday Celebration" is scheduled to premiere in mid- April.

Vanessa Van Wormer, Associate Professor of Dance, maintains a strong national presence as choreographer and instructor. This February, the Pasadena Dance Festival hosted Van Wormer for a contemporary master class, and invited her company VVWdance to present her work “Tide.” VVWdance hosted company dancers from NY and Boston, and invited guest artists from LA to perform in the festival.

Cihtli Ocampo was the featured soloist in Ethan Margolis' production of "Sonikete Blues" in September-October, 2016. The show was a fusion of Blues, Jazz and Flamenco and featured some of the world’s top jazz musicians and Flamenco artists. The show debuted at the El Portal Theatre in NoHo before going to San Francisco and Santa Cruz. In addition to teaching at SMC, Ms. Ocampo is currently part of the Santa Monica Dance Academy bringing ballroom dance to fifth graders in Santa Monica and Malibu.

Last December, Laura Canellias continued her six-year streak of judging the Miami based World Latin Dance Cup, one of the largest dance competitions of its kind bringing professional & amateur dancers from over 35 countries to compete in over 70 divisions in Salsa, Bachata, Cha-Cha-Cha, Kizomba & Tango.

And that’s it from the illustriously busy Dance Department—for now!

Luis Andrade is busy on campus—he is a Communication Studies Professor and Co-Director of Speech and Debate. But he stays busy off-campus as well, conducting research studies for publication. An article by Luis titled, "The Function to Serve: A Social-Justice-oriented Investigation of Communication College Mission Statements," was published in the Journal of Hispanic Higher Education published on June 7, 2016. He has another article forthcoming titled "Latina/o Transfer Students’ Selective Integration and Spatial Awareness of University Spaces" in the same journal—a highly respected one that deals with issues related to Latina/os in higher education throughout the nation.

SMC’s Dean of Noncredit and External Programs Dr. Dione Carter has two brags: on a personal note, her doctoral dissertation “Hip-Hop Culture and Critically Conscious Non-Collegian Black Men: A Phenomenological Study Based in Urban Los Angeles, California” was cleared and delivered to ProQuest for publishing. And in the professional realm, Dr. Carter’s colleagues—including faculty, classified staff, and administrators—accompanied her and Laura Manyweather, (Interim) Project Manager of Adult Education Programs, at the Association for Community and Continuing Education (ACCE) Annual Conference held in San Diego in February.

ESL Department Chair Janet Harclerode submitted this brag with the header “Not Bragging Yet!” (We think she should). Janet is training for a century ride at Lake Tahoe in June to raise funds for the Leukemia and Lymphoma Society. America’s Most Beautiful Bike Ride is actually only 72 miles, but a short trip to Truckee and back makes it 100 miles. Janet writes: “Here is my fundraising page for anyone who might want to contribute. Better yet, join us for some great bike rides and a worthwhile cause.”

History instructor Jaime Cruz hosted an immigration workshop at Virginia Avenue Park in March. The “Know Your Rights” immigration series had an immigration attorney on hand to address topics related to the executive orders and immigration enforcement as well as a therapist who shared tips with those dealing with mental stress.

Communication Studies instructor Sheila Laffey moderated a panel discussion after a packed screening at the Aero Theater in Santa Monica on February 22 of Love Thy Nature, a film on which she was Associate Producer. Panel members included director Sylvie Rokab, actress Frances Fisher (Titanic, Unforgiven), Andy Lipkis (founding director of Tree People), and Atossa Soltani (founder of Amazon Watch). Narrated by Liam Neeson, Love Thy Nature has won 27 awards and has screened in 16 countries. It screened at SMC on April 25 as part of Earth Week through the Center for Environmental and Urban Studies and the Media and Communications Department series. Director Rokab and Associate Producer Laffey discussed the film.