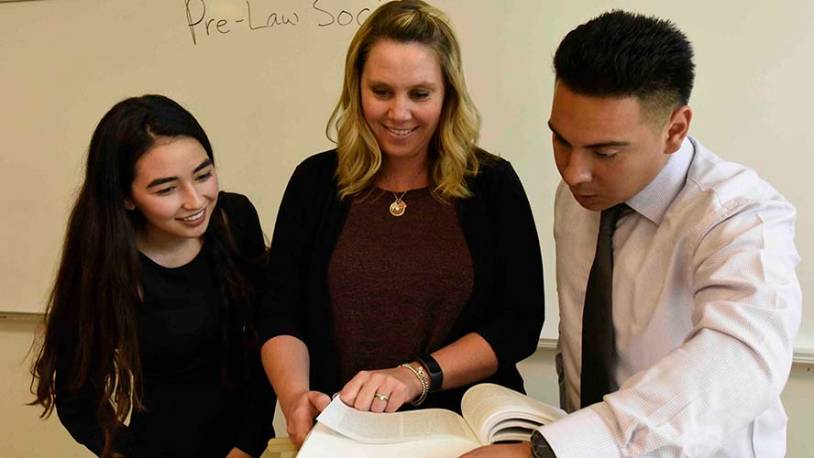 The first 10 participants in SMC’s Law Pathway graduated from the program on May 23 at an inspiring ceremony sponsored by the SMC Foundation, with Mia Yamamoto—one of the most distinguished criminal defense attorneys in Southern California—as keynote speaker. They have offers from and are transferring this fall to Columbia University, UCLA, Stanford University, and California State University, Northridge. (Alexander is transferring to CSUN and Nilou to UCLA).

In 2016, SMC joined the California State Bar Association’s Pathway to Law School initiative, a collaborative effort between the bar association and 29 community colleges and six law schools, designed to help diversify the legal profession and smooth the path to law school for underrepresented students. (Thuy Thi Nguyen—current President of Foothill College and former Interim President and CEO of the Community College League of California—was the architect of the California Community Colleges Pathway to Law School Initiative, and the founding board chair of California L.A.W. Pathway, the nonprofit that coordinated this unprecedented “2+2+3” program with the California State Bar).

The program requires completion of nine courses—including two created specifically for the Law Pathway—and offers individual mentoring, exposure to careers in law, networking opportunities, counseling support, leadership training, and an experiential-learning component at one of several legal service organizations in the area.

“I’ve had friends who work in law offices, and they didn’t learn as much as I did in just one day in my internship with Neighborhood Legal Services of Los Angeles,” Nilou says.

“They’re getting hands-on work experience,” notes SMC Political Science Professor Christina Gabler, faculty lead for the Law Pathway program. “Our students talk with clients, learn what their issues are, and work side by side with legal professionals to help deal with those issues.”

“It’s super interesting,” says Nilou, a political science major. “I helped a woman file for a restraining order, and went through the whole process with her. And that was just my first day.” On another day, she translated for a woman of Iranian descent who was filing for divorce.

In addition to Neighborhood Legal Services, current participating organizations include Asian Americans Advancing Justice and Bet Tzedek Legal Services, where Alexander volunteers. Students are required to complete at least 30 hours of service, but Nilou says she plans to keep volunteering for at least a year.

“As we grow the program, we hope to have both private and public organizations as experiential-learning partners, as well as law firms,” Professor Gabler adds. “So a student interested in entertainment law can intern at a firm specializing in that.”

As part of Experiential Learning in the Law, the capstone course of the Law Pathway program—taught by Professor Gabler—the students journal about their experiences, write a research paper related to their work in the field placements, and learn how to draft legal briefs, among other activities. The other new course developed for the program, Introduction to Law, explores constitutional law.

“Professor Gabler is brilliant and makes the class easy to understand,” Alexander says. Nilou agrees. “I’ve taken every single class Professor Gabler teaches at SMC,” she says. “She’s one of those professors who will go out of her way to help you understand. She brings the Constitution to life.”

Those who complete the curriculum receive a special notation on their transcripts and, after earning their four-year degree in any subject, will receive preferential admission review at the six participating law schools.

The Law Pathway program also emphasizes noncognitive skills needed by attorneys, says Edna Chavarry, Interim Director of Academic Affairs Initiatives. “It’s a very conservative field, and you have to pick up the style of communication, dress, and mannerisms of being an attorney,” she says. Through a partnership with the SMC Business department, Law Pathway students can access a closet full of business attire. “We also discuss the questions they would likely be asked during an interview.”

Other members of the Law Pathway team include Dana Nasser, who teaches Business Law, and Counselor Vicenta Arrizon.

Students also have access to representatives at a host of other institutions—including UCLA, Southwestern Law School, New York Law School, and University of Seattle—through the California State University Pre-Law Society’s annual law fair. And throughout the year, students interact with the legal professionals on the SMC Law Pathway’s Advisory Council for networking and mentorship.

Chavarry has big plans for the program’s future. “I’d like to see a much larger graduating cohort,” she says. Also in the works are field trips to judges’ chambers and one of the six law schools, as well as deeper mentorship with Advisory Council members, and interaction between SMC pathway students and those at other community colleges. “I want them to be proud of having come through the pathway.”

Alexander and Nilou have nothing but praise for the program.

“I’ve made lots of good connections,” Alexander says. “SMC’s Law Pathway just prepares you. I’m grateful for all the opportunities it has given me.” More information on the SMC Law Pathway Program.