All it Took Was Some Ice Cream 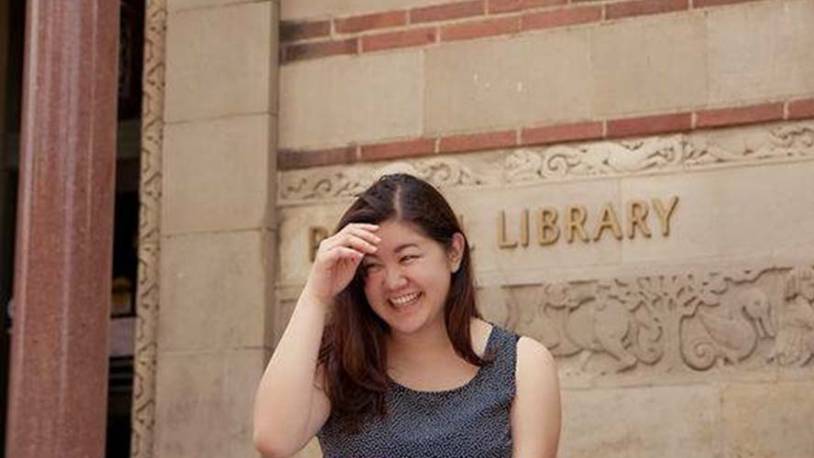 When Tiffany Inabu first walked on to the Santa Monica College campus in 2008, she had no inkling that—in just a couple years—she would go on to become President of the SMC Associated Students (AS).

The only child of Japanese immigrants and a first-generation college student entering SMC from Quartz Hill High School in Lancaster, California, she didn’t feel connected to campus life during her first semester. She would park at a satellite campus, take the shuttle to SMC’s main campus, attend classes, shuttle back to the car, then go home to study.

But it didn’t take Tiffany long to become active in student life. “My first interaction with Associated Students was in a class, when someone told me that if you vote, you get ice cream.” That sealed her fate. “I went up to the AS office, because I wanted the sticker that said, ‘I voted.’ And I wanted the ice cream!”

Now in her third year of the California State University, Long Beach Master of Science degree in Counseling with an option in Student Development in Higher Education, she was back at SMC as part of the California Community College Counseling (4C) Internship Program, and saw her life come full circle.

In her second semester at SMC, Tiffany would show up in the AS office every day, asking how she could help. Impressed with AS-sponsored activities such as Club Row and movie nights that engaged students on campus, “I began spending most of my time there when I wasn’t in classes,” she said, “and the rest just sort of happened organically.”

It wasn’t long before she became Commissioner for Outreach, Chair of the AS Budget Management Committee, and she joined the Student Affairs Committee as a student representative. Laurie Guglielmo, Chair of the SMC Counseling Department, was a faculty member on that committee, and says Tiffany stood out. “She had a maturity and a sophistication that wasn’t typical. She was very open to learning, took a very reasonable approach, and we all appreciated her a great deal.”

And that grounding in student issues gave Tiffany the background she needed to become an effective President for the Associated Students.

While Tiffany’s trajectory as a student leader was clear, her educational goals still hadn’t quite crystallized. Despite having been accepted at various four-year colleges in majors she wasn’t sure she wanted to pursue, her parents—who knew of the College’s reputation—encouraged Tiffany to explore her options and passions at SMC.

“I was bouncing around a few majors, and was open to many different things,” she said. “And SMC is the kind of place where you can do that.”

At first she wanted to be a nurse, “but I couldn’t stand the sight of blood, not even on ‘Grey’s Anatomy.’ And despite some of the stereotypes thrown at me in high school, my math and chemistry skills were nonexistent.” She tried music, global studies, and political science. After receiving two AAs from SMC, Tiffany transferred to UCLA in Asian American Studies.

Her interest in political science led her to apply for SMC’s prestigious Dale Ride Internship Program, and she spent a summer working on veterans affairs and higher education in Senator Dianne Feinstein’s Washington, DC, office, taking advantage of the many opportunities that were available.

“We could go to Congressional hearings, we wrote memos, and our legislative correspondents took what we wrote seriously,” she said. “We also were able to talk to constituents, read letters, do research to help answer the questions that were important to them.” Today, Tiffany sits on the committee to select the next Dale Ride interns.

A Desire to Help

That internship helped her realize that no matter what her ultimate educational goal was, serving people would be paramount.

“At SMC,” Tiffany recalled, “I would walk into the Welcome Center or the Financial Aid, Scholars Program, or counseling offices, asking so many questions. And everyone was just so patient. They would walk me through the process. And it wasn’t just counselors. My bookstore supervisor, my AS team, the deans, vice presidents, and faculty on the Student Affairs Committee all really respected what I had to say, and helped guide me. For me not to give back to others the way they helped me would be a disservice. I want to pay it forward.”

So it was only natural that now, at age 26 and in her final year as a graduate student, Tiffany would return to SMC for the intensive 8-week, unpaid 4C counseling internship. In fact, her goal is to become a counselor, and if the stars align, she’d love to work at Santa Monica College, in any capacity.

Patti Nakao, SMC counselor, was Tiffany’s mentor for the 4C internship, which consisted of observing counselors as they advised students, attending rigorous training in the “nuts and bolts” of counseling, and learning how to apply the rules as needed.

“Our job is balancing the rules with understanding the individual student’s circumstances and taking a holistic approach,” Patti says. “What Tiffany brought to this internship was compassion. She’s been through the transfer experience, so she could explain the process, but she also brought that feeling of how really finding a place at SMC can enrich a student’s life here.”

One of the 4C Internship trainers, Counselor Teresa Garcia, says that interns like Tiffany are selected because of their energy, and because they want to be professionals working on issues affecting students. “Tiffany’s positive attitude and passion for the community college student is a good example of the qualities we embrace in the Counseling Department at SMC. The fact that Tiffany is a former student and AS Student Body President only reinforces the fact that our college is a special place that attracts special people.”

Tiffany agrees. “SMC has an amazing culture of academia and student support, and I felt like it was a really close-knit family. Everything that’s happened to me is because someone touched my life in some way or helped me, so anything I do, any success I have, it’s not just for me, it’s for everyone.”