A Learning and Healing Garden 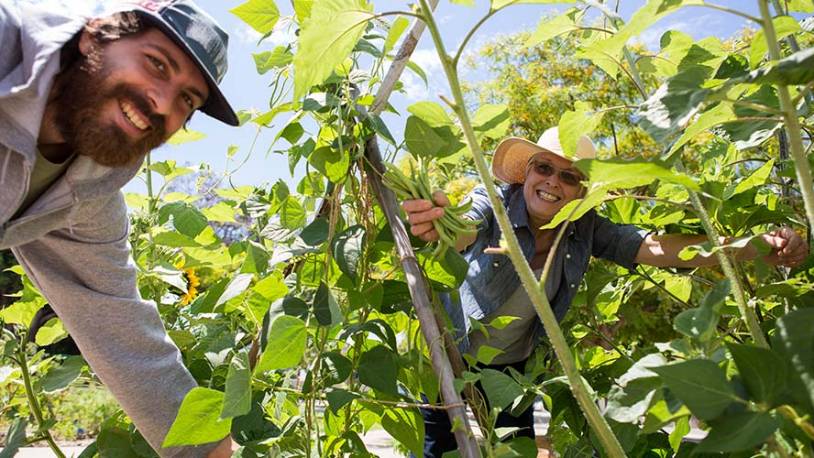 What’s in a garden? Plants, of course—flowers, vegetables, herbs, vines. But what’s not as obvious is the spirit of caring and community that grows along with them.

Santa Monica College students are primarily responsible for running the Organic Learning Garden (OLG), located at the intersection of the Art, Science and Theatre Arts buildings on the main campus. The OLG officially opened in October 2010 and now thrives as a social gathering and learning space, making commuter students feel more connected to the campus, and staff, faculty, and others more connected to one another.

Ferris Kawar, SMC’s Project Manager for Sustainability, points out that while SMC does not teach horticulture, the OLG serves as an outdoor classroom for students across multiple disciplines: “Not only do they learn how food is grown, but students from Biology, Chemistry, Anthropology, English and even Cosmetology who want to understand how to create natural products, come to the garden to learn about the cycle of life and the interconnectedness of nature.”

Growing Closer to the Earth

Alex Sonnenschein spent time in the OLG, at first as a student and later as an assistant student manager, before receiving his Associate’s degree in Anthropology in 2015. For him, the garden was truly transformational.

“It was really my sickness that brought me closer to the earth and the plants,” Alex explained.

Born and raised in Brazil, by the age of 14 he didn’t know what he was suffering from was depression. At 19, he began experiencing manic episodes and hallucinations, “hearing sounds, sights and visions that only I could see,” he said. He discovered there was a family history of mental illness. He was later diagnosed with schizophrenia.

While being treated with anti-psychotic medications, he joined Club Grow, the student organization that oversees the OLG. “I was blessed with a supportive community of people from the Center for Environmental and Urban Studies (CEUS), and met not only friends, but role models who were embracing life in a way I couldn’t do just yet.”

Hands in the Soil

There was something about putting his hands in soil and getting it on his skin, Alex said, that had an anti-depressive effect on him, keeping him stable. “Using water to moisten the earth, transforming that energy into plant life, and taking care not only of the plants but the bees, flies, praying mantis and other forms of life was important for me to focus on; it brought my attention to the details of these lives.”

Only a month after transferring to UC Berkeley, where he tried to wean himself from his meds, Alex had another breakdown and asked to be hospitalized. This past spring he attended Long Beach City College and took a class about nutrition, and now he’s living in a transitional home in Long Beach, gardening, cooking and sharing his knowledge, while volunteering daily at The Growing Experience, an urban farm in Long Beach.

Under the guidance of an orthomolecular psychiatrist, he’s converted to a vegan and gluten-free diet along with supplements, which he believes is helping him. “Working in the garden provided me the best produce I could get. The plus of that gift at SMC was to have great potlucks and community meals together, centering on what we learned from our gardening practice.”

Everyone who encountered Alex in the Garden describes him the same way: as knowledgeable, loving, inquisitive and a great listener who always gives people his full attention.

He’s just been accepted into an Advanced Peer Specialist Training Program with SHARE (Self Help and Recovery Exchange in Culver City), which he says will give him the opportunity to kick start a career in the mental health field. “I’ll be able to help others who have conditions similar to mine but are less capable of helping themselves.”

Other Lives Transformed, Too

Cynthia Kraus already had a degree from NYU and a successful career in TV when she decided to pursue her lifelong desire to become an artist. She enrolled at SMC because it’s one of the rare community colleges offering sculpture courses, her chosen specialty. “Being a mother for 18 years, my focus has been my family,” she said. “But the OLG is the place where I’ve been able to find community.”

She joined Club Grow in 2015 and is currently one of the garden’s student managers. She also became a Los Angeles County Master Gardener in 2016, a University of California/Cooperative Extension (UCCE) training program that creates volunteer instructors who teach gardening to the general public. “Now I am able to teach students how to grow their own food and even train new managers. It’s been really wonderful.”

Former OLG manager Mark Biedlingmeier also became a Master Gardener in 2015 while working in the OLG. In June 2018 he received his B.A. in Geography and Environmental Studies from UCLA and will return there in the Fall, after a summer of teaching English in Japan. When he returns, he will be working for the Jane and Terry Semel Healthy Campus Initiative, an ambitious program that hopes to make UCLA the healthiest campus in the U.S.

Arriving at SMC in 2014, he was initially interested in becoming a registered dietitian. Ready for a new chapter, he transferred from a community college in Pennsylvania, where his parents had divorced.

Mark connected with now-retired English professor Dana Morgan, one of the leading forces behind the creation of the OLG, learned about gardening, went through the Sustainable Works program and began taking environmental and geography classes. He soon became the garden’s student manager.

“The OLG is a place that intrinsically promotes a sense of responsibility for things bigger than yourself,” he said. “It’s helped me with my stress, built my confidence and offered me one of my first leadership opportunities. It was a huge stepping stone for me; I would not have been at UCLA without it.”

The Power to Heal

In her retirement, Dana Morgan continues to advise the OLG weekly in the fall and spring semesters as a Master Gardener. She still attends Club Grow and student manager meetings; she also helps Ferris Kawar with long-term planning, supplies and budgeting for the garden (student managers are paid for their work).

“The garden’s strongest story is about the students,” she says.

Having taught courses in Food Politics in the OLG, she now works as a mentor for a similar course at Otis College of Art and Design, which takes place at Emerson Avenue Community Garden in Westchester, where she maintains a garden plot.

Dana focused her sabbatical project in spring 2010 on the question, “What can we learn from gardens?” by visiting community, botanical and school gardens, interviewing effective garden leaders, students and writers. “SMC’s mission is to help students learn to contribute to the global community, supported by a personal relationship to the place they inhabit,” she wrote.

Alex Sonnenschein feels that personal connection. “Plants are teachers. They’re wiser than I am. They know when to set seed, germinate, and achieve vigorous growth.” He’s still learning and applying their lessons to his life and healing every day.

Here are some articles on the healing benefits of gardening: