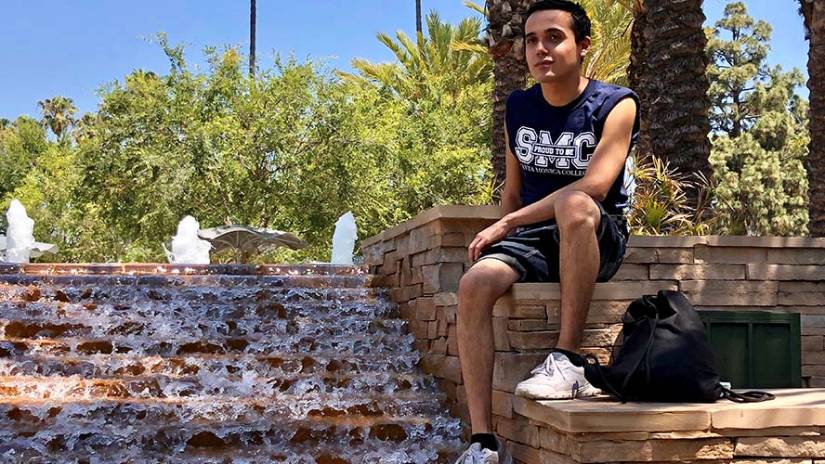 “My name is Josh Elizondo and the biggest obstacle I’ve had to overcome in my life was growing up in the foster care system.” These are the first words spoken in a YouTube video by a young man with silver hair and the kind of face that tells a story. The facts, as he narrates them in the video, are bleak: Josh was taken away from an unhealthy family situation when he was around twelve. One of the homes was “out of the reality show ‘Hoarders.’” There’s rejection, heartbreak, alcoholism (his own). But Joshua “Josh” Elizondo managed to hide his pain under a bubbly exterior.

His childhood forced him to look at his life and realize, says Josh, that he was bigger than his circumstances. As soon as he graduated from high school, Josh moved across the country: from Detroit, Michigan to Los Angeles—on his own—to pursue higher education and a career in entertainment. When he left, he had to give up the financial and other support due to him as a ward of the state of Michigan. But Josh did not hesitate. For his dreams, he literally put everything on the line.

A Series of Unfortunate Incidents

In 2018, Joyce Landsverk of the Assistance League of Santa Monica received a three-page letter from a Santa Monica College Global Studies, Public Policy, and Liberal Arts major named Josh Elizondo. He was also in the college’s Guardian Scholars program, which provides academic and counseling support to current and former foster youth who were enrolled at SMC. Josh was seeking a $2,000 scholarship from the Assistance League to help him get by.

He intended to transfer to UCLA or Temple University, Japan. “Outside of school, I do many things,” Josh wrote. “Many” was not an overstatement: Josh had had acting roles in the feature films “The Good Neighbor”, “Severus Snape and the Marauders,” among others. He’d also appeared in music videos for Justin Bieber, Demi Lovato and Britney Spears. He’d volunteered for the Department of Children and Family Services and nonprofits including California Youth Connection and Spirit Awakening representing foster youth, homeless youth, and incarcerated juveniles. And Josh was—and still is—an employee at Chipotle.

“I mean, it was just crazy,” says Joyce Landsverk. “He was doing all this and working hard…while actually living out of his car for a while. Through all this, he is so positive, [writing that] life is a gift . . . and, well, you do what you can to help others, so they don’t have to go through what [you’ve] gone through.”

“If Josh shows proof of enrollment at a university, he will continue to receive our scholarship at $3,000 per year,” says Joyce, adding that the Assistance League’s hope is to continue to provide an annual scholarship to a foster student at Santa Monica College.

A series of unfortunate incidents—including a stretch of unemployment and being unable to pay several bills, a car accident, and health issues—had made it difficult for Josh to concentrate on school, which was why he applied for the scholarship. Through all this, Josh wrote, “being a foster youth has made me resilient and independent.”

“Even though the state says that you have a parent, you are very much for yourself,” Josh says, while also noting that unlike some foster children who “just know the system”, he had contact with his biological family. His grandmother had left him a little money and he was able to use that for his cross-country move in 2014.

This move was also precipitated by Josh’s entrée into the entertainment industry, of his own initiative: he had acquired a manager through the International Model and Talent Association after placing in two categories of an IMTA competition. (He is currently working on a pop album with a Grammy-winning producer, and the first track, which will be released—hopefully in a year or two—is called “People like You.” Written by Josh, the song talks about how we have great impact on our fellow humans, but, for the most part, are careless about this fact).

Josh’s networking and people skills led him to forge many important connections, both on- and off-campus. He chaired the Los Angeles and state chapters of California Youth Connection, advocating for policy changes that would make a difference in the lives of foster youth. While his social workers were “amazing” and followed Josh’s progress closely—he still keeps in touch with them—Josh says: “There’s definitely a lack of community within foster care…if you’re taking [kids] from an environment that’s not healthy or deemed appropriate, and then [putting] them in another environment that’s not so nurturing…it’s not going to help.”

He signed up for personal development classes, to dismantle some misconceptions. “Growing up in foster care, bouncing between homes and people…[one] typically forms the belief that you’re not good enough,” says Josh. Some of the courses helped him “silence the little voice in his head.”

He channeled his painful past and the lesson he’s learned—“big people have big problems”—into advocacy and volunteer work with several organizations.

At SMC, a Village for Josh

Before he finally came to SMC, Josh had attended a few other community colleges. Out of the four he’s attended, Josh says SMC “has the environment that is most welcoming.”

“The thing I noticed about SMC is that they’re very passionate about making it a better environment,” he says. Josh quickly found a family here. There was “wonderful” counselor Glenda Johnson at Guardian Scholars (the program also connected him with resources and provided basics like food). Diane Chen, the dietitian at the SMC Health Services Center, gave Josh granola bars and fitness advice. Dr. Paul Jimenez, a counselor in the Adelante Program, got on Josh’s case when he “needed a reality check.”

And many others helped Josh figure out how to make college work, in spite of overwhelming difficulties: dealing with his mother’s suicide attempt, living out of his car for part of the spring semester, and more.

Then there was career counselor Jenna Gausman who helped him work out what classes he needed to take to move ahead. She says Josh’s energy and enthusiasm were “contagious.” “He was motivated and ready to make a strategic plan for his educational and career goals even though his path to college has not been an easy one,” Jenna wrote. In fact, she was so impressed by Josh’s communication skills and leadership that she invited him to be a part of SMC’s Guided Pathways “student advisory squad”. (Guided Pathways is a newly launched institutional redesign of how students experience college, and aims to help more SMC students achieve their academic and career goals).

“It was a great day for SMC when Joshua chose to enroll at our institution as there is no question in my mind that he is going to make a lasting impression on our campus that will improve the student experience for years to come,” Jenna wrote.

Changing What it Means to Be Human

Josh wants to someday become the U.S. ambassador to Japan (hence: Temple Tokyo). He would like to have a successful career in entertainment and use that platform for social justice, and, specifically, to make reforms in the foster care system.

But his aspiration, says Josh, is to accomplish something even bigger. “I’m out to change what ‘community’ means,” he says, “Not just in the United States, but in the world. We as human beings will not survive if we don’t see we’re all human beings.”

While he did not have the opportunity to form opinions about crucial societal issues, Josh is making up for lost time. “I was in survival mode…I couldn’t form opinions about race or gender, because I was worried where I was going that night. Are the police going to be there when I get home? Am I going to have food?”

Josh says he has to motivate other youth to get more involved—because, understandably, people often don’t want to work for something that may not benefit them directly.

“When your life becomes about something bigger than you,” he says, “it’s actually a lot more fun to live.” And, expressing another thought that seems to keep him going despite all the hardships life has thrown his way, Josh Elizondo wrote: “We’re all connected and I know whatever is meant to be, will be.”

Check out Josh Elizondo’s IMDB page for his full acting resume. And to see the full range of the Assistance League of Santa Monica’s philanthropy and programs. SMC’s Guardian Scholars.