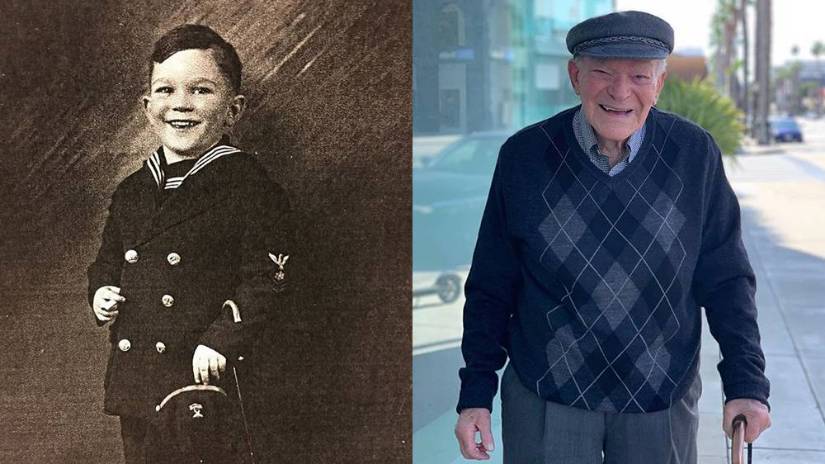 Social media phenom Jerry Rosenblum is a Corsair to watch.

Whenever 96-year-old Jerry Rosenblum sings a song, dances a jig or mugs for the camera, he brings pleasure to 17,800 people.

That’s how many followers the Brooklyn-born retiree has on Instagram.

Which is pretty remarkable, because Jerry never sang a note in public before his 69th birthday. And he doesn’t know a thing about social media.

His whole career was in men’s clothing stores. Before that, he was a Navy machinist during World War II. The only songs he knew were “The Star-Spangled Banner,” “Chattanooga Choo-Choo” and “God Bless America.”

A Corsair and a Crooner

Jerry credits SMC’s Emeritus Program with unleashing his mellow tenor. For the past 20 years, he has been taking Vocal Training (Music E04) at the 2nd Street campus in downtown Santa Monica. By now, he has a hundred Golden Oldies in his repertoire. He keeps a song list in his pocket. Ask for “Young at Heart” or “It Was a Very Good Year,” and he’ll croon it on the spot.

Recently Jerry strutted his stuff at the Edgemar in a program he lovingly organized to showcase the talents of his longtime Emeritus “singing friends.”

On top of his voice class, each semester Jerry faithfully enrolls in Current Events (Pol SC E00). Thanks to that course, he went to the polls last November fully prepared to vote intelligently on every candidate and ballot measure.

“To be able to keep up with events taking place domestically and overseas makes you a more interesting person,” he says. “When you know more and read more, you can converse with all kinds of people.”

“I’m the teacher’s pet,” he chuckles. “I never miss a movie.” (His all-time favorites are Fiddler on the Roof and The French Connection, though he relishes everything from film noir to nature documentaries.)

It was only in retirement that Jerry discovered the joys of learning. As a young man, he didn’t have time for college. It was the Great Depression. He went to work at 14 to support his widowed mother. She lived to be 102, and Jerry, a confirmed bachelor, took care of her all those years. It was for the sake of her health that they moved from New York to Santa Monica in the 1970s.

Nowadays Jerry is an ardent advocate for life-long learning. He talks up the Emeritus Program to friends and neighbors, calling it “a wonderful, wonderful experience—a place to make up for some of the things you didn’t have time to do when you were busy with your family and working on your career.” Jerry’s mind remains sharp as a tack. He can tell you the name of the cardiologist who performed his quadruple bypass in 1991. Last year he easily passed the DMV test to renew his driver’s license.

When he isn’t taking Emeritus College classes, Jerry hangs out at the public library, attending author talks and reading the financials to track his Schwab investments. He’s a landlord, too, with rental properties in Las Vegas and Florida, where his niece and nephew live.

It doesn’t sit well with Jerry that his Emeritus classes are free, so he makes a cash donation every semester. This winter, he went a step farther, creating his own fundraising web page through the SMC Foundation’s Promise Holiday Giving online event. The fund provides scholarships, textbook aid and emergency relief for needy Corsairs. (You can help Jerry meet his $1,000 fundraising goal).

An Internet Star Is Born

Jerry’s Instagram celebrity came about serendipitously, thanks to an intergenerational friendship.

Katie Miller is a 27-year-old Uber marketing manager who volunteers at the Silvercrest Senior Residence, where Jerry has lived since his mother passed away in 1999. Every Friday, Katie leads digital device workshops in the reading room of the Salvation Army-owned building. Though Jerry himself has no interest in technology, his quick wit and chatty, up-beat personality charmed Katie. She started coming early to join him for dinner in the cafeteria. They became best buddies. Her friends became his friends, and vice versa.

Jerry’s singing and Katie’s social media skills converged in 2015, after he penned a campaign song for Hillary Clinton. Hearing that the presidential candidate would have a book signing in Los Angeles, Jerry recorded his jaunty pastiche, sung to the tune of “That’s Entertainment,” and burned it on a CD.

He set out for The Grove bright and early that day. Seven hours later, he won a guffaw from Clinton as she signed his copy of Hard Choices.

“You know, Hillary, I was a young man when I got in this line,” he’d quipped.

But Jerry never heard back about his campaign song. When he shared his disappointment with Katie, she whipped out her smartphone, videotaped him reprising “That’s Hillary Clinton,” and uploaded it to YouTube. Deploying her arsenal of social media skills, Katie made sure it got noticed. Time magazine picked up the story. Soon Clinton herself was tweeting it out; her campaign’s Facebook page posted a link to the video.

Katie kept snapping pictures and making short movies of the bright-eyed nonagenarian as he went cheerfully about his days. It was too good not to share.

In fall 2017, she created an Instagram account, Jerry_Rosenblum, and started posting her growing collection of life-affirming Jerry-isms.

Like this one: “Raise your cane if you’re excited for the weekend!”

And this one: “I just got my license renewed in January so now it will expire when I’m 101. I always joke that I hope I don’t expire before it does.”

He started getting fan mail from around the globe. More than a hundred birthday cards flooded his mailbox last January. Followers send cookies and chocolates. One had gourmet ice cream shipped from Penn State’s dairy farm. Another sent a box of baclava from Amman, Jordan, with instructions to “share them with Peggy.” A friend and fellow Silvercrest resident, the 100-year-old Peggy often appears in Jerry’s Instagram feed.

“Though we’re seventy years apart in age,” she told the hosts, “we agree on many things. We just really get along; we learn from each other.” Next up: Jerry is publishing his memoir, told through 125 “vignettes.” There’s even talk of a reality TV show.

Clearly this 96-year-young Corsair has a bright future ahead of him.