Surreal 180: An Essay by Andrea Martinez 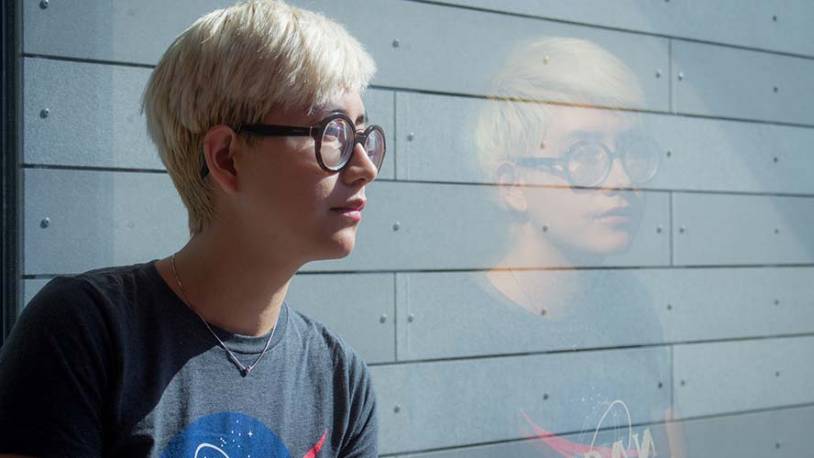 The best word I can use to describe my experience with the NASA Community College Aerospace Scholars (NCAS) program is surreal. As a child, televised space shuttle launches touched something visceral in me. I would daydream for hours on end of being one of the astronauts on board, traveling far into the universe to complete a mission that would benefit all of humanity. It still brings tears to my eyes thinking about the bravery and sustained knowledge and effort from huge teams of people that NASA’s missions require. It has always been this huge, awe-inspiring entity, wrestling with difficult problems and succeeding in the face of the unknown, all with the overarching goal of pushing humanity forward. It represented everything I’ve ever wanted to do with my life, even before I knew how to articulate it. In a way, NASA has been a beacon of the best parts of humanity: the pursuit and celebration of knowledge and the ability to come together for a common goal. It also represented this unreachable enormity. What could I, as a fine arts major and fashion designer, bring to the table for people who looked at the stars and said “We can get there.”

My path to NCAS, and to STEM in general, has been winding to say the least. It required essentially blowing up my life and committing to a hard 180 away from everything I had studied and worked for. As difficult and terrifying as this was, the alternative was even more so. I had earned a BFA in Fashion Design and was working as a designer at Vince, at the time one of the top names in LA luxury, and before that at cult darling Staud. I was also desperately unhappy.

The catalyst for my decision to leave was a moment of terrible clarity I had at one point. I realized that I had achieved what would be considered success in my field—working as a designer, rather in a design support position, and holding this position at such a highly regarded company so early in my career. And yet I didn’t feel fulfilled or like this would be an environment where I would ever be challenged to grow. After leaving my position, I spoke to as many people as I could at all levels of the fashion industry. At this stage, I was still unsure of whether I was going to leave it entirely, but my decision was cemented when the most positive response I received was a lukewarm appreciation of a position, mostly due to the amount of time off it allowed.

During this period I had also started to reflect on what it was that I was really looking for in a career. Having decided to transition away from something I had worked so hard for and come to define myself by had triggered an identity crisis: who was I if I wasn’t an artist, a designer? After exiting what I thought was my dream career I was completely demoralized and had zero clue where to start thinking about what I wanted to do next.

I made list after list of the smallest things—anything I could think of that I might like in a job. I knew that I wanted to work in a space where innovation was valued, learning was encouraged, and where I would be challenged by difficult problems. I wanted the chance to advance the boundaries of human potential. Slowly, what began to take shape was the realization that a STEM field was where I would find those things and that the transition would mean I’d have to go back to school to fill in gaps in my curriculum before applying for grad school. This is the part of my journey where Santa Monica College (SMC) comes in.

At the time, I felt like the sky was falling and everything was on fire, so I was also reflecting on mistakes I felt I had made during my undergrad and was determined not to repeat. One was not having pushed myself harder to attend an institution at the top of my intended field. SMC’s excellent academic reputation and the vast array of resources it offered students made it a natural choice. I had a very vague idea of what I wanted to do at this point, so I threw myself into math and computer programming courses to lay a foundation of knowledge and skills that would be applicable to as many disciplines as possible.

Another mistake I felt I’d made through my undergrad was not having been more involved. This time around, I became a member of the SMC chapter of California honor society Alpha Gamma Sigma (AGS). Through AGS, I started to tutor math at the SMC Learning Disability Center first as a volunteer and later as an employee, something I still do and absolutely love. I’m constantly asked if I’m just naturally good at math and the answer is definitely not. I’ve always struggled with it.

The only change now is that I decided I was going to become a “math person” because that’s just what it would take to achieve my new goals. The minute I did that and started devoting real time to it, the progress I made was incredible. This is a huge reason that tutoring is so rewarding to me—I’ve never been the person who sees a new math concept and immediately understands it. I’ve always had to work at it, so when I can then take that knowledge and apply it to help another student come to that “lightbulb” moment where everything clicks into place and they understand it now too, there really isn’t a comparable feeling.

Apart from student organizations, what I found was that the math and computer science faculty at SMC made it incredibly easy to participate in extra-curriculars. I had many professors who would consistently send the class emails about internship opportunities, scholarships, and STEM panels happening on campus. One of the emails I received was the one soliciting applicants for NASA’s NCAS program. Once again, all the old feelings of awe and wonder surged up, but this time with a tiny, growing kernel of excitement that just maybe now I had something to bring to the table at an organization I’d looked up to for so long.

“Great people do things before they’re ready” and so despite still feeling more like an ex-fashion person who was somehow doing pretty well at this math thing, I sent in my application and began my NCAS journey. The highly competitive program started as a five-week online course, during which I learned about NASA’s history, contributions, and current missions and was tasked with completing a capstone project that, together with my performance in the course, would be my application to the highly competitive onsite portion, which was a four-day engineering workshop at one of the 9 participating NASA centers.

My choice of capstone project was to analyze the pathways discussed in the literature for the Evolvable Mars Campaign and create a research backed proposal for what I saw as the most viable approach. This was a top to bottom analysis of everything from route to equipment and fuel sources, with each choice requiring careful justification. It’s safe to say that I fell into more than one deep rabbit hole, looking up from deep within minutia of Solar Electric Propulsion systems or methods of extracting oxygen from regolith only to realize it was now somehow 3 AM. After the recovery period from this paper—and believe me, there was a recovery period—I was obsessively refreshing my email and wondering if I’d be chosen. Had I given it everything I could? Should I have taught myself AutoCAD and drawn up a prototype Mars vehicle?

Finally, a day after the date we’d been told decisions would go out, an email from NASA arrived. I opened it, and all I saw was the first word: “Congratulations!” That was when the screaming started. NASA had seen something in me, and it was a tiny affirmation of everything I’d done up until that point. Everything I’d given up, every lingering doubt I’d pushed past, every morning when I’d gotten up at five o’clock to do just a few more math problems before the test. It felt like the closest thing I had to a hero telling me I’d made the right choice. I was headed to NASA’s Jet Propulsion Laboratory (JPL) center in Pasadena, CA. I would later find out that from over 800 applicants, my cohort was whittled down to just 30 students per center.

For the onsite project, we were divided into teams that each took on the role of a company developing a prototype Mars vehicle, with the intent of marketing it to NASA. We were briefed on the two missions our prototype would have to undertake and then got to work building it. Over four challenging fourteen hour days, we ran through seemingly endless rounds of testing and revision, both of the actual vehicle and the accompanying programs we’d written for it. As lead software engineer for my team, I created and tested these programs to control functions for our rover, which proved to be both stressful and satisfying and ignited an interest I didn’t know I had in programming for robotics. We also received invaluable insight from panels with current NASA employees and interns who had also attended community colleges, as well as group and one-on-one resume workshops with JPL HR personnel and the NASA mentor assigned to our team, all of whom were incredibly accessible and welcoming.

By the end of the workshop, bedraggled and more than a little sleep deprived, I couldn’t help but reflect on it all with an overwhelming gratitude that still remains. I am immensely grateful to all the SMC math and computer science faculty I have had the privilege to learn from, without whose passion for inspiring and opening doors of possibility for their students I might not have encountered this opportunity, nor would I have realized my passion for statistics. I am grateful to have had the opportunity to interact with JPL engineers and learn from their enthusiasm for and pride in their jobs that it is possible to find a path where you are fulfilled and challenged every day.  I am grateful for the entire NCAS experience and the opportunity it provided to come from almost no programming background to being recognized by my team mentor for my contributions and awarded team MVP. And most of all, I am grateful for the privilege of reinventing myself and emerging on a path where, if you’ll forgive me for shoehorning a terrible calculus joke in here, the limit does not exist.