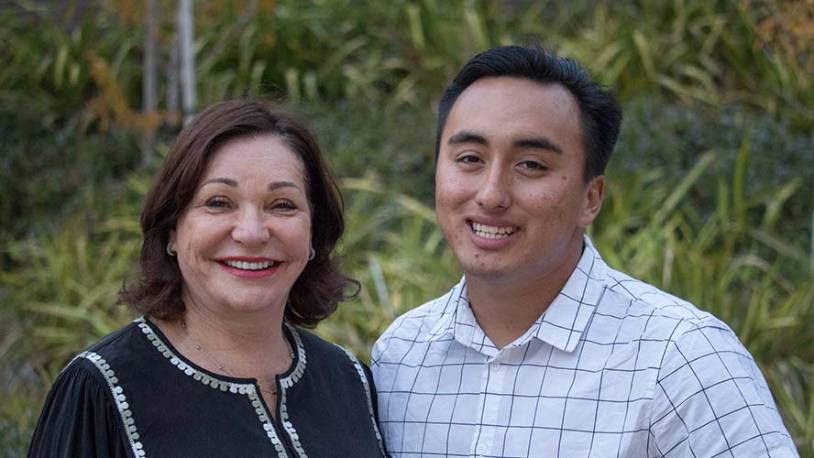 Sometimes you need a little help along the way, and the toughest thing can be asking for it.

Eladio Gonzalez Cabrera was five when he and his mother made the perilous trek from El Salvador to the United States. Like generations of immigrants before them, they wanted a better life and were prepared to work as hard as possible. Now in his second year at Santa Monica College, Eladio is determined to overcome any obstacle — and there have been plenty.

“For the longest time, I couldn’t tell the story without crying,” he says of the journey to the U.S. Despite being so young at the time, he recalls each detail vividly. “We had to cross mountains, and at night you couldn’t see anything. I didn’t even understand what was going on. In my 5-year-old mind, I just thought we were going to another part of El Salvador.”

When they finally made it, and he understood this was their new nation, Eladio’s heart swelled with pride. Yet he never wanted to forget his roots or the culture he left behind. “My mom would always tell me: ‘Yes, we are immigrants. Yes, we came from another country. But be proud of where we’re from and who you are.”

And Yet He Persisted

In primary school, Eladio struggled with English and was bullied — an experience that continued into high school. By high school, though, he regularly made the honor roll. As a freshman, he applied for Deferred Action for Childhood Arrivals (DACA) status.

By graduation, he thought he was on his way to studying at California State University, Northridge. But limited financial aid and no housing support interfered with his plans. Eladio faced a lengthy and complicated commute from his home in South Los Angeles — definitely a roadblock for someone without a car.

He worried that financial obstacles would end his educational journey. But then a friend suggested he try community college, and Eladio found SMC. “I came to SMC kind of by chance, but it’s been a great blessing,” he says.

SMC Professor Lourdes Arévalo first met Eladio at Camino al Exito, a summer event held by the Adelante program at which incoming Latino students and parents learn about college life and its expectations. “He approached me and was just so excited to start his journey at SMC,” she recalls.

“I’ve seen him grow in confidence since that first semester,” Lourdes says. “Beyond being a dedicated student, he’s also become this empowered young man.”

Eladio’s confidence did not come easily, as many obstacles stood in his way — some of which, he admits, were self-imposed. Because of the sacrifices his mother made in bringing him to the U.S., he felt immense pressure to succeed on behalf of his family. “I thought I had to be a doctor and do all these things to make my mother proud,” he says.

Unfortunately, this drive for success added to his anxiety — especially as working two jobs left little time for the study required for his 19-unit course load. His grades deteriorated, adding to his worries, which further hurt his concentration.

His stress grew, but, in addition to supportive professors and classmates, Eladio had another resource he could turn to at SMC: the Center for Wellness and Wellbeing. “Don’t be ashamed to go to the Wellness Center,” he often tells other students. “If you have to find a therapist, that’s more than okay. You’re working on your mental health. You’re working on yourself.”

To aid others on their own journeys, Eladio serves as an SMC President’s Ambassador. The group is SMC’s student face to the community — acting as resources for new students, helping at events, giving tours of SMC, and promoting campus involvement and academic excellence.

A Spark of Motivation, and Then Some

Professor Judith Douglas, who chairs SMC’s Dance Department, met Eladio when he took her Dance History course. Eladio entered the class knowing nothing about dance but wanting to explore it because of his interest in history and culture, as well as the need to fulfill a humanities requirement.

“He just had such an open attitude to knowledge that I saw something special,” Judith says. “In some students, you see a little twinkle — a spark of motivation — that is the embryo of success.”

Even though not a dancer, Eladio is the sort of student Judith prizes. “Seeing his desire to learn and to succeed — despite the obstacles — and stoking such energy is the pleasure of our job at SMC.”

Eladio wants to transfer to a University of California campus or California State University to major in Latin American history. Just as his mother urged him to take pride in his roots, he says that SMC has taught him to appreciate where he is. “Be proud that you are at a community college, that you are getting an education. I feel that culture at SMC,” he says.

“Eladio really inspires me,” Lourdes says. “He’s always asking himself how he can do things better — how he can get the most out of a situation. I just feel like whatever he plans to do with his life, he will help lots of people. I’m so happy that he landed here at SMC — not only for his benefit but also for the college’s.”

Ultimately, Eladio’s time at SMC will have been a crucial step forward on his journey to success — but, for now, it’s also a home.