Master of the Paddle: Ari Ariatta 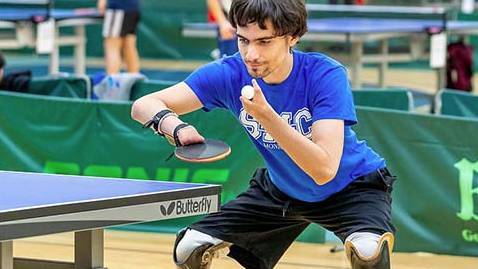 Ari Ariatta isn’t one to brag about his accomplishments, but there is one fact he is proud of: “The highlight of my athletic career was winning the Silver Medal at the 2015 Pan American Paralympics Games in Toronto, Canada, the highest stakes tournament I’ve ever played in.”

A Computer Science major at Santa Monica College, Ari is a member of SMC’s championship Table Tennis team, which qualified to compete at the national table tennis tournament in Greensboro, North Carolina, April 12-14, 2019, run by the National Collegiate Table Tennis Association (NCTTA). In March this year, SMC was awarded the West Southern California Championship trophy in recognition of their triumphs over UCLA, CSUN and Cal Poly SLO at NCTTA’s regional competition. SMC is the only community college in this tournament competing against four-year universities.

Ari has been playing table tennis since he was 12, inspired by his father’s passion for the sport. He practiced in local clubs and began participating in tournaments. Now 24 years old, he competed internationally with the USA Table Tennis team from 2012 to 2016. “I actually won two gold medals at the U.S. Open in Singles, and between 2011 and 2015 I brought home at least one medal from every tournament I participated in.”

And that included playing against competitors who were less severely disabled than he is.

He was born with a congenital abnormality called dysmelia, a deformation affecting both his hands and his legs. It means, literally, “bad limb,” and Ari said, “I have two prosthetic legs and tie the racket onto my hand to play.”

One thing Ari’s SMC table tennis coach Kamran Khairzad is clear about; he never thought of Ari as disabled. “He’s a very good athlete, his skill sets, his focus, the way he competed in the last tournament and finished without losing a single match, his dedication to the sport, his passion to show up, to be on time and to practice are just amazing.”

A graduate of New Roads School in Santa Monica, Ari went directly to San Diego State University to study computer science. But after four semesters, he was sidelined by depression. First diagnosed at age 12, he had been taking medication and going to talk therapy. By age 18, on his way to college and feeling more secure, he stopped the talk therapy.

He said there’s a family history of depression. “My cousin committed suicide and my mother has also been diagnosed. My therapist says that my physical condition is a player in my poor self-image but I don’t think that’s the sole cause.”

Ari felt that his parents weren’t supportive. “I think they were doing a bad job of communicating. I’d be having mental health issues, and on top of needing to deal with that, I had to hide it from my parents or they’d angrily tell me what I already knew they thought, and not offer me the kind of help I needed.”

These days Ari feels there are several positive influences helping him to make a turnaround. He’s resumed talk therapy. He persuaded his parents to engage in family counseling and now feels they have a good relationship. Plus, he has had a girlfriend, Storm, for the past two and half years. She lives in San Diego and they’re talking about moving in together, since he wants to complete his BA degree, either at UC San Diego or at to San Diego State University, which he left in good standing for medical reasons.

Once he’d enrolled at SMC in Fall 2018, Tiziano Aiello, one of his table tennis club mates and a member of SMC’s team, encouraged him to join. He tried out with Coach Khairzad and made the team, quickly distinguishing himself as the team’s fourth strongest player.

Significantly, it’s made a big difference in Ari’s life. “I was kind of burned out on competitive table tennis and had only been playing once or twice a week with the clubs just for fun.” The USA Table Tennis team, he says, receives very little institutional and other support, and he says, “No one even cheers for anyone else on the team, there’s no team practice and everyone just plays the game their own way.”

Unlike that experience, Ari said that playing with at SMC “has been the most fun I’ve had with table tennis in a long time.”

Coach Khairzad notes that SMC Table Tennis began more than 40 years ago, thanks to then-professor, now retired Athletic Department Chair Jo Kidd. Even though it is an Olympic sport, he said, it’s not taken seriously in the U.S. But, he says, “We’re actually better known internationally than locally and a number of students come to SMC because they’ve heard of our table tennis program.”

The SMC Table Tennis Program — an inductee into the California Table Tennis Hall of Fame — has a storied history that includes the late Glenn Cowan, an SMC student from 1969 to 1972, who was the youngest member of the U.S. table tennis team to compete in “Ping-Pong” diplomacy that helped open the door to diplomatic relations between China and the United States.

Ari’s in a place of transition right now. “At the time I signed up for Computer Science, I was still interested in competing in tournaments overseas. With a laptop, you can work from anywhere in the world. But for the past few weeks I’ve been telling myself that I need to take a career aptitude test, which I know is available on campus, to see if I should change my major.”

And whether or not he’ll compete in the future, he says, is still up in the air. Still, said Coach Khairzad, whatever he decides, “Ari has the skill set to be a great coach. And I think that he could continuing competing successfully worldwide in his category.”

There is one thing that Ari would like people to know about him. “The part of being disabled that I struggled with the most growing up was not feeling ‘less than’ so much as ‘other than.’ Telling people who are disabled that they’re inspirational for doing what ‘normal’ people do regularly is like saying, ‘Hey, remember, you’re different.’ I really don’t want to be reminded of that. I’m just trying to live a good life, have good friends, and be ‘normal’ – in air quotes – like everyone else.”

To find out more about the SMC Table Tennis Team.