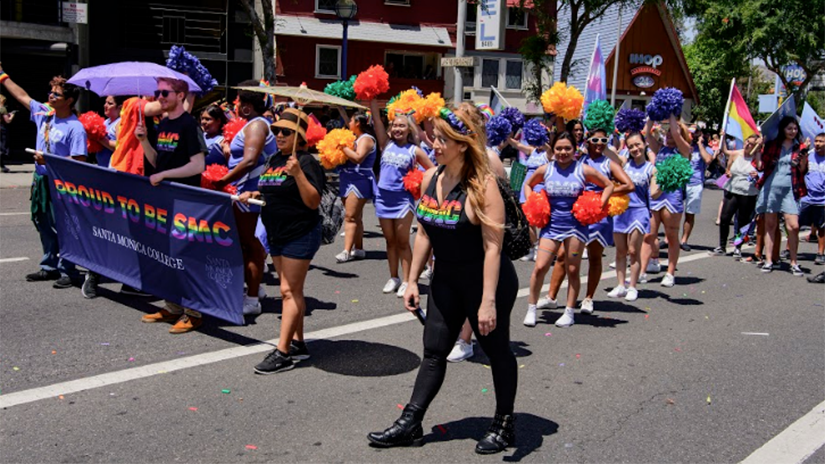 All-gender restrooms benefit all people, including transgender and gender diverse individuals, people who require the assistance of a caregiver of a different gender, and parents with children of different genders.

Currently there are four all-gender bathrooms at SMC: 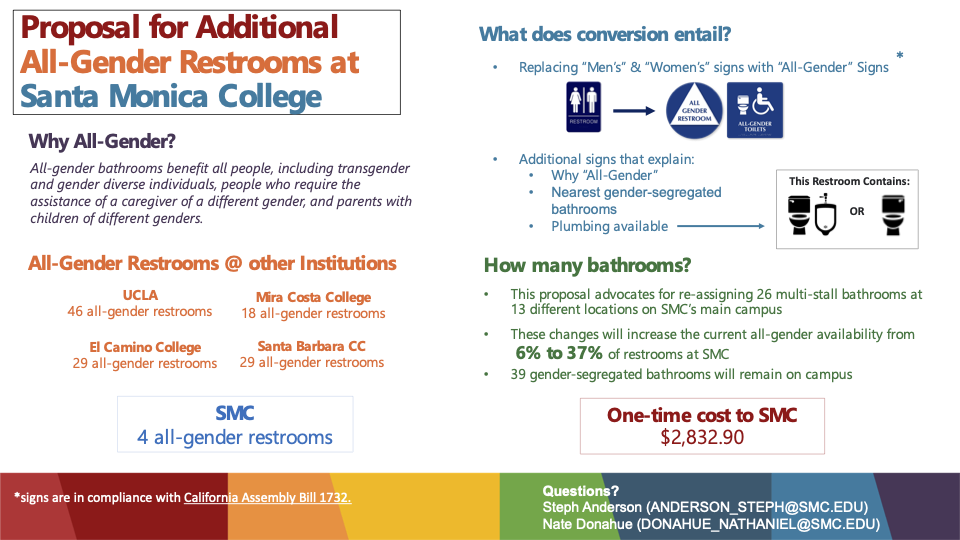 To learn more about our proposal, check out the documents below:

How can I show my support for the Pride Center’s Proposal for more All-Gender restrooms?

Although using a public bathroom is an uneventful experience for many people – particularly heterosexual and cisgender people – for many LGBTQ+ folks, using public bathrooms continue to be physically and psychological unsafe due to their disproportionate risk of experiencing overt violence (i.e., physical, sexual, and verbal assault), as well as subtle forms of gender policing (i.e., prolonged stares, double-takes, audible gasps, being asked to leave, etc.).  All-gender restrooms provide safe(r) access to bathroom facilities for LGBTQ+ students and environmentally signal that they belong and are valued. All-gender bathrooms benefit all people, including transgender and gender diverse individuals, people who require the assistance of a caregiver of a different gender, and parents with children of different genders.

The short answer: no, cis women are not at risk of experience more violence in all-gender bathrooms. Although opponents of bathroom nondiscrimination laws (i.e., laws that allow trans people to use the bathroom that coincides with their gender identity) argue that all-gender bathrooms increase rates of sexual assault and voyeurism, many studies have found these concerns unwarranted. In a recent study, for example, relative to public localities that made no changes to their bathrooms, localities that created gender-inclusive public bathrooms did not see an increase in the frequency of assault, sex crimes or voyeurism. Simply stated, public fears about safety and privacy violations are empirically unfounded.

It is important to note that a sign that says “women,” does not prevent people who want to harm cis women from entering. Someone who is intent on causing harm will do so regardless of the sign outside.

Contrary to public discourse, trans people – particularly trans women of color – are most at risk for experiencing physical and sexual harassment in public bathrooms. Importantly, these crimes are disproportionately perpetrated by cis men – not trans people.

The Pride Center’s proposal advocates for converting 26 bathrooms across 13 locations on SMC’s main campus. This means that at each location both the previously identified “Men’s” and “Women’s” restrooms will become all-gender.

Because the proposed changes do not entail physical renovation of plumbing facilities, the total one-time cost to SMC is only $2,832.90.

Yes! If all proposed changes identified on the Pride Center’s proposal are implemented, 39 gender-segregated bathrooms will remain for public use on SMC’s main campus.

No problem. Simply follow the directions to the closest Men’s and Women’s restrooms.

Yes! The following groups, committees, programs, and faculty have endorsed the Pride Center’s proposal for additional all-gender restrooms at SMC:

If you are a SMC student or alumni, sign this petition to tell SMC leadership that we need more all-gender bathrooms!”

If you are a LGBTQ+ student, faculty or staff member, consider sharing a testimony about your experience navigating gender-segregated bathrooms. Your stories and experiences are important for further demonstrating to SMC leadership that our community needs and wants these physical changes to our campus. You will have the option of sharing your experience anonymously if that is most comfortable.

If you are a LGBTQ+ ally, you can also share your perspective on why SMC needs more all-gender bathrooms! The more voices, the better!

We're always looking for ways to build our community. If you're interested in getting involved during the Spring 2022 semester regarding events and programming related to all-gender bathrooms, reach out to Professor Steph Anderson (ANDERSON_STEPH@smc.edu).