How Aqueelah English Found Herself Again 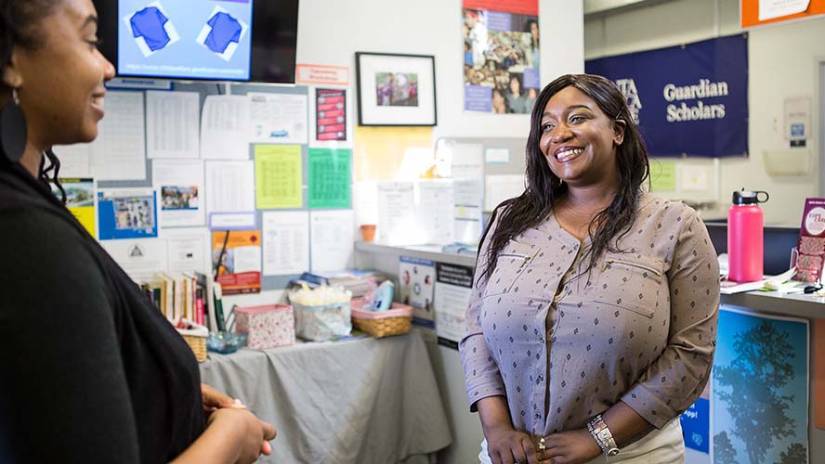 Aqueelah English was at a crossroads in her life when she discovered Santa Monica College and the Guardian Scholars Program for current and former foster youth enrolled at the college. She had lost nearly everything but found herself again at SMC.

Aqueelah had fled a violent relationship in Antelope Valley to start over with her 12-year-old son in Las Vegas, only to be followed there by her abuser. Despite having two restraining orders against him in California, Aqueelah found herself in jail after he stabbed her and lied to police about what happened. She took a plea deal after prosecutors threatened to permanently take away her son, whose father died in 2009. Meanwhile, her abuser trashed her apartment and destroyed most of their belongings.

The only possession she still had was, fittingly, a Ford Escape, and she and her son made the vehicle their home after returning to Los Angeles County. “I had a criminal record and no one would rent to me,” she recalls. “We would bathe at McDonald’s. That was our daily routine for six months.” Eventually the vehicle was also repossessed.

Aqueelah found help at a mental health center on Sepulveda Boulevard. “They were very caring and part of my healing process,” she says. They also helped her secure emergency Section 8 housing. Soon after, she found her path to SMC.

“I knew I needed a change in my life, and I wanted to advance myself,” she says. “I knew SMC was No. 1 in transfers. I wanted a better future for myself, and for my son. I felt at home at SMC right away.”

Aqueelah already knew exactly what she wanted to do with her life by the time she arrived at SMC. “After being done so poorly by the legal system, I want to make sure no other woman would have to endure what I went through,” says the aspiring lawyer and advocate for those who have suffered from domestic violence.

She adds: “Those people gave me a record, but I didn’t accept that record. I thought to myself, ‘How many women has this happened to? How many times has the system failed them?’ Those women have effectively been silenced. And I cannot be silent.”

“I was so excited and on fire to be at school,” Aqueelah says. “I’ve always felt as though education is the key to the world’s problems, to be honest. Even if we have external differences, our education will unite us. Education is so fundamental.”

She volunteered for anything and everything at SMC, and earned a 4.0 her first semester — an achievement she has continued from day one.

In addition to being a Guardian Scholar, Aqueelah is a member of Black Collegians; the Adelante Program, which focuses on academic achievement, transfer and cultural awareness, as well as personal growth; Extended Opportunity Programs and Services, which supports students challenged by economic and educational disadvantages; and honor society Alpha Gamma Sigma. She is also enrolled in SMC’s Law Pathway program, which helps traditionally underrepresented students interested in legal careers to become competitive applicants to law school.

With her academic strength and obvious drive, Aqueelah is already carving her own path toward helping others achieve justice. She has her sights set on an Ivy League education after she finishes her SMC dual degrees in political science and public policy in June 2020.

Aqueelah is also the first student accepted to the Ready to Succeed program in a new partnership between SMC and the Los Angeles-based nonprofit focused on helping foster youth achieve success in college and in their careers.

“We started Ready to Succeed in 2016 with the idea that there were these amazing students who had made it so far through grit, resilience and motivation and all of that to get to college, but then there was not a lot of support once they got there. That seemed tragic,” says Romi Lassally, who founded the organization in partnership with former SMC Foundation Board Chair Patrick McCabe, who previously established the lower school of New Roads School.

“We thought that the real thing these kids were missing was access — access to resources, opportunities and relationships,” Romi adds. “We aim to turn what has been a vicious cycle into a more virtuous one.”

Through Ready to Succeed, Aqueelah earned a coveted summer internship at a local family foundation, which she started in May.

“I’m learning so many invaluable skills and leadership, and it’s just a great position,” Aqueelah says of her internship. “It’s a great place to be at this point in my life. I’m the happiest I’ve ever been. It’s just phenomenal.”

Although he doesn’t yet share her passion for education, Aqueelah’s son is thriving as well. “All of my hard work is ultimately for him, and I want to leave behind a great legacy so he will never, ever have to endure poverty or any other type of struggle,” she says.

She also wants to help other students who feel like their life is over and that they should just throw in the towel. “Life was very hard for me, but I did what I had to do,” she explains. “I want to encourage others because I’ve been through this myself.

For more information on the SMC Guardian Scholars program.