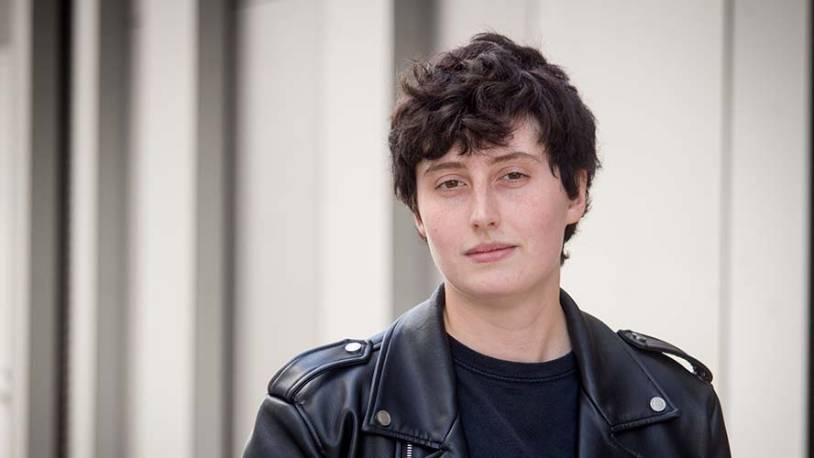 Five years after dropping out of high school, Oliver Harris decided to study at Santa Monica College to give his life structure. But the sense of order he sought quickly became a journey. As a result, he will transfer to Columbia University this winter to keep building an academic career that, a few short years ago, seemed beyond reach.

“I had hit rock bottom after having two friends pass away,” says Oliver, a psychology major. “And I really needed somewhere to start over, but this time really put in the effort to do well.” SMC turned out to be that place.

However, having been away from learning (except for the hard-knocks kind) for so long, his return to education hit some early bumps. “I got my first paper back, and I didn’t do so hot,” Oliver recalls. But instead of the discouragement he felt five years earlier, the poor grade merely spurred him on. “I’m going to study and get an ‘A,’” he resolved.

So he buckled down, and soon the As kept coming. He credits Jean Paik Schoenberg, associate professor of English, for the initial push. “In that one essay composition class, I finally learned how to formally think,” he says. “Now I write essays for fun and show them to my friends.”

But then Oliver has always loved writing. As far back as those two years of high school, he was already writing novels. After those unsubmitted efforts, he believes his sixth book — a psychological thriller — is ready for publication. “I have a list of agents. I just need to stop being lazy and send in query letters,” he says.

Like Magic Actually, even when hitting bottom, laziness was never one of his problems. When he was younger, he loved magic and even worked nights and weekends at Hollywood’s famous Magic Castle to learn tricks of the trade. After leaving school, he divided his time among three jobs. “I was a supervisor at Starbucks, worked at a gas station and delivered pizzas,” he says.

“Those jobs were all in Malibu, a nice place but a really small town,” he says. “So I’d serve someone coffee in the morning, and they’d stop in the gas station and say, ‘Oh, you’re here too?’ Then they’d order a pizza, and be like ‘Again?’” he continues, laughing.

After starting at SMC, Oliver, who describes himself as coming from a “busted-up family,” was also motivated by a desire to fulfill his father’s faith in him. Even though circumstances prevented them from being close during Oliver’s formative years, the men have made up for lost time by reconnecting ever since he moved in with his dad.

“My dad’s the most generous guy in the world,” Oliver says.

A New Job By that point, his confidence and skills had grown to the point where SMC hired him as a math teacher for its supplemental instruction (SI) program, which provides free class sessions to students having difficulty in certain classes. Oliver has taught courses in Math 50 (pre-statistics) and Math 54 (elementary statistics), creatively engaging groups of students to enhance their understanding of core concepts and improve their study skills. “It was a great opportunity,” he says.

As an aspiring novelist with a background in magic, creativity is not a problem for Oliver. After all, magic is an art in which math skills also come in handy (especially when it comes to complicated card tricks). It is also a discipline that depends on appearing effortless but cannot succeed without the sort of hard, focused work that Oliver applies to everything he does.

Five Factor While at SMC, Oliver even stretched the college’s capacity in his major. “There’s no sort of psychology lab at SMC, so I made my own,” he says.

Oliver is delaying his first semester at Columbia to finish analyzing the data. Not content with replication, however, he is also pursuing a project that examines how certain emotions “load onto” particular traits. If his work — which he plans to continue after transferring — bears fruit, Oliver says, “we’d be able to reliably predict how people would respond” to specific situations.

Guided Pathway Jenna drew upon this aspect of Oliver’s inquisitive imagination when recruiting him to serve on the student advisory squad for SMC’s Guided Pathways project, which aims to reshape the college experience, enhancing both equitability and efficiency.

One aspect about SMC that Oliver feels needs no adjustment is its supportive faculty. “A lot of the professors were absolutely amazing to me,” he says.

Oliver feels that coming to SMC changed his life. “I didn’t expect much from myself when I took that first English 1 class, but SMC has led me to conduct psychological research, publish a collection of the Writers Club best works and even teach statistics in my own classroom.” And now his next stop is New York and the Ivy League.

“Oliver did all the work,” Jenna notes. “I just planted the seed.” And she expects Oliver’s future to keep blossoming.