Delayed a year due to the pandemic, the West Coast premiere of Birds in the Moon paired The Broad Stage with SMC art students in creative new ways that set a template for deeper partnerships to come.

Birds in the Moon

Birds in the Moon: Student artists at awards ceremony 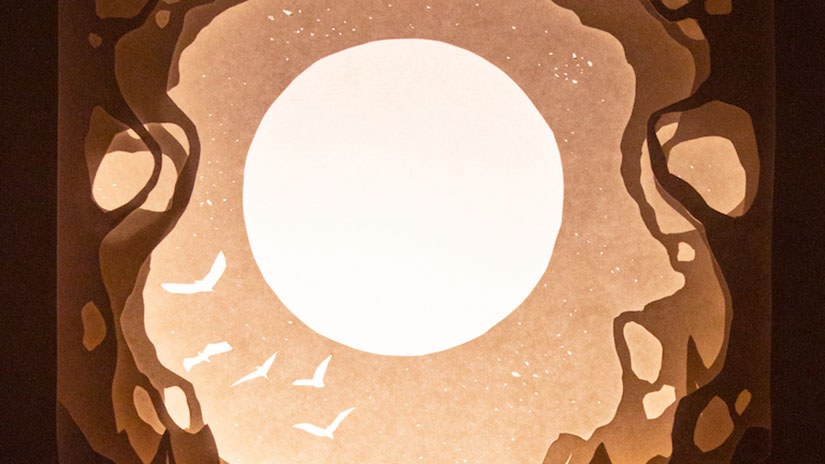 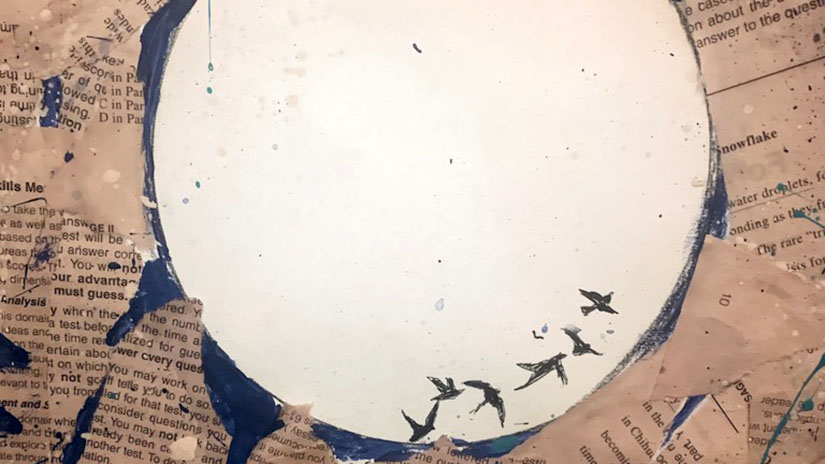 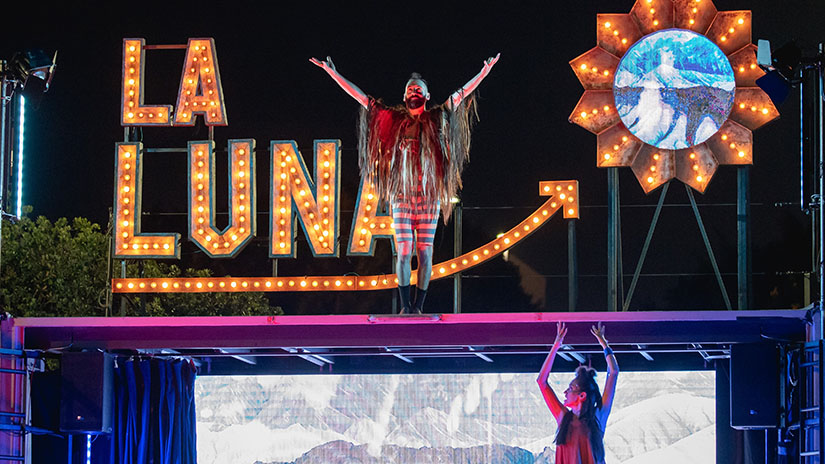 Birds in the Moon, Opening Night 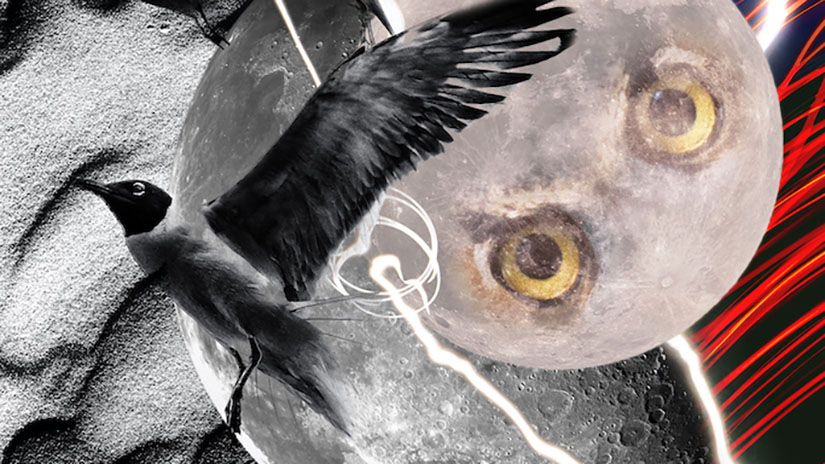 After more than a year’s hiatus, The Broad Stage at the SMC Performing Arts Center returned to in-person performance in early September with the West Coast premiere of a new “mobile” chamber opera, Birds in the Moon, by composer Mark Grey and librettist Júlia Canosa i Serra. The four-night run was staged on a public parking lot at the corner of Arizona and 5th Street.

The outdoor venue had nothing to do with pandemic restrictions, however.

Years in the making, this new opera—partially commissioned by The Broad Stage in conjunction with San Francisco Opera—was conceived as a road show in a deliberate gesture at the plight of migrants. The plot is loosely based on fables and folk tales about the secret migration of birds to the moon—an arduous journey that holds out the dim hope of sanctuary. The opera’s principals are a half-starved mother bird crossing a wasteland and the traveling showman who exploits her for his own ends.

To feed her concealed child and build up strength for their moon flight, the mother bird agrees to perform her birdsong as entertainment. Enslaved by the ringmaster, she eventually is forced to weave her feathers into a flight suit and teach him the mechanics of flight. At the dramatic climax, she sings:

The three laws of flight…

Thrust cannot be learnt.
It must be in you.

Mobility being the central theme of the narrative, a modified shipping container appropriately serves as the opera’s theater-on-wheels. In what The Broad Stage artistic/executive director Rob Bailis calls “a high-wire act with no net,” the production takes many bold risks: a cast of two, one singer and one speaking actor; a wall of video; a hydraulicly unfolding, multilevel stage; and a live string quartet interacting with a recorded electronic score.

Each performance also must factor in the uncertainty of sporadic, extemporaneous street noise. On opening night, passing cars, the sigh of Big Blue buses stopping for passengers and a siren’s wail merged with the opera’s carefully crafted soundscape. It all worked. As if on cue, a flock of seagulls cawed overhead. Who knows? Perhaps they were headed for the moon.

Walter Meyer remembers “getting goosebumps” the first time he heard of the Birds in the Moon project. It was more than two years ago

As the new SMC Art Department chair, he was meeting for the first time with Ilaan Mazzini, then-director of education at The Broad Stage. They were brainstorming on possible synergies between the world-class performing arts center and its close campus neighbor, the Pete and Susan Barrett Art Gallery.

“When Ilaan mentioned Birds in the Moon, I just got so excited,” Walter recalls. They came up with a plan to invite faculty to integrate the avant-garde chamber opera into their courses and challenge students to create visual art inspired by it.

A drawing class got on board in fall 2019, and a few more classes joined in spring 2020. “Then the pandemic happened, and the fall 2020 premiere got pushed back a year,” he says.

The delay turned out to be a blessing in disguise. An extra year allowed Ilaan and Walter to partner in surprising new ways.

By early 2020, Ilaan’s team had completed their Birds in the Moon Learning Guide, brimming with information calculated to spark student creativity. She gave Walter access to the opera’s full libretto and a plethora of production-related resources—storyboards, costume sketches, technical drawings and sets for the souped-up shipping container that stage designer Chad Owens had needed 20 months to assemble.

Having access to such rich source material boosted interest across disciplines. When Walter approached his faculty again to urge them to integrate Birds in the Moon in their courses, the response was overwhelming.

Next, the art students were invited to a pair of Zoom master classes with the opera’s creators.

In the first session, held in mid-September 2020 and archived here, composer-sound designer Mark Grey and stage director Elkhanah Pulitzer, along with other key players, spoke about their artistic backgrounds and gave an overview of the themes and ideas behind Birds in the Moon.

Barrett Gallery director Christopher Badger attended the session and invited students to submit their opera-related artwork for a virtual exhibition he would curate. Students whose pieces were accepted later received $25 bookstore gift cards as prizes.

Ilaan set up a second remote master class for the spring. The Birds in the Moon creative team regrouped to discuss specific examples of their artistic thought-processes and how the collaborative project evolved.

Attendance for both  Zoom meetings was off the charts, according to Ilaan, with nearly 200 Corsairs logging in.

“This is the most engagement for a master class or a workshop that we’ve ever had in a program between the Broad Stage and an SMC department,” she says.

After looking at student submissions in the second master class, the Birds in the Moon creative team chose three they liked best. Juanita Hernandez, Esme Ison and Moeka Ito received $250 honorariums from The Broad Stage, presented at an award ceremony before the September 3 performance, with SMC President Jeffery in attendance. Juanita was separately commissioned by the opera’s marketing team to create graphic images supporting their efforts.

“For students to have a chance to work so closely with the creative team was just amazing,” Walter says. “That’s why we’re here. That’s why SMC exists! To give students these opportunities.”

Look for more creative collaborations in the future as The Broad Stage transitions from being primarily a performing arts presenter to underwriting new work. Five new commissions are currently in progress.

“This Birds in the Moon project has become a template for us on how to go deeper with the college,” says Ilaan, who six months ago was named director of programs and activations at The Broad Stage. “This is the first of what we think will be an ongoing series of collaborations between the SMC Art Department and Barrett Gallery.”

More indie opera is coming. In a fresh take on Beethoven’s Fidelio, New York-based Heartbeat Opera will explore the concept of restorative justice in an edgy new production. The staging features recorded audio and video of hundreds of incarcerated men and women from prison choirs superimposed over the famous Prisoners’ Chorus scene. Plans for panel discussions, workshops, master classes and educational collaborations with the SMC Art Department are underway.

Having to postpone the West Coast premiere of Birds in the Moon by a full year “helped us understand the time-frame it takes to make curricular ties really happen and led to a snowball of ideas and opportunities,” Ilaan says. “It's a great example of how we can to be doing more together.”