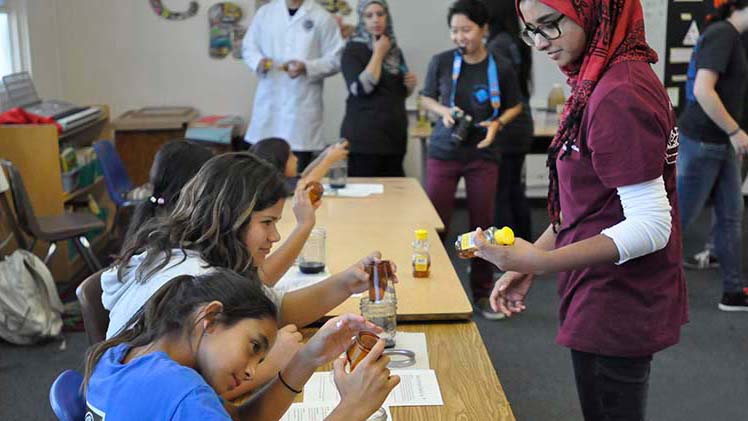 What do you get when you put together a group of dedicated students and professors, a passion for one of the oldest scientific disciplines, and a desire to do something good? It’s a winning solution called the Santa Monica College Chemistry Club. This March, the American Chemical Society (ACS) will recognize this student-run SMC club – which became a recognized student chapter of the world’s largest scientific society in 2012 – with an “Outstanding” recognition, ACS’s highest.

“When I found out that we got this recognition, I was over the moon!” says Dr. Jennifer Hsieh, SMC chemistry professor and faculty advisor to the Chemistry Club. “It took a lot of work from many dedicated students – and I can’t tell you how proud I am of them.”

Elsa Avila, SMC alum and freshman at Cal Poly Pomona was one of those students. She became the Chemistry Club’s Outreach and Activities Coordinator after its “rebranding” as a student chapter of the ACS, which included adopting a constitution that reflects the society’s values, with three main goals of outreach, professional development, and promoting chemistry. Elsa remembers the time she organized outreach trips for the club to Kenter Canyon Elementary School in Los Angeles, and to Franklin Elementary School in Santa Monica (outreach like this is a large part of the reason for the club’s recognition by the ACS’s Committee on Education).

“It seemed that what the kids were experiencing was completely new to them,” reminisces anthropology major Elsa, who hopes this year to also double major in chemistry. “Their expressions were priceless, and it was amazing to see.” Last year, the club also organized outreach to Will Rogers Elementary School, just a stone’s throw away from SMC’s main campus.

Elmer Landaverde, a programs coordinator for the City of Santa Monica – who helped coordinate the outreach event at Will Rogers – says that the opportunity the SMC students offered the 4th and 5th graders to experience something new, and that may spark an interest in chemistry, is priceless.

In a November 2015 article, the SMC student newspaper the Corsair gave an insider’s view on the excitement that the children felt as the college students demonstrated concepts like density, using fun things like smelly cooking products and fake eyeballs. This year, the club also plans to host students from John Adams Middle School in one of SMC’s labs for a “Science Saturday”, a day involving fun with science.

Co-advisor and SMC chemistry professor Dr. Travis Pecorelli points out that the club is not just for chemistry students. Last spring, he and Dr. Hsieh took Chemistry Club students to an academic conference organized by the Association for Women in Science, as part of the club’s professional development objective. “They had no idea what was going to be involved,” says Dr. Pecorelli. “But they really enjoyed it!”

Within just three years of becoming a student chapter of ACS, the SMC club has “hit their stride”, says Dr. Hsieh. Highlights including inviting prominent speakers like Kevin Grazier (science adviser to the Oscar-winning movie Gravity and the TV series Battlestar Galactica, among others); Amy Berg, a science fiction writer; and a panel of speakers who talked about their experience of being in graduate school and PhD programs in the sciences (tuition for PhD programs are funded by the program itself, and students get stipends for living expenses – an advantage many students don’t realize, says Dr. Hsieh).

The club also hosted a first-ever “Chemistry Olympics” and by its third year (2014-15) had redesigned their outreach program from a chemistry “magic show” demonstration to a smaller, safe project that an elementary school student could set up with a little help from SMC students, and take home to share with their parents. For example, at Will Rogers last fall, the children who participated in the club’s density demonstration took home Mason jars filled with a “witch’s brew” of molasses, honey and cooking oil topped off with a fake eye-ball – just in time for Halloween.

Professors Pecorelli and Hsieh, and a delegation of students from the Chemistry Club will travel to San Diego in March to receive the award of outstanding recognition – one not even their counterparts at UCLA can claim.

“The thing I am most proud of is that we’ve created this family,” says Dr. Hsieh. “Club members keep in touch, even after transferring, and continue to support each other. What more could I ask for?”

The club plans on continuing with “great programming” at their weekly meetings, and hopes that their outreach events will evolve into something campus-wide, says Dr. Hsieh. “Maybe something where families in the community can come to campus for a day of science.”